This morning, I am going to tell you another story about the C.D.C. and its approach to Covid-19 behavioral guidelines. It’s a story that highlights the costs of extreme caution.

When Dr. Rochelle Walensky, the C.D.C. director, appeared before a Senate committee this month and defended the agency’s description of how often Covid-19 is transmitted outdoors, she cited a single academic study.

She was responding to a question from Senator Susan Collins of Maine, who had asked why some C.D.C. guidelines seemed inconsistent with the available data. Collins quoted from that day’s edition of this newsletter and argued that the C.D.C. was exaggerating the risk of outdoor activities by claiming that “less than 10 percent” of Covid transmission occurred outside.

Anything close to 10 percent would mean that outdoor infections were a huge problem. Yet the true share appears to be closer to 0.1 percent.

Walensky replied that the 10 percent number came from a study published in The Journal of Infectious Diseases. The study was “a meta-analysis,” she explained, which means it synthesized data from other studies. “The topline result of all studies that were included in the systematic review said less than 10 percent of cases were transmitted outdoors,” she said.

Her answer made the study sound definitive. Walensky did not mention any other studies or offer any logical argument for why she believed outdoor transmission was a significant risk. She implied that the C.D.C. was simply listening to The Journal of Infectious Diseases, which, as she noted, is a top journal.

Later that day, one of the study’s authors posted several messages on Twitter, and the story got more complicated.

The tweets came from Dr. Nooshin Razani, an epidemiologist at the University of California, San Francisco. In them, she emphasized that the study’s results suggested that the share of Covid occurring outdoors was “much lower than 10 percent.” The central message of the paper, Razani wrote, was the relative safety of the outdoors: 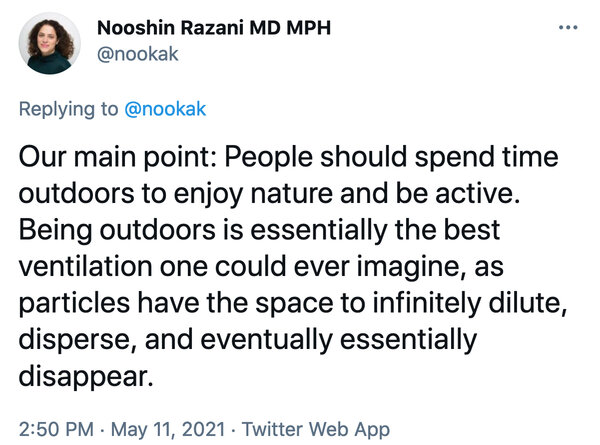 This message seemed quite different from Walensky’s, so I followed up with a phone call to Razani. During it, she explained that the paper was not a meta-analysis, but rather a systematic review. (Walensky, in her testimony, had used the two terms interchangeably.)

To nonscientists, the distinction may seem meaningless, but Razani thinks it is important. A meta-analysis often includes a precise estimate — a best guess, based on the data. A systematic review is more general.

When Razani and her co-authors used the phrase “less than 10 percent” in the paper, they did not consider it to be an estimate, she told me. “We were very clear we were not making a summary number,” she said.

It was instead a literal description of the other research. Most studies in the review found the share to be below 1 percent. But there was one study that somebody might interpret as suggesting the share of Covid transmission occurring outdoors was close to 10 percent. (In truth, many of those cases involved Singapore construction workers who probably transmitted it in enclosed spaces.)

The actual share occurring outdoors is “probably substantially less than 1 percent,” Razani told me. “The outdoors is an amazing resource,” she added. “What we really should be focused on is how to transition more activities to be outdoors.”

Masks for all campers

Yet the C.D.C.’s guidance continues to treat outdoor activities as a major risk — as if the truth were closer to 10 percent than 0.1 percent.

The agency advises unvaccinated people to wear masks outdoors much of the time, and many communities still impose strict guidelines on outdoor activities. The C.D.C. has also directed virtually everyone attending summer camp this year — counselor or camper, vaccinated or not — to wear a mask at almost all times. The camp guidelines use the word “universal.”

It’s true that for many people, masks are a minor nuisance. For others, though, masks bring real costs. Some children find it harder to breathe while wearing one during, say, a game of soccer or tag. Many adults and children find it more difficult to communicate. That’s especially true for people without perfect hearing and for young children, both of whom rely heavily on facial movements to understand others.

Communicating with a mask on, as Kathleen Pike, a Columbia University psychologist, has written, is often “like talking on your phone in a zone with weak cell service.”

For unvaccinated adults indoors or in close conversation outdoors, the costs of a mask are vastly lower than the risks from Covid. But the trade-offs are different in most outdoor settings, and they are different for children. The Covid risks for children are similar to those from a normal flu (as these charts show).

There does not appear to be much scientific reason that campers and counselors, or most other people, should wear a mask outdoors all summer. Telling them to do so is an example of extreme caution — like staying out of the ocean to avoid sharks — that seems to have a greater cost than benefit.

The C.D.C., as I’ve written before, is an agency full of dedicated people trying their best to keep Americans healthy. Walensky, a widely admired infectious-diseases expert, is one of them. Yet more than once during this pandemic, C.D.C. officials have acted as if extreme caution has no downsides.

Everything has downsides. And it is the job of scientific experts and public-health officials to help the rest of us think clearly about the benefits and costs of our choices.

Moderna says its vaccine is effective in adolescents, and it plans to apply for F.D.A. authorization. Half of U.S. adults are now fully vaccinated.

Will the Tokyo Olympics happen this summer? The chorus of critics is growing.

Virus resources: U.S. cases are down more than 90 percent from their peak. Check your state.

Texas lawmakers passed a bill that would allow adults to carry handguns in public without a permit.

Senators Joe Manchin and Kyrsten Sinema — both moderate Democrats — implored Republicans to back the creation of a commission to investigate the Capitol riot.

To avoid U.S. casualties, the military intends to remove all troops from Afghanistan by mid-July, ahead of President Biden’s Sept. 11 deadline.

The latest fighting between Israel and Hamas killed at least 68 children. These are their names.

Militants attacked Palma, a key town in Mozambique, in March. This Times video interviews survivors and shows how Mozambique’s government failed to protect its civilians.

The California town of Corcoran is sinking. Literally.

A trove of literary treasures, including Brontë family manuscripts, is headed to Sotheby’s.

Don’t fall for the diet industry’s post-pandemic “back to normal” fads, says The Times’s Tala Schlossberg.

Rich in protein: It’s cicada season. They’re on the menu.

Not who she says: A scholar faked her Cherokee ancestry. Her career has thrived.

A Times classic: See how climate change is weakening the Gulf Stream.

Lives Lived: As a performer, writer and director, Robbie McCauley often put race at the center of her works. “Our nation is starving for the kinds of courageous conversation that Robbie and her work engendered,” a fellow artist said. McCauley died at 78.

These days, the fastest way to become a food celebrity is not through the Food Network, but on TikTok. The app has spawned viral food trends — like baked feta pasta and dalgona coffee — as well as a new generation of cooking stars who are largely self-taught, preparing meals in their home kitchens.

Within 24 hours of posting his first TikTok in 2019, Eitan Bernath, now 19, had tens of thousands of followers. His upbeat and approachable food videos have since earned him over a million more, and he has three full-time employees, as well as a gig as a resident culinary expert on “The Drew Barrymore Show.”

For many fans, the cooking stars’ lack of professional training is part of the appeal. “I think what TikTok has done with Gen Z and teaching people how to cook, it’s just more relatable,” Bernath told the Times. “The feedback I hear all the time is, ‘If this 18-year-old Eitan can cook this so effortlessly, then I can, too.’” Read Taylor Lorenz’s full story. — Sanam Yar, a Morning writer

This spicy red pesto pasta makes the most of sun-dried tomatoes, nuts and roasted red peppers.

Fifteen years ago, Nora Ephron published “I Feel Bad About My Neck: And Other Thoughts on Being a Woman.” One writer reflects on what she’s learned since then about appearances.

The pangram from yesterday’s Spelling Bee was haircut. Here is today’s puzzle — or you can play online.

P.S. Time magazine’s list of the best podcasts of 2021 includes “Still Processing” and “The Ezra Klein Show.” We recommend giving one a try.

“The Daily” is about Hamas.

Claire Moses, Ian Prasad Philbrick, Tom Wright-Piersanti and Sanam Yar contributed to The Morning. You can reach the team at [email protected].