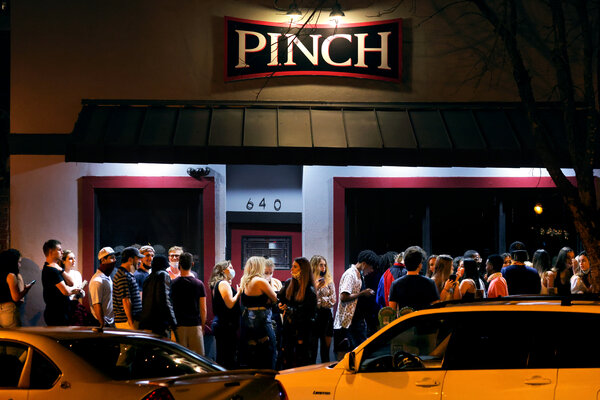 By now, many of the basic facts about how Covid-19 spreads are clear. People tend to become infected by inhaling droplets that come from the mouths and noses of others. Crowded indoor spaces — where infected droplets can linger in the air — are the most dangerous places. They are particularly dangerous when people are not wearing masks.

Yet consider some of the new policies that state governments have put in place this week:

Texas and Mississippi both announced they would lift their mask mandates (following Iowa and Montana, which did so last month) and allow businesses to operate at full capacity.

South Carolina will allow gatherings of more than 250 people.

In announcing the changes, Tate Reeves, the governor of Mississippi, wrote: “It is time!” Greg Abbott, Texas’ governor, said, “State mandates are no longer needed,” while adding that he hoped Texans would practice “personal vigilance.”

People’s desire to return to normal life is understandable. If anything, many medical experts believe that the country has been too slow to restart some activities, like outdoor socializing and, above all, in-person school with precautions. The costs of an unending shutdown — in lost learning, lost earnings and mental-health problems — do sometimes outweigh the reduced risk of Covid transmission.

But many of the changes that went into effect yesterday are different, these same experts say: They represent a rushed return to normalcy, rather than a careful weighing of costs and benefits.

“Ugh,” Tara C. Smith, an epidemiologist at Kent State University, wrote, saying that the Texas changes could cause a rebound in cases. Dr. Leana Wen of George Washington University called the lifting of mask mandates an irresponsible mistake, because masks let businesses and schools safely remain open. Dr. Peter Hotez of the Baylor College of Medicine told The Houston Chronicle: “I would recommend holding off. Let’s wait another two weeks.”

Better does not mean over

It’s true that the Covid news over the past month has been enormously positive. Regular readers know that I think journalists and scientists have sometimes been too dour — to the point of presenting a misleading picture, especially about the vaccines. Still, there is a big difference between a less severe problem and a solved problem.

The pandemic is a long way from over. The number of confirmed new cases has stopped falling in the past two weeks, both in the U.S. and worldwide, perhaps because of the spread of highly contagious new virus variants. In the U.S., the average daily number of cases is higher than at almost any point last summer. Over the past week, more than 2,000 Americans have died each day on average — worse than any point last summer.

“Please hear me clearly,” Dr. Rochelle Walensky, the head of the C.D.C., said on Monday. “At this level of cases, with variants spreading, we stand to completely lose the hard-earned ground we have gained.”

Politicians defended the new round of changes by pointing to the sharp decline in cases since January. And that decline does justify a loosening of some restrictions, many epidemiologists say. It’s even possible that a continuing increase in vaccinations will be powerful enough to overcome the rush to loosen. Nobody can be sure of Covid’s future path.

The question is which risks bring enough benefit to be worth taking. Does it make sense to give people permission to shed their masks? Or crowd into enclosed spaces where they will exchange droplets of breath?

Most scientists say no — and say that the changes have increased the chances of avoidable infection, illness and death.

President Biden said the U.S. would have enough vaccine doses by the end of May to cover every American adult, two months earlier than he previously estimated.

Brazil’s Covid crisis continues to worsen. It’s a warning for the rest of the world, experts say.

Vacant offices and storefronts are driving down the value of commercial real estate in many cities, hurting the tax base.

And employers are wrestling with a question: Does it make sense to go back to the way things were?

Dolly Parton received a dose of the Moderna vaccine, which she helped fund. She tweeted that she had gotten “a dose of her own medicine.”

Neera Tanden, Biden’s choice for budget director, withdrew from the nomination after senators criticized her combative Twitter history. Biden indicated that he would name her to another post.

The Biden administration announced sanctions against Russia over the poisoning of the opposition leader Aleksei Navalny.

Questions from the Supreme Court justices suggested that they are likely to uphold two Arizona voting restrictions. It’s the court’s most important voting rights case in almost a decade, The Times’s Adam Liptak writes.

The F.B.I. has started 2,000 investigations into domestic terrorism since 2017, the agency’s director told senators. He said the threat of extremism had been “metastasizing across the country.”

At least 13 people died in a collision between a tractor-trailer and an S.U.V. carrying 25 people in Southern California. Here’s what we know.

A judge in Mississippi ordered the state to pay Curtis Flowers $500,000, the maximum the law allows, for wrongfully imprisoning him for more than 20 years. (For more: We wrote about Flowers last month.)

Global warming appears to be weakening part of the Gulf Stream, some scientists fear. The changes could bring stronger hurricanes to the U.S. and reduce rainfall across Africa.

Volvo says it will sell only electric vehicles by 2030.

Three media workers in Afghanistan were killed on their way home from work — the latest victims of targeted attacks.

Dr. Seuss’s estate said it would stop publishing six titles, including “And to Think That I Saw It on Mulberry Street,” that depicted “hurtful and wrong” stereotypes.

A Morning Read: Tiny packages. More tiny packages. A snail named Velveeta. It’s “the grocery store of the mind” — and it reminds you of what you’ve been missing.

From Opinion: See what it’s like to work for a company that engineers every aspect of your life — and then makes you livestream it.

Lives Lived: Raised in segregation-era Atlanta, Vernon Jordan first glimpsed the world of power and influence that had largely been denied to Black Americans while he was waiting tables at a private club. He became a civil-rights leader, a Washington lawyer and an adviser to presidents. He died at 85. (We recommend this 2017 podcast interview with Jordan.)

Groove to some Japanese city pop

A 37-year-old song has helped drive a comeback for a genre of music from Japan called city pop.

A YouTube video of the track, “Plastic Love” by Mariya Takeuchi, has garnered more than 56 million views since 2017. For many young fans, it served as an entry point to city pop, as Cat Zhang explains in Pitchfork. The genre is from the ’70s and ’80s and was influenced by R&B and jazz. It often pairs shimmery vocals with funky production, and the result is an effervescent sound.

The YouTube algorithm is partly behind the genre’s online resurgence. Calming, atmospheric music — which can be played in the background on repeat while users work — is popular on the platform. Many of those listeners end up discovering city pop in their video recommendations. As Rolling Stone reported, a Reddit user trying to identify the source of the genre’s sudden popularity wrote, “citypop is also known as youtuberecommendationcore.”

The songs also reach new audiences through TikTok. One trend on the platform, Zhang writes, had users of Japanese descent playing a 1979 city pop song for their mothers, who beamed and sang along in response.

This mushroom and wild rice soup is made in a pressure cooker. While you wait, take a look at how last year’s best-selling cookbooks show how home cooking has changed.

All it takes is five minutes to make you love tenors.

New titles from Kazuo Ishiguro, Imbolo Mbue, Stephen King and more make up this list of books to watch for this month.

The late-night hosts had a lot to say about Gov. Andrew Cuomo.

The pangram from yesterday’s Spelling Bee was vengeful. Here is today’s puzzle — or you can play online.

P.S. Lisa Lerer, who has written The Times’s On Politics newsletter since 2018, has been promoted to national political correspondent.

Today’s episode of “The Daily” is about Bill Gates and the pandemic. On “Popcast,” jazz debuts that agitate for change.

Tags: A, of, Reopenings, Wave
You may also like
Recent News: