Good morning. It’s Giving Tuesday, and we have a few ideas related to the news. 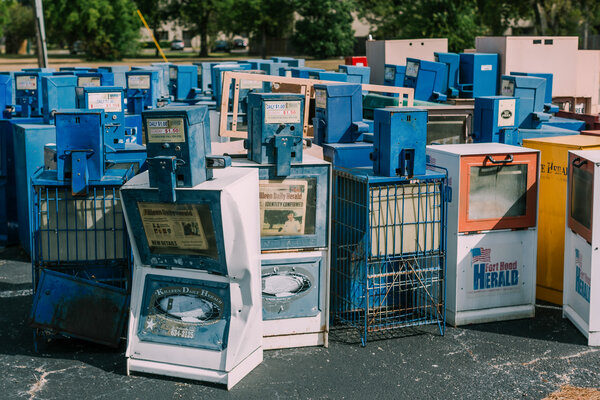 In the internet’s early days, it seemed to have the potential to crush traditional print media. But its impact has turned out to be more nuanced.

The internet has instead been a boon for some publications with a national audience. The New York Times has never had as many subscribers or readers — or employed as many journalists — as it does today. The Atlantic, The Washington Post and some others are also thriving.

It’s at the local level that the digital revolution has been as destructive as feared.

Hundreds of local news organizations have folded, as their advertising revenue disappears, and the pandemic is exacerbating the crisis. At least 60 local newsrooms have closed since March, according to Poynter. Some of them were more than a century old, like The Eureka Sentinel, in Nevada; The Mineral Wells Index, in Texas; and The Morehead News, in Kentucky.

This isn’t a story of creative destruction, in which nimble new entrants replace older companies. Often, nothing replaces a shuttered newsroom, leaving communities without any independent information about local government, schools and businesses. (A recent Times investigation found that some partisan groups have begun posing as local publishers, trying to pass off political propaganda as news.)

There are consequences for society. When a community’s newspaper closes, voter turnout and cross-party voting tend to decline, while political corruption and government waste rise, academic research has found. A democracy struggles to function when its citizens can’t stay informed.

What can be done? Eventually, savvy entrepreneurs may figure out how to make local news profitable. But several have tried in recent years, without success. For the foreseeable future, the only reliable answer seems to involve philanthropy. Americans have long accepted that the arts, higher education and organized religion all depend on charitable giving. Local journalism is now in the same category.

“We need philanthropists across the country to embrace robust local journalism,” Sarabeth Berman, the chief executive of the American Journalism Project, which funds local news sites, told me. “If you care about education, you need to worry if school boards and charter boards are covered. And if you care about the environment, you should make sure reporters like Ken Ward Jr. are covering coal country in West Virginia.”

There are many other shining examples of the new nonprofit journalism. But even more communities receive little to no high-quality coverage.

I decided to write about this topic this morning, because today is Giving Tuesday, when people take a break from online shopping to focus on charitable giving. If you are worried about the state of local news, you can donate through NewsMatch, which matches donations to local publications, or to your local public-radio affiliate.

Moderna says its coronavirus vaccine is more than 94 percent effective, and the company has asked the F.D.A. to authorize it. If all goes smoothly, the drug could begin reaching Americans by Dec. 21.

“The long darkness before dawn”: Donald McNeil, a Times reporter who covers infectious diseases, examines the grim months ahead, when virus deaths will almost certainly surge before vaccines are widely available.

After weeks of lockdown, new cases in England have fallen by 33 percent. The policy is set to end tomorrow, though some regions will keep tight restrictions.

Dr. Scott Atlas, a White House coronavirus adviser who espoused disputed theories, resigned. His term was about to expire this week.

“Teachers are not OK right now,” one educator told The Times. The whiplash of closings and reopenings and the stresses of remote learning have driven many in the profession to exhaustion.

President-elect Joe Biden’s picks for economic advisers suggest his administration will focus on workers and organized labor, including pushes for a higher minimum wage and a stronger social safety net. It’s unclear how much Biden can accomplish if Republicans keep a Senate majority after the Georgia runoff elections in January.

President Trump has raised about $170 million since Election Day, as his campaign has solicited donations for an “Election Defense Fund.” The cash could also fund his next political move.

Election officials certified Biden’s wins in Arizona and Wisconsin despite the Trump campaign’s efforts to overturn the results. And Georgia’s Republican governor, Brian Kemp, rejected Trump’s calls for him to invalidate mail ballots.

A government watchdog said the Labor Department’s weekly jobless numbers suffered from data problems that have often overstated the number of jobless people. The watchdog also found that the government has underpaid many of the people receiving those benefits.

Supreme Court justices reacted with frustration and some confusion to Trump’s plan to exclude unauthorized immigrants from the calculations used to allocate congressional seats.

A white man fatally shot Aiden Ellison, a Black teenager, during a confrontation over loud music in a hotel parking lot in Oregon last week, the authorities said.

True crime: Samuel Little, America’s most prolific known serial killer, has confessed to 93 murders over more than 30 years. The Washington Post explores how he eluded attention by targeting mostly Black women, whose disappearances were often ignored.

Deck the halls: Melania Trump, the first lady, unveiled this year’s White House decorations — a traditional display of green trees decorated with red, gold and silver ornaments and white lights. The bold aesthetic choices that caused snarky memes in Christmases past are absent.

Lives Lived: Debra White Plume faced down police bullets and mining companies as an activist trying to protect the traditional Oglala Lakota way of life. “If somebody wants to label me, I guess it would be water protector,” she once said. White Plume died at 66.

Tony Hsieh wasn’t all that interested in shoes. The technology entrepreneur, who helped build Zappos into an online shoe and clothing powerhouse, admitted as much in media interviews.

His obsessions were customer service and company culture. Those obsessions helped him revolutionize the shoe industry — and ultimately sell Zappos to Amazon for $1.2 billion. Hsieh, 46, died on Friday, from injuries suffered in a house fire.

Hsieh (pronounced “shay”) invested in Zappos in 1999, when it had the less catchy name ShoeSite.com and the concept of selling shoes online was baffling. Shoes seemed like the ultimate product that required trying on in a store. To get customers comfortable with buying them online, Zappos offered free shipping and returns. Hsieh encouraged employees to spend hours on the phone with a customer if that’s what it took to ensure satisfaction, as The Wall Street Journal reports.

He also focused on keeping employees happy — partly so they would provide better customer service. Shortly after making new hires, Zappos would offer them a bonus to quit to weed out less committed employees. Its core values included “Create Fun and a Little Weirdness.”

“Imagine a greenhouse, where maybe at a typical company, the C.E.O. might be the strongest and tallest, most charismatic plant that all the other plants strive to one day become,” he said in 2017. “For me, I really think of my role as more about being the architect of the greenhouse, and then all the plants inside will flourish and thrive on their own.”

Make this spicy, saucy chicken in a slow cooker. Serve it as a stew, over rice or as a taco filling.

There are several new celebrity interviews to read: With Paul McCartney, with Patti LaBelle, with Barbra Streisand and with Dolly Parton.

Learn about the rich, literary life of Louise Fitzhugh, the creator of America’s favorite girl spy. The author of “Harriet the Spy” had much in common with her indelible characters, as detailed in “Sometimes You Have to Lie,” a new biography.

The late-night hosts had a lot to say about Biden’s fractured foot.

The pangrams from yesterday’s Spelling Bee were outgrowth and wrought. Today’s puzzle is above — or you can play online if you have a Games subscription.

Here’s today’s Mini Crossword, and a clue: Deuces in a deck (four letters).

A clarification: We weren’t clear in yesterday’s email about where a cyberattack shut down remote schooling. It was in Baltimore County (which is outside of the city).

P.S. A hidden haiku in The Times, spotted by the Twitter account @nythaikus: “Schools will reopen/as abruptly as they closed/ — but only for some.”

Today’s episode of “The Daily” is about Biden’s cabinet picks. On the latest “Sway,” Kara Swisher interviews the director and actor Marielle Heller.

Claire Moses, Ian Prasad Philbrick and Sanam Yar contributed to The Morning. You can reach the team at [email protected].

Tags: for, Giving, Ideas, Tuesday
You may also like
Recent News:
This website uses cookies to improve your user experience and to provide you with advertisements that are relevant to your interests. By continuing to browse the site you are agreeing to our use of cookies.Ok