Guido Calabresi, a federal judge and Yale law professor, invented a little fable that he has been telling law students for more than three decades.

He tells the students to imagine a god coming forth to offer society a wondrous invention that would improve everyday life in almost every way. It would allow people to spend more time with friends and family, see new places and do jobs they otherwise could not do. But it would also come with a high cost. In exchange for bestowing this invention on society, the god would choose 1,000 young men and women and strike them dead.

Calabresi then asks: Would you take the deal? Almost invariably, the students say no. The professor then delivers the fable’s lesson: “What’s the difference between this and the automobile?”

In truth, automobiles kill many more than 1,000 young Americans each year; the total U.S. death toll hovers at about 40,000 annually. We accept this toll, almost unthinkingly, because vehicle crashes have always been part of our lives. We can’t fathom a world without them.

It’s a classic example of human irrationality about risk. We often underestimate large, chronic dangers, like car crashes or chemical pollution, and fixate on tiny but salient risks, like plane crashes or shark attacks.

One way for a risk to become salient is for it to be new. That’s a core idea behind Calabresi’s fable. He asks students to consider whether they would accept the cost of vehicle travel if it did not already exist. That they say no underscores the very different ways we treat new risks and enduring ones.

I have been thinking about the fable recently because of Covid-19. Covid certainly presents a salient risk: It’s a global pandemic that has upended daily life for more than a year. It has changed how we live, where we work, even what we wear on our faces. Covid feels ubiquitous.

Fortunately, it is also curable. The vaccines have nearly eliminated death, hospitalization and other serious Covid illness among people who have received shots. The vaccines have also radically reduced the chances that people contract even a mild version of Covid or can pass it on to others.

Yet many vaccinated people continue to obsess over the risks from Covid — because they are so new and salient. 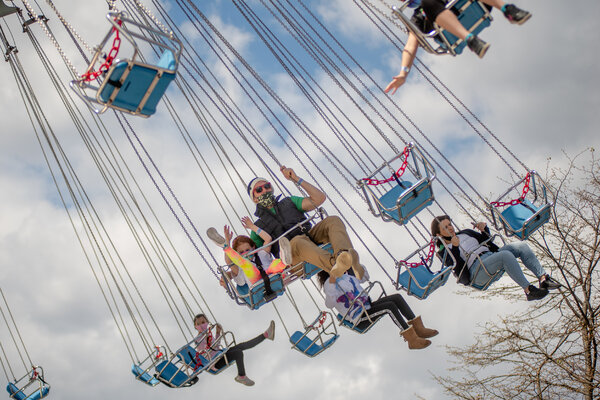 To take just one example, major media outlets trumpeted new government data last week showing that 5,800 fully vaccinated Americans had contracted Covid. That may sound like a big number, but it indicates that a vaccinated person’s chances of getting Covid are about one in 11,000. The chances of a getting a version any worse than a common cold are even more remote.

But they are not zero. And they will not be zero anytime in the foreseeable future. Victory over Covid will not involve its elimination. Victory will instead mean turning it into the sort of danger that plane crashes or shark attacks present — too small to be worth reordering our lives.

That is what the vaccines do. If you’re vaccinated, Covid presents a minuscule risk to you, and you present a minuscule Covid risk to anyone else. A car trip is a bigger threat, to you and others. About 100 Americans are likely to die in car crashes today. The new federal data suggests that either zero or one vaccinated person will die today from Covid.

It’s true that experts believe vaccinated people should still sometimes wear a mask, partly because it’s a modest inconvenience that further reduces a tiny risk — and mostly because it contributes to a culture of mask wearing. It is the decent thing to do when most people still aren’t vaccinated. If you’re vaccinated, a mask is more of a symbol of solidarity than anything else.

Coming to grips with the comforting realities of post-vaccination life is going to take some time for most of us. It’s only natural that so many vaccinated people continue to harbor irrational fears. Yet slowly recognizing that irrationality will be a vital part of overcoming Covid.

“We’re not going to get to a place of zero risk,” Jennifer Nuzzo, a Johns Hopkins epidemiologist, told me during a virtual Times event last week. “I don’t think that’s the right metric for feeling like things are normal.”

After Nuzzo made that point, Dr. Ashish Jha of Brown University told us about his own struggle to return to normal. He has been fully vaccinated for almost two months, he said, and only recently decided to meet a vaccinated friend for a drink, unmasked. “It was hard — psychologically hard — for me,” Jha said.

“There are going to be some challenges to re-acclimating and re-entering,” he added. “But we’ve got to do it.”

And how did it feel in the end, I asked, to get together with his friend?

“It was awesome,” Jha said.

Israel, a leader in vaccination rates, has lifted its outdoor mask mandate. New daily cases are down by 98 percent since January.

More than half of U.S. adults have received at least one vaccine dose.

To understand the risks of boarding a flight, start with how air circulates in a plane.

Counties that voted for Donald Trump have lower vaccination rates, these charts show.

Bhutan is bringing vaccine doses to remote areas of the Himalayas with helicopters and overnight treks.

Policing in the U.S.

Since the killing of George Floyd last May, states have passed more than 140 bills to change policing. Activists are pushing for more.

Closing arguments begin today in the trial of Derek Chauvin. Minneapolis is preparing for post-verdict protests.

Aleksei Navalny’s doctors said that the imprisoned Russian dissident, who is on a hunger strike over his medical treatment, “could die at any moment.”

The leader of Sinn Fein, the Irish political party, apologized for the 1979 assassination of Louis Mountbatten, an uncle of Prince Philip.

Raúl Castro is planning to step down, leaving Cuba without a Castro to lead it for the first time since 1959.

A group of elite soccer clubs — including Barcelona and Manchester United — are planning a breakaway European league.

NASA’s robotic helicopter was scheduled to take a flight on Mars early this morning. The Times will have updates.

The Times’s Maureen Dowd and Thomas Friedman recall visits to the country in columns that help explain Biden’s decision to withdraw all U.S. forces.

But removing troops will not end the fighting — or U.S. involvement — there, Eliot Cohen argues in The Atlantic. “It is not possible simply to walk away from a war one has been committed to and pay no penalty.”

Lives Lived: Joye Hummel wrote the scripts for more than 70 Wonder Woman comic book adventures, but her role went unrecognized for decades. That changed when a 2014 book brought her late-life acclaim. Hummel died at 97.

The many names of New York City

Some experts estimate that New York is home to close to 800 languages, and they are threaded throughout the city’s street names and neighborhoods. There is Manhattan’s Little Brazil, Brooklyn’s Little Haiti, Queens’s Calle Colombia and the Bronx’s Cinco de Mayo Way, which is a tribute to the city of Puebla, the hometown of many Mexican immigrants.

In a new book, “Names of New York,” the geographer Joshua Jelly-Schapiro tells the story of the city’s history through its streets and the names they carry. In some cases, residents — rather than city officials — invented the names: A Yemeni-born supervisor at Kennedy Airport petitioned Google Maps to mark several Bronx blocks as Little Yemen.

“If landscape is history made visible, the names we call its places are the words we use to forge maps of meaning in the city,” Jelly-Schapiro writes. You can read an excerpt in The New York Review of Books, and there is a joint review of the book and a second book — Craig Taylor’s “New Yorkers” — in The Times Book Review.

The flavors are bold and the prep is simple with vegetarian mushroom shawarma pitas.

It’s National Poetry Month. These five poets can help you appreciate the form.

Explore future worlds, get lost in a time loop, go to space: These science fiction movies are worth streaming.

A lot can happen in a 46-second clip.

The pangram from Friday’s Spelling Bee was downhill. Here is today’s puzzle — or you can play online.

P.S. The Times has relaunched its weekly Chinese-language newsletter, written by Rong Xiaoqing. Read the first edition and sign up.

Today’s episode of “The Daily” is about the Iran nuclear deal. The latest Book Review podcast celebrates the show’s 15th anniversary.

Claire Moses, Ian Prasad Philbrick, Tom Wright-Piersanti and Sanam Yar contributed to The Morning. You can reach the team at [email protected].

Tags: Covid, Fears, Irrational
You may also like
Recent News: