The first 100 days of Joe Biden’s presidency were a giddy time for Democrats. After being shut out of the White House for four years — and blocked from enacting their agenda since they lost control of the House of Representatives in 2010 — they came in hot, passing a $1.9 trillion Covid-19 relief bill within weeks of the inauguration. As the clock ticked down to Day 100, Mr. Biden signed a stack of executive orders and, perhaps most important for a country staggering from the winter wave of the pandemic, easily met his promise of administering 200 million vaccine doses nationwide.

What are the president’s supporters feeling now? It’s not giddiness, though the tentative agreement on a framework for infrastructure spending has delivered a shot of optimism for the summer. Still, a framework is not a law; it’s not even a bill. Without the urgency provided by a 100-day window, the whole political process has slowed down.

There’s a clear pattern: The goals Mr. Biden anchored to a specific date — those 200 million shots, Covid-19 relief before supplemental unemployment benefits expired on March 14 — are the ones he has achieved. Others that are to be done merely as soon as possible are languishing. April headlines like “Joe Biden’s First 100 Days Reshaped America” have given way to editorials warning that the president’s legislative agenda has hit a wall.

Perhaps, to keep an infrastructure bill moving along, the president could announce that the second hundred days of his administration are just as important as the first hundred and that he wants to sign a bill before we reach Day 200. Or he could go further and divide his whole term into hundred-day periods. This is no ordinary time — why not a calendar of feast days?

If Mr. Biden could be persuaded to do something like that, he would be drawing on the power of an overlooked tool in our quest to get things done: the deadline.

I’ve spent the past few years studying the effects that deadlines have on productivity by closely observing a variety of organizations racing the clock to get a big project or series of projects done. I’ve talked to engineers at Airbus, Michelin-star chefs and the founders of moonshot start-ups. In each case, one thing was immediately obvious: Deadlines, to paraphrase Samuel Johnson, concentrate the mind wonderfully.

A simple experiment designed by two psychologists, Amos Tversky and Eldar Shafir, demonstrates the point. They offered two groups of students $5 to fill out a long questionnaire. The first group had five days to complete the assignment; the second had no deadline. The results were unambiguous: 60 percent of the students with a deadline returned the questionnaire and got their $5. Only 25 percent of those with no deadline finished the task.

Fine, you might say, but the deadline in that experiment was real. If Mr. Biden were to decide that the infrastructure bill had to be signed by some arbitrary date, no one would take it seriously.

As it turns out, that’s not necessarily true. Experiments have verified that self-imposed deadlines are nearly as effective as mandatory ones. In his book “Predictably Irrational,” the psychologist Dan Ariely recounted assigning his students evenly spaced due dates for each of their papers or letting them pick their own due dates. Some students chose to turn everything in on the last day of class and did poorly, but those who gave themselves evenly spaced deadlines matched the performance of students with mandatory deadlines.

There are also countless external deadlines that Mr. Biden could seize on to attach to his legislative agenda. He could, for example, announce that the infrastructure bill had to pass by Aug. 6, the last day before the Senate’s August recess. And Senate rules have already provided the administration with a natural deadline in the fall: Any changes to the 2021 budget resolution passed by reconciliation, which requires only a simple majority, have to be signed by Sept. 30, the end of the fiscal year.

If Mr. Biden embraced the use of deadlines to jump-start a summer of significant votes, there are ways he could make them especially effective. The first, which seems counterintuitive, is to set the deadline as soon as possible. It was lucky, in a way, that the expiration of supplemental unemployment benefits came on March 14, so soon after Mr. Biden’s inauguration. Congress was forced to act immediately to pass the Covid-19 relief bill, and it couldn’t pretend it had time to waste on fruitless negotiations or bipartisan playacting.

In my research, I found many examples of tighter deadlines working better than long ones. One involved a U.S. census worker who discovered that if you knocked seven days off the window in which people had to reply to the postal census survey, more people turned it in. An ingenious experiment, published by Suzanne Shu and Ayelet Gneezy in the Journal of Marketing Research, tracked what happened when the authors distributed coupons for a free slice of cake at a local pastry shop. One set of coupons expired in three weeks; the others were valid for two months. Although the people who had coupons with a tighter deadline had less than half the time to make it to the pastry shop, they were five times as likely to use them before they expired.

I saw this insight in action when I reported on the 621st Contingency Response Wing, a unit of the Air Force that specializes in disaster response. After a hurricane makes landfall or an earthquake strikes, the 621st is often called up to open up new airfields and distribute supplies. Its goal was to be in the air within a mere 12 hours of getting a call from the Pentagon. The ambition of that tight deadline made the unit’s work possible. It had no choice but to be ready, and so it was.

Mr. Biden could also borrow some tactics from what’s known as goal-setting theory, which holds that you should make your goals concrete and difficult in order to achieve them. It’s an antidote to the vagueness of “as soon as possible” and “do your best,” the attitude that seems to be prevailing among the Democrats today. Legislators should follow the example set out in a classic case study of goal-setting theory, which described the decisions made by a handful of logging companies in Oklahoma. The companies were having trouble getting their drivers to load their trucks to full capacity, which translated into extra trips and extra costs. The company managers first tried to get the truck drivers to do better just by telling them to load more logs — to do their best. No change.

They then tried something different: The drivers were told to load their trucks to 94 percent of their weight limit for every trip. Once the drivers were given that specific and difficult goal, performance improved rapidly. The average load went from approximately 60 percent of capacity to 90 percent, and it stabilized there. The change wound up saving the companies more than a million dollars in total. 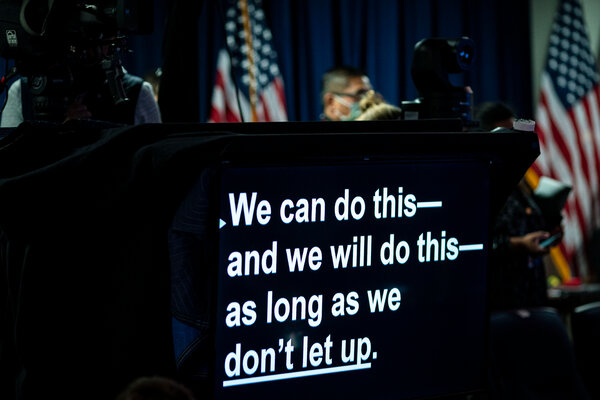 The Biden administration used a similar approach with its vaccination efforts during its first 100 days. You’ll recall that Mr. Biden changed his vaccination goal from 100 million shots to 200 million at the end of March. He took a specific, difficult goal and made it more difficult. We reached 200 million shots with time to spare. If there was a problem with the president’s July 4 deadline to vaccinate 70 percent of American adults, which we narrowly missed, it was probably that it didn’t move fast enough and aim high enough. Audacity — “We choose to go to the moon in this decade” — has a way of generating its own urgency.

During the previous administration, the idea of infrastructure week became a rolling punchline for Donald Trump’s inability to get things done. If Mr. Biden wants to avoid that fate, he needs to unleash a whirlwind of deadlines: a real infrastructure week after Congress returns this month, voting rights legislation passed by Aug. 6, a reconciliation bill covering the administration’s other wish-list items by Sept. 30. Find a date to hang your initiative on and don’t let go.

Mr. Biden has said he wants to emulate President Franklin Roosevelt, the architect of the first first 100 days. In a fireside chat he gave on July 24, 1933, he took credit for what his administration accomplished during the “crowding events of the hundred days which had been devoted to the starting of the wheels of the New Deal.” But he didn’t stop there. The work of the first 100 days was merely the beginning: “We have built a granite foundation in a period of confusion,” he said. There were 4,277 days left in his presidency — 4,277 chances to set a deadline and get things right.

Christopher Cox (@cwhe) is the author of the forthcoming book “The Deadline Effect: How to Work Like It’s the Last Minute — Before the Last Minute,” from which this essay is adapted.

Tags: Joe Bid, Psychology, US Politics
You may also like
Recent News: