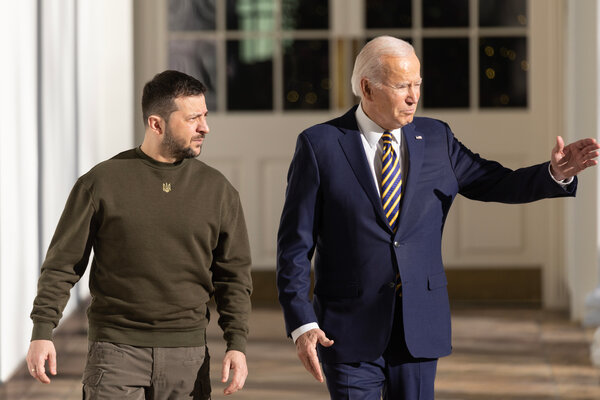 The cameras mostly focused on Volodymyr Zelensky during his address to Congress on Wednesday night, but I focused my attention as much as I could on the audience in the room. There was fervor, admiration, yelling and whooping. In a divided nation, we don’t often get to see the Congress rise up, virtually as one, with ovations, applause, many in blue dresses and yellow ties.

Sure, there were dissenters in the room, but they were not what mattered. Words surged into my consciousness that I haven’t considered for a while — compatriots, comrades, co-believers in a common creed.

Zelensky and his fellow Ukrainians have reminded Americans of the values and causes we used to admire in ourselves — the ardent hunger for freedom, the deep-rooted respect for equality and human dignity, the willingness to fight against brutal authoritarians who would crush the human face under the heel of their muddy boots. It is as if Ukraine and Zelensky have rekindled a forgotten song, and suddenly everybody has remembered how to sing it.

Zelensky was not subtle about making this point. He said that what Ukraine is fighting for today has echoes in what so many Americans fought for over centuries. I thought of John Adams, Frederick Douglass, Theodore Roosevelt, George Marshall, Fannie Lou Hamer, the many unsung heroes of the Cold War. His words reminded us that America supports Ukraine not only out of national interest — to preserve a stable liberal world order — but also to live out a faith that is essential to this country’s being and identity. The thing that really holds America together is this fervent idea.

This liberal ideal has been tarnished over the last six decades. Sometimes America has opposed authoritarianism with rash imprudence — the Bay of Pigs, Vietnam, Iraq. Other times, America has withdrawn behind its ocean barriers and done little while horror unfolded — the genocide in Rwanda, the civil war in Syria, the failure during the Obama and Trump administrations to support Ukraine sufficiently as Putin tested the waters and upped the pressure.

American policy has oscillated between a hubristic interventionism and a callous non-interventionism. “We overdo our foreign crusades, and then we overdo our retrenchments, never pausing in between, where an ordinary country would try to reach a fine balance,” George Packer wrote in The Atlantic recently. The result has been a crisis of national self-doubt: Can the world trust America to do what’s right? Can we believe in ourselves?

Finding the balance between passionate ideals and mundane practicalities has been a persistent American problem. The movie “Lincoln” with Daniel Day-Lewis was about that. Lincoln is zigging and zagging through the swamps of reality, trying to keep his eye on true north, while some tell him he’s going too fast and others scream he’s going too slow.

Joe Biden has struck this balance as well as any president in recent times, perhaps having learned a costly lesson from the heartless way America exited from Afghanistan. He has swung the Western alliance fervently behind Ukraine. But he has done it with prudence and calibration. Ukraine will get this weapons system, but not that one. It can dream of total victory, but it also has to think seriously about negotiations. Biden has shown that America can responsibly lead. He has shown you can have moral clarity without being blinded by it.

Both Zelensky and Biden have been underestimated. Zelensky had been a comedian and so people thought he was a lightweight. He dresses like a regular guy and eschews the trappings of power that obsess people like Vladimir Putin and Donald Trump.

For his part, Biden doesn’t fit the romantic “West Wing” fantasy that many progressives have in their heads. A progressive president should be delivering soaring, off-the cuff speeches that make you feel good about yourself!

But the truth is that both men have delivered again and again. The military struggle in Ukraine might turn grim in the coming months, but both men are partly responsible for a historic shift in the global struggle against brutality and authoritarianism.

A few years ago, democracies seemed to be teetering and authoritarians seemed to be on the march. But since, we’ve had heroic resistance from Kyiv and steady leadership in the White House. As I look at the polls and the midterm results, I see Americans building an anti-Trump majority, which at least right now seems to make it far less likely Trump will ever be president again.

Meanwhile events have shown — yet again — that you can’t run a successful society if you centralize power, censor knowledge and treat your people like slaves. The Times’s awe-inspiring reporting on the Russian war effort shows how pervasive the rot there is. China’s shambolic Covid policies are just one example of the truth that authoritarians can seem impressive for a season, but eventually error, rigidity and failures of human judgment accumulate.

Finally, Zelensky reminded us that while the authoritarians of the world have shown they can amass power, there is something vital they lack: a vision of a society that preserves human dignity, which inspires people to fight and binds people to one another.