You step off the Q train and the Jamaica Bay wind slaps, sending the salt air cutting through your mask to tickle your nose. You know you’re close.

It’s opening day at Coney Island’s Luna Park, the first since the pandemic. It’s April 9 and 55 degrees — at best — but no one cares. This year, no one wants to miss a thing. 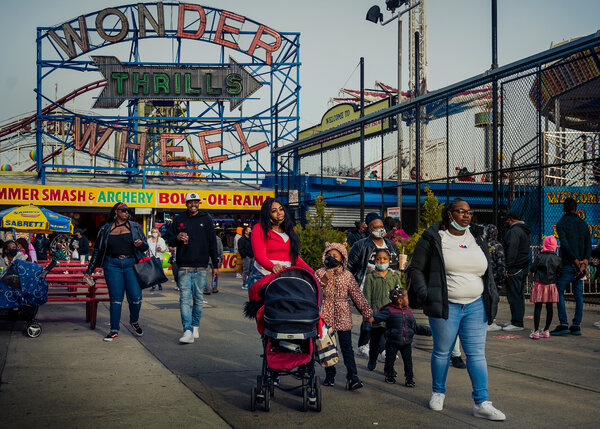 “I’m a New Yorker,” Fanta-Marie Johnson, 28, said as she waited in line to enter. “I’m not going to leave until I touch everything.”

I see the Cyclone first, a ramshackle mess of wooden roller coaster spitting paint chips on the concrete. It groans with every ride, and I wonder how something so battered could be so beautiful.

On the boardwalk, people stroll with surgical masks and hopeful eyes. Teenagers cut virtual school and ride the bumper cars.

Mayoral candidates campaign. Andrew Yang holds a news conference. Kathryn Garcia hops on the Wonder Wheel. Brad Lander, a Brooklyn city councilman running for New York City comptroller, greets voters. Then his teenage daughter, Rosa, talks him into riding the Sling Shot, an attraction that shoots you 150 feet into the air at about 90 miles per hour. “The view really is magical,” Mr. Lander said later. I’ll take his word for it.

Yards away, parents have gotten their small children hot dogs, ice cream and giant stuffed animal trophies they will probably never play with again. Some people just sit quietly drinking beer and staring into the sea.

Suddenly, there are tourists again. One family, from Washington State, won a giant stuffed dog to take home.

Why shouldn’t New York’s recovery begin in Coney Island, a stubbornly shabby bit of old New York wedged between the Atlantic Ocean and the Belt Parkway? It was never going to happen in Times Square.

But after such a lonely year, Coney Island’s frenetic thrill is strangely jarring. I take a break to eat a hot dog, and I decide I’m grateful for the cloudy day. A sunny day would have almost been too overwhelming.

Then I gather my and nerve and take a ride on the Cyclone.

It’s scarier than I remember, but more fun, too. I jump on and let it jolt me forward into a new season, farther and farther from the terrible sirens, and the empty streets, and a winter I once feared would never end.