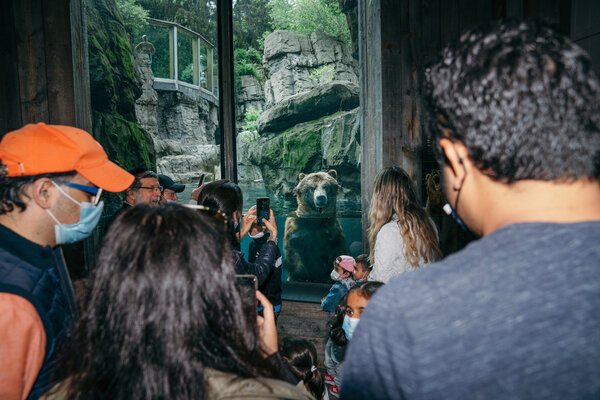 Re “The Case Against Zoos,” by Emma Marris (Sunday Review, June 13):

Ms. Marris argues that leading zoos and aquariums spend an outsized amount on “operations and construction” compared with their expenditures on “conservation projects.”

The reason modern zoos spend so much on operations is simple — effective, science-based zoological institutions focus on the welfare of animals in their care, a moral obligation that does not come cheap. American Humane, the country’s first national humane organization, certifies the humane treatment of animals in more than 60 zoos and aquariums around the globe. These zoological institutions receive our Humane Certified seal as they meet or exceed a science-based set of criteria evaluated by independent auditors who have no stake in the outcome of their decision.

Money spent on proper veterinary care, enrichment activities and nutritious food is not money wasted but rather an investment in the social, and moral, contract we have with animals. To pressure zoos and aquariums to spend less on their animals would lead to inhumane outcomes for the precious creatures in their care.

I am a veterinarian who was a zoo and wildlife park employee for years before obtaining my veterinary degree. Both the wildlife park and zoo claimed to be operating for the benefit of the animals and for conservation purposes. This claim was false. Neither one of them actually participated in any contributions to animal research or conservation. They are profitable institutions whose bottom line is much more important than the condition of the animals.

Animals such as African lions that bred in captivity were “culled” (killed) when their numbers exceeded the financial capability of the zoo to feed them. Baby bears, seals, beavers and other animals were taken in and used by the zoos for financial profit until they were no longer useful, and then either “culled” or released into the wild without the ability to survive. I was taught to recite a spiel on conservation to zoo visitors that was false.

Animals despise being captives in zoos. No matter how you “enhance” enclosures, they do not allow for freedom, a natural diet or adequate exercise. Animals end up stressed and unhealthy or dead.

It’s past time for transparency with these institutions, and it’s past time to eliminate zoos from our culture.

As a zoology professor and, thanks to my kids, a frequent zoo visitor, I agree with Emma Marris that zoo displays can be sad and cruel. But she underestimates the educational value of zoos.

She cites studies showing that most zoo visitors do not closely read educational signs, arguing that few people experience the zoo other than as a simple family outing. However, those few who gain a serious interest in conservation add up to a lot, given that millions of people visit zoos.

The zoology program at my State University of New York campus attracts students for whom zoo visits were the crucial formative experience that led them to major in biological sciences. These are mostly students who had no opportunity as children to travel to wilderness areas, wildlife refuges or national parks. Although good TV shows can help stir children’s interest in conservation, they cannot replace the excitement of a zoo visit as an intense, immersive and interactive experience. They also get to meet adults who have turned their love for animals into a career, and with whom they can identify.

Surely there must be some middle ground that balances zoos’ treatment of animals with their educational potential.

Emma Marris briefly mentions sanctuaries. Sanctuaries are a growing and ethical alternative to animals kept in captivity and “on display.” The Global Federation of Animal Sanctuaries is the accrediting body for sanctuaries, with 200 members in the United States and abroad. One hundred percent of the focus of our organization and its member sanctuaries is on the humane care of their animals.

Unlike zoos, sanctuaries receive no government or municipal funding, rely on small staffs supplemented by volunteers, and operate on shoestring budgets. They also take on the additional cost of providing lifetime care for every animal. They do not buy, sell or trade animals and restrict access to the animals, forgoing the lucrative revenue of general admission and attractions. Instead, they rely primarily on public donations for support.

For wild animals that cannot be returned to their natural habitats, true sanctuaries offer the best alternative. It’s what animals deserve and is the moral choice.

Valerie Taylor
Phoenix
The writer is the executive director of the Global Federation of Animal Sanctuaries.

“The Case Against Zoos” is an insult and a disservice to the thousands of passionate, dedicated people who work tirelessly to improve the lives of animals and protect our planet. Ms. Marris uses outdated research and decades-old examples to undermine the noble mission of organizations committed to connecting children to a world beyond their own.

I’ve specialized in zoo and aquarium marketing as a consultant for 20 years, working directly with animal keepers and their animals to produce commercials that feature everything from sharks to lemurs. I’ve never met more dedicated people in my life. They care for their animals as a parent would care for a child.

Zoos and aquariums are at the forefront of conservation and constantly evolving to improve how they care for animals and protect each species in its natural habitat. Are there tragedies? Of course. But they are the exception, not the norm that Ms. Marris implies. A distressed animal in a zoo will get as good or better treatment than most of us at our local hospital.

The Association of Zoos and Aquariums has been on a continual path of improvement, constantly examining its practices related to animal care and conservation throughout the world.

Most important, Ms. Marris glosses over the true value of zoos and aquariums. When a child looks a gorilla or otter or shark in the eye, something wondrous takes place. A connection is made to a world beyond our own that will live with them forever.

I quite agree with Emma Marris. Having lived in Kenya, driving in the Nairobi National Park early in the morning as the animals were beginning to move around, and experiencing the thrill of a black mane lion lying in the middle of the road as if he owned the kingdom, I do not go to zoos. To see the animals no longer able to roam, pacing in small areas, is too cruel to watch.

As a fellow environmentalist, animal-protection advocate and longtime vegetarian, I could properly be in the same camp as Emma Marris on the issue of zoos. But I believe that well-run zoos, and the heroic animals that suffer their captivity, do serve a higher purpose. Were it not for opportunities to observe these beautiful, wild creatures close to home, many more people would be driven by their fascination to travel to wild areas to seek out, disturb and even hunt them down.

Zoos are, in that sense, akin to natural history and archaeology museums, serving to satisfy our need for contact with these living creatures while leaving the vast majority undisturbed in their natural environments.

Emma Marris selectively describes and misrepresents the findings of our research. Our studies focused on the impact of zoo experiences on how people think about themselves and nature, and the data points extracted from our studies do not, in any way, discount what is learned in a zoo visit.

Zoos are tools for thinking. Our research provides strong support for the value of zoos in connecting people with animals and with nature. Zoos provide a critical voice for conservation and environmental protection. They afford an opportunity for people from all backgrounds to encounter a range of animals, from drone bees to springbok or salmon, to better understand the natural world we live in.

John Fraser
Susan Clayton
Wesley Schultz
Dr. Fraser is the author of “The Social Value of Zoos.” Dr. Clayton and Dr. Schultz are professors of psychology.