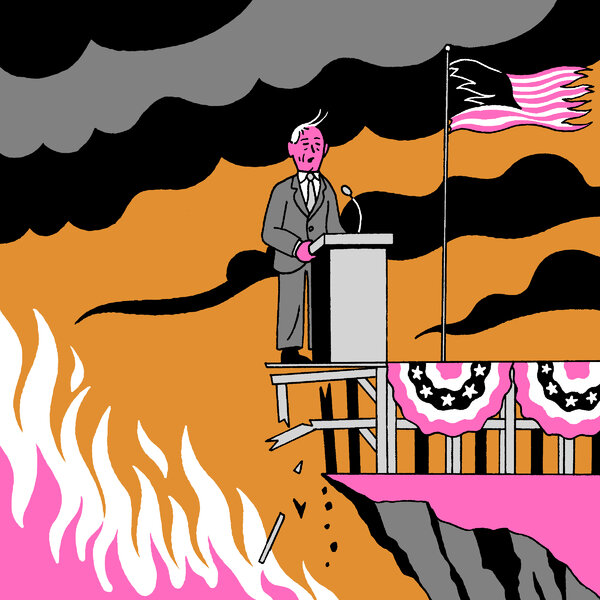 When it comes to abortion rights, the Democrats need to lean into the politics of fear.

They face a base that feels betrayed and a set of wealthy, moderate voters in purple states who may not realize that their own rights are also on the line. Democrats need both of these groups to stave off defeat in the fall, and fear can drive them to the polls. What should the Democrats tell them to be afraid of? A national abortion ban.

America after the fall of Roe v. Wade might feel like we’re living in the worst-case scenario, but anyone who values reproductive freedom has reason to panic about what could happen if Republicans take back power in Washington. G.O.P. Congress members have already introduced bills that would criminalize abortion in various ways. They are only more emboldened now.

Last month, former Vice President Mike Pence called for a national abortion ban. More to the point, Senator Mitch McConnell, the minority leader, has called it “possible.” Recently, he hedged the prediction by stating an obvious fact: “Neither side on this issue has had 60” votes to pass such a ban. Is that a phrase you feel comfortable hanging your future on?

Plenty of progressive voters don’t need to be made aware of the danger. They are already terrified for the future. But everyone should be, not just those who might want or need an abortion in the future. The conservative legal theories (and the conservative jurists) that brought down Roe threaten marriage equality, privacy in the bedroom, even contraception. A law banning abortion by recognizing fetuses as humans with constitutional rights could criminalize in vitro fertilization. The life-or-death pregnancy scenarios now playing out in red states could be repeated right next door, no matter where you live.

To meet the urgency of the moment and save their razor-thin and often nonexistent hold on the Senate, Democrats must talk about that future, giving voters across the country, in every state, a reason to vote. Lives are on the line. At the same time, Democratic leaders have to understand that the politics of fear can run both ways.

The End of Roe v. Wade

Commentary by Times Opinion writers and columnists on the Supreme Court’s decision to end ​​the constitutional right to abortion.

The party needs to scare voters and show that they, too, are scared: scared of the voters themselves. Democratic politicians watched Republicans roll back abortion rights for decades — and when Roe fell, they had no plan. Now, they need to demonstrate that they are willing to put themselves at the mercy of those they failed — making specific promises and letting the voters know that if they fail again, it will be more than a fund-raising opportunity. It will be a reckoning.

Politicians have never shied away from making campaign promises, but the Republicans are better at creating the circumstances for voters to exact revenge. Grover Norquist’s “Taxpayer Protection Pledge” held sway over hundreds of Republican candidates for over a decade. For the G.O.P., the pledge was a neat way to synchronize the interests of the very rich and the defiant antigovernment streak of the white middle class, and the key to making it work, for as long as it has, has been simple: letting voters know they expect to be held accountable. If an elected official bucks the tax pledge, voters have a specific reason to send them home and the politician has no excuses.

A promise to protect abortion rights would not have the same kind of moneyed network behind it that the tax pledge does. But it would carry the same emotional and political weight. In the end, all politicians have to answer for their records.

Say that Democrats committed, for once, to prioritizing action over whatever solution Washington considers reasonable. Call it the Abortion Access Pledge and turn running against the threat of a national abortion ban into a chance to run for something, too.

Don’t quibble, don’t be distracted by debates over whether or when a ban will happen. Instead, decide on a handful of action items around abortion access and get everyone who wants a vote or a dollar to say it out loud: “I will support abortion access in these ways and if I don’t follow through, you should kick me out.”

I am honestly unsure if it matters what those action items are; I do know Democrats will have to throw out any concern for the appearance of moderation. Right now, all the ideas about bridging the gap to abortion access sound extreme. But so did the tax pledge at one point. So did overturning Roe v. Wade.

Take allowing abortions on federal land. Biden could declare the policy so. Candidates would only have to pledge to support it. Yes, the policy would invoke an avalanche of untested legal theories and complicated jurisdictional questions. But Democrats who want to save the lives of those in need of an abortion can’t fall back on “it’s complicated” as an excuse to not even try.

If you want something less complicated — something that would also help roll out abortions on federal lands — make a pledge not to vote for any appropriation bill that carries the Hyde Amendment, which bans federal funding for most abortions. On its own, abolishing the Hyde Amendment would not greatly expand access outside states where abortion is legal. But combined with abortion access on federal property, the government could act even more directly to help those seeking abortion care. Stonewalling Hyde-burdened budgets could lead to a government shutdown, but if you think that ruins a party’s reputation forever, well, you are probably a current Democratic office holder.

Embracing a politics of fear on reproductive rights unites two of the constituencies the Democrats need to edge out the G.O.P. in key narrow races (Wisconsin, Pennsylvania, Georgia). First, hammering home the danger of a national ban may sufficiently alarm moderate voters in the suburbs, convincing them to abandon Republicans. Second, addressing the widespread sense of betrayal among progressive voters will help keep them activated. The threat of a national abortion ban is also a national message. Democrats can make it clear that the party can’t risk a single loss, no matter how lopsided the polls are. And then there is the simple truth underpinning this entire strategy: Protecting abortion rights is popular.

This plan — where Democratic leaders take real political risks — is untried. But it’s worth the gamble. Bold action is the only way to assure voters that they are prepared to do whatever it takes when other rights are on the chopping block. Most significantly, prioritizing responsiveness to voters would reset the entire framework of Democratic campaigns.

The only way this strategy could truly backfire is if Democrats run on a promise and then break it, again. And expect to be re-elected, again. Of course, that is what Democrats are doing right now. “Protect Roe” was their rallying cry; it turns out that’s all it was.

Fear often divides, but it can also unite. When you have a common threat, there is an opportunity for a common mission. This threat is no longer beyond the horizon — it’s at the door. Now, Democrats, decide on a mission.

Ana Marie Cox (@anamariecox) was the founding editor of the political blog Wonkette. She is the author of “Dog Days,” a novel, and a forthcoming memoir.