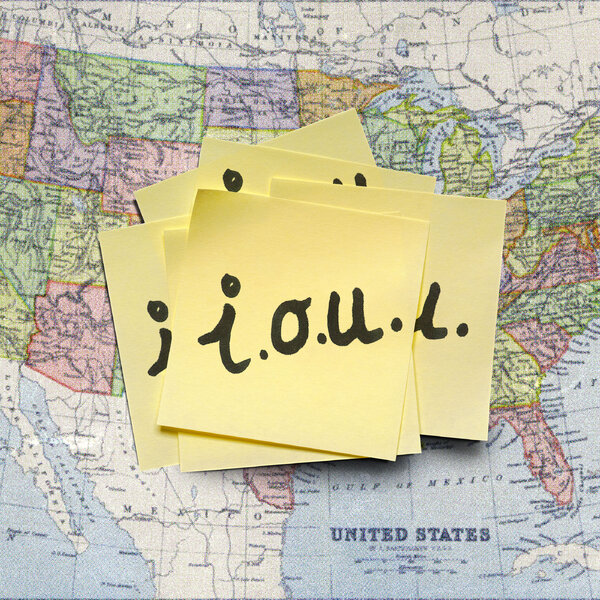 The U.S. federal government last ran a budget surplus in the fiscal year 2001. (Fiscal years begin in October of the previous calendar year. Don’t ask.) Since then, the government has borrowed roughly $20 trillion. That’s a large number, even for an economy as big as America’s: Federal debt held by the public has roughly tripled as a percentage of gross domestic product, from 32 percent to 94 percent.

I argued in my last column that, despite all this borrowing, we are not in any kind of debt crisis. Historically, in fact, U.S. debt isn’t all that unusual. For example, over the past three centuries Britain emerged from each major war with debt as a percentage of G.D.P. well above the current U.S. level, and took many decades to bring that debt ratio back down:

Still, the political history of America’s 21st-century deficits isn’t edifying. George W. Bush squandered that 2001 surplus he inherited largely on tax cuts that favored the wealthy and the invasion of Iraq, both sold to the public on false pretenses. Donald Trump rammed through another big tax cut tilted toward the wealthy, again with false claims that it would do wonders for the economy.

Democrats haven’t done anything comparably egregious — sorry, I’m not going to “both sides” this — but Joe Biden’s two-trillion-dollar American Rescue Plan looks excessive in retrospect, and helped feed a burst of inflation that seems to be subsiding but caused considerable grief.

But however much one may criticize the fiscal decisions that brought us to this point, it’s important to remember that it’s not quite the same thing as saying that we should have borrowed much less money than we did. It’s certainly possible to imagine alternative histories that would have left us with much less debt. But in many cases fiscal austerity would have had created problems of its own, and the costs of not having a lot of debt would probably have been high.

Let’s think about when and how most of the debt was incurred. It’s important to scale debt to the size of the economy. My preferred measure — because it avoids some distortions associated with recessions — is debt as a percentage of potential G.D.P., an estimate of what the economy could produce at full employment. Here’s what it looks like over time (I’ll explain the interest rate line in a minute):

What you can see is that while all that profligate tax cutting certainly didn’t help, most of the debt was incurred during two episodes: the 2007-09 Great Recession and its aftermath, and the Covid-19 pandemic.

In the case of the recession, the deficit shot up largely because tax receipts plunged along with the economy, while social safety net spending, especially unemployment benefits, soared. President Barack Obama’s stimulus package was also a factor, but it was only part of the story.

This deficit surge was actually a good thing at the time: It helped sustain spending, which in turn propped up the economy, and this was arguably a major reason we didn’t experience a full replay of the Great Depression. Indeed, as some of us argued desperately at the time, the stimulus was much too small and faded out much too soon.

But should there have been a bigger effort to balance the budget once the crisis was past? The problem is that recovery from the Great Recession was slow. It took roughly eight years for unemployment to fall back to its pre-crisis level:

And cutting spending or raising taxes to limit debt would have made that recovery even slower. Normally, the Federal Reserve can offset the depressing effects of fiscal contraction by cutting interest rates — but after the Great Recession it didn’t have that option, because it had already done almost all it could, cutting the interest rates it controlled to close to zero.

So the big rise in debt between 2007 and the late 2010s was actually justified by economic events, and any attempt to avoid that rise would have done more harm than good by slowing our recovery even further.

Then came Covid, and this time the government responded very strongly, with trillions in aid to families, businesses, the unemployed and state and local governments. The result was a gratifyingly fast economic recovery — again, accompanied by a burst of inflation, but that seems to be subsiding. Of course, there was also an upward jump in debt.

So should we start trying to pay this debt down now? Leave aside the fact that, politically, it just isn’t going to happen, would it even be a good idea economically?

The answer depends in large part on whether the Fed would be able to offset the depressing effects of fiscal austerity on demand. Right now that wouldn’t be a problem, since the Fed is raising rates to fight inflation; all it would need to do is slow or reverse these rate hikes. But what will the economic environment look like in, say, two or three years?

Well, my view is that we’ll probably be headed back to an era of low interest rates. Markets also expect the Fed to unwind many of its recent rate hikes, although not all of them. This could all be wrong, but if we find ourselves back in a low-interest-rate world, that will also be a world in which trying to reduce the debt would cause a lot of economic problems at a time when the Fed lacked its best tool for dealing with them.

So, did we borrow too much money? Probably not. During those two economic crises of Covid and the Great Recession, adding to the debt was more than justified. I just wish some of the other borrowing had been used for better purposes: ending child poverty rather than giving tax breaks to corporations, rebuilding infrastructure rather than invading Iraq. But while our priorities were sometimes foolish, our borrowing wasn’t.

When Alan Greenspan supported tax cuts because we were paying debt down too fast.

The Trump tax cut was a bust.

The case for persistent fiscal deficits.

“The national debt is a very Good Thing and it would be dangerous to pay it off, for fear of Political Economy.”

Boygenius is back together! From the group’s previous venture.