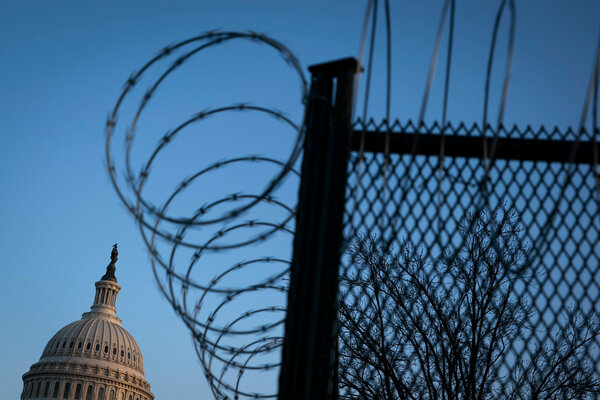 Leadership in the House of Representatives closed the chamber to legislative work on Thursday, out of concern that some of the violent insurrectionists who stormed the Capitol in January would choose this day to once again endanger members of Congress, attack police officers and vandalize the building which symbolizes our democracy. It was an understandable decision, given the genuine threat of harm members of Congress were subject to just two months ago, the continued instigation of violence by the former president and the still unresolved accountability for preparedness and security failures that occurred. Still, it was the wrong choice.

What we have learned from two decades of focus on both domestic and international terrorism is that demonstrating resilience in the face of threats is the best response. It puts the threat in proper context — by demonstrating both that it is marginal, relative to the importance of legislative work, and by also conveying confidence that the Capitol Police, the District of Columbia Police, the local National Guard and the F.B.I. have the ability to easily handle the problem. It shows how little power insurrectionists have, and how well-equipped our security services are for dealing with them.

And they actually are equipped to handle these threats, despite the failures on Jan. 6. Security fencing remains around the Capitol, security services are on alert and more than 5,000 National Guard troops will remain on site after mid-March (some 7000 remain to date). The date of possible violence has been known for some time, and preparations have been made. The F.B.I. investigations, visitations and arrests of insurrectionists are also likely deterrents for prospective violent actors. In other words: Security measures already in place ought to be sufficient to prevent another event like Jan. 6.

The immediate concern this week was a lunacy: a belief driving insurrectionists to anticipate former President Donald Trump somehow regaining power on March 4. In a statement put out on Wednesday, the U.S. Capitol Police said, “We have obtained intelligence that shows a possible plot to breach the Capitol by an identified militia group on Thursday, March 4.”

Politico reported that “both federal authorities and the sergeant-at-arms warned of discussions by ‘militia violent extremists’ to seize control of the complex on or around March 4.”

The “on or around” is significant — the vagueness of the timing suggests a persistent threat, not one going away after March 4. That means closing the Capitol today doesn’t stanch this threat. Similar warnings are also being issued for the State of the Union address; are we going to cancel that, as well?

But generals are often accused of fighting the last war, and that’s what it looks like the House leadership has done by pre-emptively closing the chamber. So fearful are they of a reprise of the shocking violence of Jan. 6 that they didn’t want to risk another damaging blow to our civic peace. Especially not while hearings are still revealing the extent of anticipation, miscommunication, avoidance of responsibility and failed execution among our police and military on Jan. 6, which was, arguably, itself an overreaction to the inversely enormously visible role of our military during the Black Lives Matter protests last summer.

House leaders were probably also concerned about being accused of not doing everything in their power to protect members of Congress. It is a common political reaction: overreacting to threats in order to avoid criticism of being soft. In fact, that is the tragic story of post-9/11 American foreign policy: We allowed Al Qaeda to succeed in diverting a superpower from the set of priorities President George W. Bush was elected on in 2000 by overcompensating for the threat terrorism posed.

Congressional leaders made the right decision on Jan. 6, which was to reconvene and certify the election. It was a moment of pride and resilience that demonstrated insurrection would not prevent Congress from fulfilling its constitutional prerogatives. By contrast, the excess of caution evinced by the House leadership this week conveys the wrong message to the country. It sends a terrible signal that, by threatening violence, insurrectionists can divert Congress from its proper legislative business at any time of their choosing.