Our Opinion writers have offered their takes on who won last night’s debate, the only chance for Senator Kamala Harris and Vice President Mike Pence to come face to face, albeit through plexiglass, as we approach the climax of the election.

As the nominees and Mr. Pence’s pesky fan left the stage, we turned to our readers to find out what you thought. Among thousands of responses, many noted a dramatic increase in both substance and etiquette compared with last month’s presidential debate:

“I’m giving it to Senator Harris for delivering the consistent and truthful hammering of the Trump administration that Biden failed to achieve in the previous debate,” wrote Alan Zhou in Boston.

“For Pence, the pivotal moment was the conclusion of his first response, when everyone could emit a sigh of relief knowing that he wouldn’t echo last week’s performance by Trump,” wrote Dave Stauffer in Red Lodge, Mont.

As Jay Orchard in Miami Beach, Fla., put it: “Never has something so boring been so appreciated.”

More thoughts from our readers follow. They have been edited for length and clarity.

Who won and why 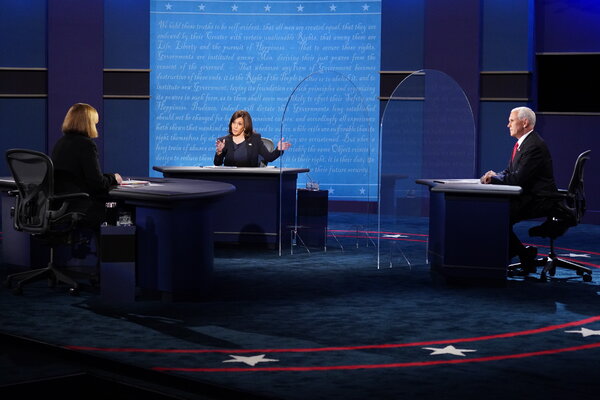 R. Hassan, Geneva: Mike Pence was the more effective speaker. He made the best use of his time and was skilled at cutting into Kamala Harris’s time in a way that did not appear aggressive. He manipulated facts in a suave manner and managed to attack Kamala’s record in convincing ways.

Elizabeth Quinn, Los Angeles: Kamala Harris, hands down. She was clear on policy, she engaged with the viewing audience and she held her own against a slew of lies and interruptions. As a woman, I know that fine line we have to walk between being assertive and showing leadership without coming across as hostile and overly emotional. She never missed a beat.

James Evans, San Antonio: Pence won because he was more forthright, sincere. Does that mean I will change who I’m voting for? Maybe not. But Pence clearly had Harris against the ropes on packing the Supreme Court.

Adams Wofford, Chapel Hill, N.C.: Harris was impressive. She was like Wonder Woman debating Plastic Man. She gave generally truthful answers and seemed to possess a fund of knowledge.

Chris Masterson, San Francisco: It’s hard to pick a winner when the country is so divided. I think Pence spoke directly to the fears of older, whiter Americans and I’m sure a lot of what he said resonated. Overall, however, Harris was the stronger debater.

Pippa Norris, Cape Cod, Mass.: Senator Kamala Harris is a clear winner: Avoided clichés. Showed empathy. Hit the detailed policy marks. Didn’t interrupt Pence but didn’t back down either. An intelligent woman. Looks like a future President Harris to me.

Steven Reznick, Boca Raton, Fla.: Harris elaborated on the Trump-Pence policy failures effectively and illustrated the devastating consequences to working-class America. Pence presented a civil conservative rebuttal. The American people won this debate by demanding — and getting — a civil discourse to digest.

Gail Atwater, Dallas: When Harris said the Trump administration’s mishandling of Covid was the greatest failure of any administration. And there she was saying it to the head of the Covid task force behind plexiglass.

Syd Logan, San Diego: Pence’s response to the eighth grader. It was full of hope and showed me his humanity. Harris missed an opportunity here; I wanted her to respond to Pence with thanks for such empathy. It would have shown me she could find common ground with the other party.

Sara Arevalo, Katy, Texas: When V.P. Pence asked Senator Harris to stop politicizing American lives after she tried to minimize the possibility of getting a vaccine during the Trump administration.

Lorena Mesa, Chicago: When Kamala raised that Trump refused to condemn white supremacy, it highlighted that systemic racism is real and that Breonna Taylor and George Floyd were murdered because of it. And all the while she stayed calm while Pence lectured her about racism.

Bill Swendson, Pewaukee, Wis.: For many, the most pivotal point may be when Harris said if you have a pre-existing condition, “they are coming for you.” But for me, it was Harris citing the Pew survey finding that our allies think more of the Chinese leader than Trump. It bothers me that we have lost our standing in the world and our ability to shape world actions.

Mary Sojourner, Flagstaff, Ariz.: I loved how Kamala calmly pointed out that she was speaking. Yes, sister.

Something small but revealing …

Hunter McIntyre, Utah: Harris appeared to receive poor debate advice on fracking. Just take a stance. Fulminating against it publicly in the past and now promoting it to help win over Pennsylvania just comes across as insincere waffling. You just lose us environmentalists.

Jo Dexter, Middlebury, Conn.: How weird that Pence was actually trying to trick viewers into thinking he acknowledged climate change by putting the phrase “the climate is changing” in proximity to the word “science.” What a painstaking pretense to appear rational while maintaining an irresponsibly irrational position on this crucial issue.

Ellie Mead, Oakland, Calif.: Kamala kept bringing it back to Joe, and whenever she brought him up it was with affection, loyalty and respect. Pence, on the other hand, mostly brought up Trump in the context of defending him, and the way he spoke of Trump was almost offhand and lacking genuine connection.

Radhika Bora, New York, N.Y.: I found it telling that Kamala had clearly prepared to confront Pence’s hypocrisy on the nomination of Amy Coney Barrett with such a powerful historical example. Holding up Lincoln as a model for Trump was apt and moving.

Jeffry Kravat, Indian Land, S.C.: Neither of them was willing to answer the question about taking over for an old president. I think Pence was afraid to offend Trump while Harris did not want to make the election about her rather than Biden.

Martin O., Sioux Falls, S.D.: Both candidates were unflappable, but Pence gets an extra point for ignoring the fly on his head.

Tags: 2020 election, Pres, US Politics
You may also like
Recent News:
This website uses cookies to improve your user experience and to provide you with advertisements that are relevant to your interests. By continuing to browse the site you are agreeing to our use of cookies.Ok