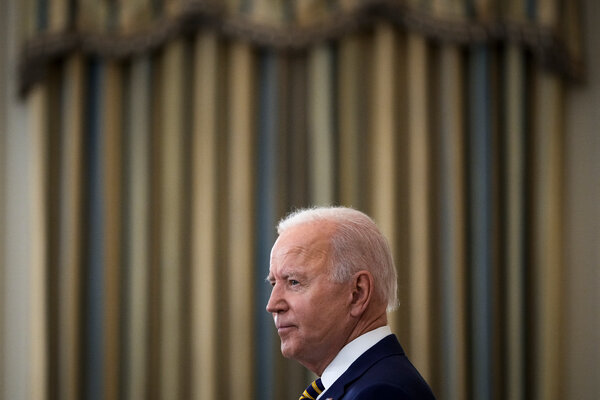 Ms. Collins and Mr. Stephens are opinion columnists. They converse every week.

Gail Collins: Bret, it’s been a while between conversations and although I’ve been on vacation I have noticed a lot of … stuff. Particularly the frozen Senate. Tell me, who’s your hero? Action-stopping Joe Manchin? Perpetually plotting Mitch McConnell? Let’s-all-get-along Mitt Romney?

Bret Stephens: Welcome back from holiday, Gail. Years ago I won a minor journalism award on the strength of my mockery of Mitt Romney’s presidential bid. But how can you not love a Republican who voted to convict Donald Trump of high crimes and misdemeanors not once, but twice?

Gail: Yeah, I’ve certainly gotten over that dog on the roof of his car.

Bret: That said, my hero of the hour is the gentleman from West Virginia. Everybody hates the filibuster until they find themselves in the minority, and Manchin is doing his fellow Democrats a favor, which they can thank him for when they lose the majority. I really don’t understand how some liberals attack the filibuster as some kind of emblem of white supremacy when both Barack Obama and Joe Biden were defending its sanctity during a period of Republican control of the Senate. Come to think of it, as Democratic senators past and present go, I think I like Manchin almost as much as I like the other Joe — Lieberman, that is.

But how about you? Who is your senator of the hour?

Gail: Oh gosh, I’m fascinated by the Lieberman-Manchin coupling. I think you’re the first one who’s suggested to me it might be a … welcome development. We’ve divided on the Lieberman issue before. I’ve blamed him for everything from Al Gore’s loss of the presidency to the flaws in Obamacare, but I won’t torture you on that front today.

Bret: Shouldn’t you blame, um, Ralph Nader, or Antonin Scalia, or those earth-tone suits for Gore’s loss? Sorry, go on.

Gail: There are two reasons Manchin keeps holding up the Biden agenda. One is that he’s from a very Republican state and has to keep reminding his voters he isn’t like those other Democrats. Perfectly understandable, but not exactly heroic.

Bret: Well, you can have a conservative Democrat from West Virginia who votes with his party roughly 62 percent of the time. Or you can have a Trumpist Republican who votes with her party 100 percent of the time. I think liberals should give their red state Democrats a little more respect lest they be tempted to defect like Colorado’s Ben Campbell, Alabama’s Richard Shelby and Texas’ Phil Gramm.

Gail: Manchin also just seems like he thinks it’s cool to be the one guy who can stop every bill in its tracks. But in this kind of situation, being the big “no” vote isn’t heroic, it’s posturing.

As to my senator of the hour, don’t know if I have a good nominee, but I am very, very tempted to drive you crazy and say Chuck Schumer.

Bret: Ideological differences aside, I genuinely like the senator and his wonderful wife Iris. So I’ll refrain from suggesting that the Senate majority leader would ever stoop to any political posturing of his own. What is it that you’re liking about him so much lately?

Tags: 2020 election, Abor, US Politics
You may also like
Recent News: