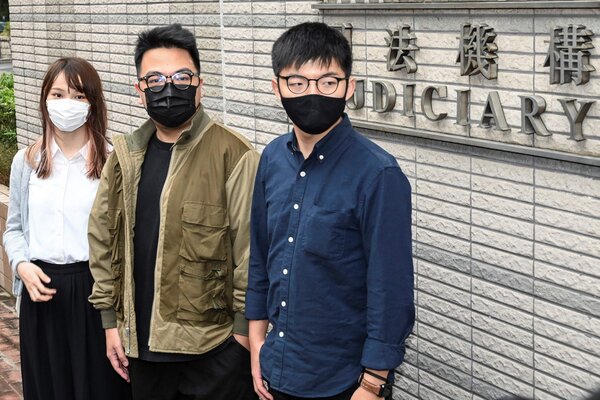 Joshua Wong and Agnes Chow, two icons of Hong Kong’s pro-democracy movement, are going to prison. On Wednesday, Joshua was sentenced to 13.5 months, Agnes to 10 months and a third defendant, Ivan Lam, to seven months, for inciting, organizing or participating in an unlawful assembly at Hong Kong Police Headquarters in June 2019. (They had pleaded guilty.) But they might not get out for quite a bit longer than that: The Chinese government, acting through the Hong Kong authorities, has already pressed more charges. And its point, after all, is to stamp out dissent in Hong Kong.

These charges were brought under the Public Order Ordinance, but since June 30 there is also the much more severe national security law. Twelve people who were caught at sea trying to flee Hong Kong in August have been in detention on the mainland since, reportedly with no access to lawyers.

Activists like us — the authors, who are in exile and wanted for arrest or in the diaspora, and our comrades in Hong Kong who face imprisonment or persecution — will continue to campaign relentlessly against China’s authoritarian expansion and try to safeguard what is left of Hong Kong’s liberal institutions, for as long as we can. But we need the support of governments, businesses, universities, labor rights organizations and NGOs everywhere.

If the world does not act resolutely to build a stronger alliance against the Chinese Communist Party’s increasing aggression, more activists will be sacrificed, and more essential democratic values, too. Hong Kong is at the front lines of the resistance against Beijing’s authoritarianism; what happens there should matter to anyone anywhere who cares about the future of freedom, especially since Beijing is trying to export its high-tech, repressive ways to the world.

The incoming Biden administration must not only remain critical of the C.C.P. regime but also have the courage to foster a new China policy that prioritizes human rights over other interests. Only then will the United States be able to restore its leadership in a global order committed to freedom, democracy, equality and multilateralism.

In June 2019, before Joseph R. Biden Jr. had secured the Democratic Party’s nomination as its presidential candidate, he tweeted: “The extraordinary bravery shown by hundreds of thousands in Hong Kong, marching for the civil liberties & autonomy promised by China is inspiring. And the world is watching. All of us must stand in support of democratic principles and freedom.” Now that Mr. Biden is president-elect of the United States, we call on him to make good on that sentiment.

The C.C.P. government has increasingly been imposing mainland-style authoritarian governance on Hong Kong, in the process scrapping its engagement to Britain under the 1984 Sino-British Joint Declaration and sabotaging the “one country, two systems” principle of governance for Hong Kong, two commitments Beijing undertook that were supposed to ensure a high degree of autonomy for the city until 2047.

This summer, the C.C.P. imposed a far-reaching and extremely punitive national security law on the city. That law has since been invoked to arrest protesters, expel even moderate pro-democracy lawmakers from the Legislative Council and discipline teachers deemed to be insufficiently patriotic toward the mainland.

Next in line may be the city’s judges, district councilors, civil servants and even school children. Carrie Lam, Hong Kong’s chief executive, delivered her annual policy address — the equivalent of the U.S. president’s State of the Union speech — last week and said, among other things, that “positive values” needed to be fostered among students, including “a sense of identity, belonging and responsibility toward the nation, the Chinese race and our society.”

Thanks to years of unfair trade practices, the C.C.P. has been able to concentrate wealth and power. More recently, the Chinese government has managed to consolidate its grip by capitalizing on the Covid-19 pandemic: extending the digital surveillance of its citizens in the name of combating the virus or, while other governments struggle with health crises at home, clamping down on the Hong Kong democracy movement and asserting its presence in the South China Sea. This, even though by all serious accounts, the new coronavirus first appeared in China, and more and more reports and investigations — including a recent CNN analysis of leaked documents from Hubei Province — show that the Chinese authorities covered up news of the initial outbreak.

In the past few years, the Trump administration took various measures to condemn the repression in Hong Kong. It terminated the city’s special trade status; it imposed sanctions on C.C.P. and Hong Kong officials for cracking down on protesters. (Mrs. Lam recently said that she was receiving her government salary in cash, and had “piles” of it at home, because no bank would give her an account anymore.)

Other world leaders, various labor rights organizations and businesses have also begun to re-evaluate their misguided arrangements with China. Many have come to ask whether the allure of short-term financial gains should overshadow the prospect of other kinds of long-term losses.

Imposing tariffs on Chinese imports, blacklisting C.C.P.-sponsored companies, investigating C.C.P.-funding at American universities and the activities of the party’s so-called united front, its worldwide network of influence — all these moves serve the valuable purpose of signaling to China’s leadership that it is violating global rules and that that won’t be tolerated.

Yet so far these efforts have not secured any substantial reform from the C.C.P.

We hope that the Biden administration will review and reform asylum policies for Hong Kongers and take a close look at sanctions against those who attack the city’s democratic institutions. Critical decisions also need to be made by the new administration about the protection of minorities in Xinjiang and Tibet and strengthening diplomatic ties with Taiwan.

Washington must craft a China policy that puts human rights front and center, but without neglecting the urgent need, too, for environmental protection, greater respect for labor rights and fair trade. That would continue to signal strong support not only for human rights activists or proponents of democracy in Hong Kong, but for all people who want to be free.

Nathan Law Kwun Chung (@nathanlawkc) is a pro-democracy activist from Hong Kong. Alex Chow (@alexchow18), a Ph.D. student at the University of California-Berkeley, is a Hong Kong activist.