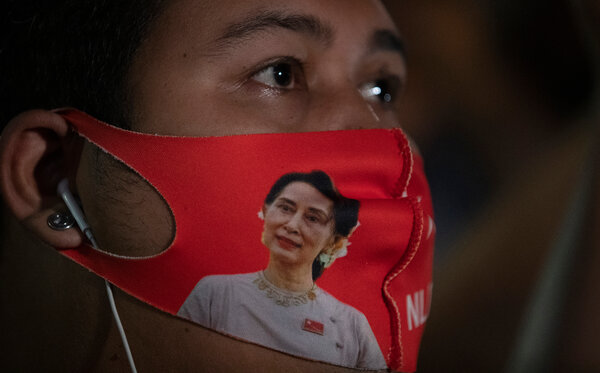 Myanmar needs a fresh path to democracy. Free and fair elections (and respect for the results) are essential. But also essential is the transformation of a society shaped by decades of dictatorship, international isolation, brutal armed conflict, racial and religious discrimination, extreme poverty and widening inequality. A narrow focus on political change will mean only the continued military domination of this country of 54 million people.

Since the military coup on Monday, dozens of prominent political figures — including Daw Aung San Suu Kyi — have been detained, and a new administration under the army commander in chief is now in charge. Protests in the largest city, Yangon, and elsewhere are beginning to gain ground and may soon lead to violent repression.

To understand why this is happening we have to look back. Politics in Myanmar over the past 30 years has been a contest between the army and Ms. Aung San Suu Kyi’s party, the National League for Democracy. In 2010, from a position of strength, the army introduced a new constitution, one that would entrench its pre-eminent position while at the same time ceding considerable authority over day-to-day governing to an elected president and parliament. Army leaders thought the system would contain Ms. Aung San Suu Kyi, but they underestimated her enormous popularity among ordinary people.

The past five years have been an uneasy cohabitation. Ms. Aung San Suu Kyi and the generals share similar conservative and ethnonationalist beliefs. But Ms. Aung San Suu Kyi centralized power and pushed for constitutional change that would place the army under the authority of an elected government. To the army this was anathema.

It’s not clear what comes next. The army says it will hold new elections within a year. But new elections, even with the army’s guaranteed 25 percent of seats in Parliament, will almost certainly lead to yet another victory for Ms. Aung San Suu Kyi’s party. The key then for the army may be to find some way to sideline her. But this will hardly be acceptable to her millions of supporters. Either way, the political stalemate will only continue.

And Myanmar cannot afford a political stalemate. There has been no improvement in the plight of Rohingya Muslim refugees in Bangladesh since their violent expulsion from Myanmar in 2016 and 2017, no accountability for the violence against them and no letup in the discrimination faced by those Rohingya people left in the country.

In the same part of the Myanmar, fighting over the past two years between government forces and a new insurgency, the Arakan Army (affiliated with the local Buddhist Rakhine minority), has displaced tens of thousands of civilians. In the eastern uplands, especially near the border with China, there is a patchwork of dozens of nonstate armed groups (the largest having over 25,000 well-armed troops) and militia, some defending ethnic minority communities, others intimately tied to an international methamphetamine industry worth over $60 billion a year. Cease-fires are tenuous at best.

Myanmar is also one of the poorest and most unequal countries in Asia, with an economy almost entirely dependent on the export of primary commodities and unskilled labor. Climate change has already led to the migration of millions. And while Ms. Aung San Suu Kyi’s government had done a reasonably good job of handling the coronavirus pandemic, the economic impact of Covid-19 has been catastrophic. According to one survey taken last year, the percentage of the population making less than $1.90 a day rose from 16 percent in January 2020 to 63 percent in September 2020, with more than a third reporting no income that month.

Violent conflict and economic inequality mean that tens of millions in Myanmar live the most precarious of lives. What’s allowed a degree of political freedom coupled with some economic growth over these past 10 years has been the compact between the army and Ms. Aung San Suu Kyi to try to work together. That’s most likely finished forever.

Political detainees should be released and basic human rights respected. It’s correct for foreign governments to stand against a new dictatorship in Myanmar, but they should avoid sanctions that could tip the country over the edge into economic collapse.

What’s important, too, at this moment of crisis is to recognize the depth of Myanmar’s challenges and to understand that progress toward democracy is impossible without progress on a range of fronts, from racial discrimination and violent conflict to inequality and underdevelopment. The outside world can help by ensuring that ordinary people’s lives and livelihoods are protected, and by encouraging this broader focus on the need for social and economic as well as political change.

A desperately poor and unequal country at war with itself won’t produce anything other than a facade of democracy. The aim should be not the hybrid constitution of the past decade but a fairer and more democratic society for all of Myanmar’s people.

Thant Myint-U (@thantmyintu), a historian, is the author of “The Hidden History of Burma: Race, Capitalism, and the Crisis of Democracy in the 21st Century.”