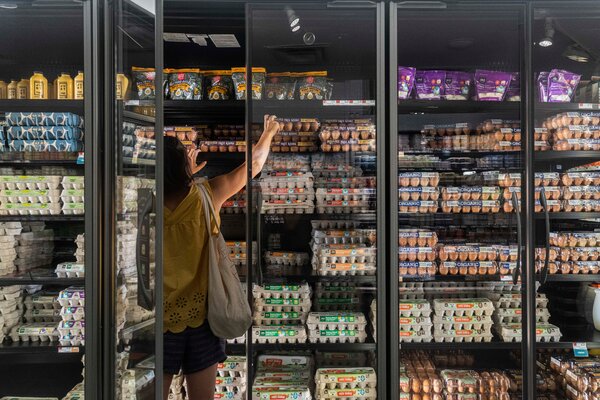 Few things I’ve written in recent years have generated as much hate mail as a relatively low-key, somewhat nerdy newsletter I put out just before the release of data on gross domestic product for the second quarter of 2022. In that newsletter I explained why, despite a lot of misinformation in the news media, a recession is not defined as two quarters of declining G.D.P. and the first half of 2022 was unlikely to meet the actual, multidimensional criteria used by the committee that determines (after the fact) whether a recession has started.

The reason for the hate mail was, of course, that Republicans were eager to declare a “Biden recession” and falsely accused the administration of a double standard when it said that we were not, in fact, in a recession.

Well, Thursday’s advance G.D.P. report for the third quarter of 2022 showed why a recession call based on two quarters of somewhat bizarre data would have been all wrong. Economic growth has rebounded, back up to 2.6 percent at an annual rate — putting G.D.P. back in line with strong employment growth, which has continued throughout the year. Do you really want to say that we were in a recession from January through June but have miraculously recovered?

I’ll write more about the quirkiness of recent economic numbers, including the strange disconnect between jobs and G.D.P., soon. For now, suffice it to say, we weren’t in a recession earlier this year and aren’t in a recession now, although we could find ourselves in one in the future as delayed effects of rising interest rates kick in.

Politically, however, it may not matter much, because Republicans have largely given up on the recession story. Instead, their economic attacks, in both debates and campaign ads, have been focused overwhelmingly on inflation, especially gas prices.

It therefore seems worth pointing out that the G.O.P. doesn’t have a plan to fight inflation. Actually, it doesn’t have any coherent economic plan at all. But to the extent that Republicans have laid out what they will try to do if they win the midterms, their policies would make inflation worse, not better.

When pressed about how, exactly, they would reduce inflation, Republicans often fall back on some version of “Gas was only $2 a gallon when Trump left office!” So let’s talk about that comparison.

First, it’s remarkable how the right has reimagined January 2021 as a golden moment for America. At the time, about 20,000 Americans were dying from Covid every week; there were still nine million fewer jobs than there had been before the pandemic. Indeed, the still-depressed state of major economies, including that of the United States, was the main reason world oil prices were unusually low, which in turn was the main reason gas was cheap.

A better comparison would be with 2019, the year before the pandemic, when gas averaged $2.60 a gallon. Bear in mind that average wages have risen about 15 percent over the past three years, so gas would be as affordable now as it was in 2019 if its current average price were $2.99. As of Wednesday, it was $3.75. So yes, gas has become less affordable, but not by nearly as much as Republicans claim.

And despite G.O.P. rhetoric, Biden administration policies have had little impact on gas prices, which have been driven by events affecting world markets — notably Russia’s invasion of Ukraine — and to some extent by bottlenecks in refining, which grew worse for several weeks starting in mid-September but have eased again.

So what is the Republican plan to bring gas prices down? There isn’t one.

What about inflation more generally? You can make the case that large deficit spending early in the Biden presidency fed inflation (although it had little effect on the most politically salient prices, for energy and food, which have soared around the world).

If you’re worried about the inflationary impact of budget deficits, however, you should know that almost the only concrete economic policy idea we’re hearing from Republicans is that they want to extend the Trump tax cuts, which would … substantially increase the deficit.

But if you believe that cutting taxes without any plausible plan for offsetting spending cuts isn’t a problem even in a time of inflation, markets beg to disagree. Look at what happened to the pound and British interest rates after Liz Truss, the quickly deposed prime minister, announced an economic plan that, broadly speaking, looks a lot like what Republicans are proposing here. (There’s more to it than that, but still.)

The bottom line is that while the G.O.P.’s election strategy is all about blaming the Biden administration for inflation, the Republican Party doesn’t actually have any plan to reduce inflation. To the extent it has an economic plan at all, it would make inflation worse.