Biden soared among crucial suburban voters. Democrats? Not so much.

By Thomas B. Edsall 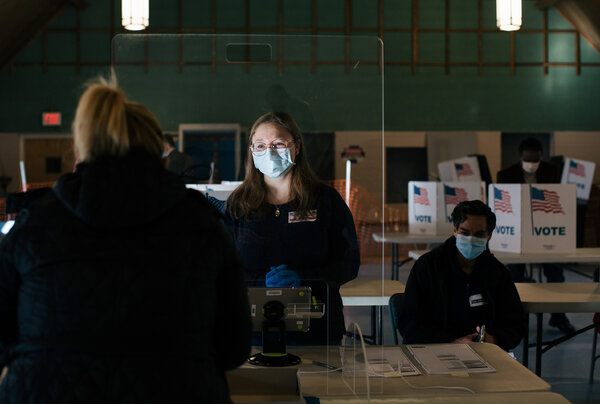 In battleground congressional and statehouse districts, the same pattern appeared over and over again this year. At the top of the ticket, Joe Biden won, often handily. Further down the ticket, in contests for seats in the House and state legislatures, Democratic candidates repeatedly lost.

Take the 34th State Senate District in the northwest suburbs of Minneapolis. The district has all the earmarks of an ideal Democratic target in the era of Donald Trump. It has a median household income of $101,644, far higher than the $68,703 national median; it is 86.8 percent white but 49.3 percent of residents over 25 have a college degree, compared with 36 percent nationally.

The 34th is just the kind of upscale, well-educated community that has found the Trump presidency repellent.

At the presidential level, that calculation proved dead right. Biden beat Trump there, carrying what had traditionally been a Republican community by a solid 7.6 percentage points.

But at the state legislative level, it was a different story: Bonnie Westlin, the Democratic-Farmer-Labor candidate for the State Senate, lost to Warren Limmer, the Republican incumbent, by just under 2 percentage points. Westlin was not alone.

As more detailed analyses of the 2020 election emerge, one thing is clear: For millions of voters, a vote against Trump did not mean a vote for the Democratic Party.

In 2018, Democratic gains in congressional and legislative races were clearly the result of animosity to Trump that found expression in voting against Republicans not named Trump — because Trump was on not on the ballot. With Trump on the ballot this year, however, these same voters discovered that they could voice their disapproval of him by voting against his re-election, while returning to their more conservative instincts by voting Republican in the rest of the races.

A spate of recent news stories illustrates the Democratic conundrum.

Across the country, suburban voters’ disgust with Mr. Trump — the key to Mr. Biden’s election — did not translate into a wide rebuke of other Republicans, as Democrats had expected after the party made significant gains in suburban areas in the 2018 midterm elections. From the top of the party down to the state level, Democratic officials are awakening to the reality that voters may have delivered a one-time verdict on Mr. Trump that does not equal ongoing support for center-left policies.

Or take California, which had been a Democratic gold mine in recent decades. Not only did Republicans win back three of the seven House seats the party lost in 2018, but as Ben Christopher wrote on the nonprofit news site Cal Matters, “the blue wave of 2018 yielded to a red riptide.”

Jeremy B. White elaborated at Politico:

The myth of lock step liberal California took a hit this election. Voters in the deep-blue state rejected a progressive push to reinstate affirmative action, sided with technology companies over organized labor and rejected rent control. They are poised to reject a business tax that had been a decades long priority for labor unions and Democratic leaders.

Liberals, White continued, “thought 2020 was their moment to secure long-desired changes: California’s electorate has become steadily more diverse and Democratic in recent decades, relegating its once-mighty Republican Party to the political margins,” but they “miscalculated. There was no bigger example than voters’ decisive rejection of Proposition 16. The ballot measure would have reinstated affirmative action and directly repudiated what liberals consider a racist chapter of California’s recent past.”

In a major win for the tech giants of the gig economy, California voters defied organized labor and liberal interest groups to approve Proposition 22, exempting such firms as Uber, Lyft, DoorDash and Instacart from requirements that they treat their workers as employees qualifying for benefits and worker protections, rather than as independent contractors.

In Texas, where Democrats were hoping to further capitalize on 2018 victories, the Texas Tribune reported:

Texas Republicans managed to avoid net losses in the state and U.S. House this election cycle in part because voters in key districts showed a willingness to vote Democratic at the top of the ballot and Republican lower down.

I asked Yphtach Lelkes, a political scientist at the University of Pennsylvania, about the increasing centrality of the suburbs in elections. His reply signaled some of the Democrats’ future problems:

As Democrats and Republicans continue to gather strength in high- and low-density areas, respectively, the swing voters will be found in the suburbs. Democrats will have to respond to the more progressive wings of the party but fend off accusations of socialism that may turn off suburban voters. With Trump out of the White House, and with it, his bombastic rhetoric, I expect Republicans will have an easier time with suburban voters than they had over the past four years.

The ambivalence of suburban voters in 2020 — their clear hostility to Trump combined with their reluctance to support Democrats in downballot races — poses a dilemma for Democrats looking for sustained growth in a post-Trump era.

If the 2020 movement in relatively affluent well-educated suburbs away from Democratic voting for legislative and congressional candidates is more than a temporary phenomenon, then maintaining the House majority, as well as having a shot at winning control of the Senate, will prove to be a tough challenge. These jurisdictions are just where Democrats are seeking to strengthen their congressional majority and to win majorities in state legislatures.

Texas provides a case study in the damage suburban defection can inflict on Democrats.

Robert M. Stein, a political scientist at Rice, supplied The Times with data on the top five Republican-held state house districts targeted by Texas Democrats in 2020. The five districts — two in Collin County north of Dallas, two in Tarrant County (Fort Worth) and one in Dallas County — Stein noted, were “predominately white suburban or exurban districts with above average education and income for Texas.”

What happened in these districts on Nov. 3? Biden carried all of them, by an average of 6.5 points, Stein wrote, but all the Democratic challengers for state legislative offices fell short.

The strategic importance to the Democratic Party of converting traditionally Republican voters in the upscale regions of the country at both the federal and state levels is evident in county-level voting data. As the chart below shows, from 2016 to 2020, Democrats continued to hemorrhage votes in low-income, low-education counties, once the base of the party, and to make up for those losses with gains in high-income, high-education counties.