MUMBAI, India — India today is like the Mad Hatter’s tea party — partly funny, partly weird — and hidden behind it is an incredibly tragic soliloquy of pain. More than six million confirmed coronavirus cases. About 100,000 deaths. The economy expected to contract by 12 percent. China trying to take over territory on a disputed border.

Yet if you had switched on news television in India in the past two months, you would have found a country obsessed with a singular subject: the taming of Bollywood, supposedly a wild, drug-addled place where horrible things happen to outsiders; India’s Gomorrah, infested with vile liberals and Muslims.

This hysterical campaign of vilification and the persecution of numerous actors is an attempt to distract people from Prime Minister Narendra Modi’s failure to handle the coronavirus pandemic and a sinking economy.

On June 14, as India became fourth on the list of countries worst hit by the pandemic, Sushant Singh Rajput, a 34-year-old actor, hanged himself from a ceiling fan in his apartment in Mumbai. Many in the film industry were aware of his mental health problems. A report by the police confirmed the young actor’s death as suicide.

India’s National Crime Records Bureau estimated that there were 381 suicides every day in the country in 2019, a majority of them by men living in the cities. The young, accomplished actor’s death did not go unnoticed in the midst of the pandemic. It saddened people.

But Mr. Rajput’s family in the Indian state of Bihar, more than 1,000 miles away, claimed that he was murdered and filed a complaint in late July with the police in Bihar. The family accused his girlfriend, Rhea Chakraborty, a 28-year-old actor, of abetment of suicide and of stealing several million rupees he had been offered for a new movie. (He had not signed on to the movie.)

A torrent of misogyny followed on social media and numerous television networks. Ms. Chakraborty was called a gold digger, a thief. A popular Indian news network portrayed her as a witch, accusing her of practicing “black magic” on Mr. Rajput.

After the misogyny came the politics. Mumbai is the capital of the state of Maharashtra, which is ruled by Uddhav Thackeray of the Shiv Sena party. He is a former ally of Mr. Modi who scorned the prime minister’s Bharatiya Janata Party and formed the state government with two opposition parties. The slight wasn’t forgotten or forgiven.

On Aug. 1, rumors were floated on social media that Mr. Thackeray’s son was a friend of Ms. Chakraborty and that was why the “murder case” was quashed. The Mumbai police recently claimed that over 80,000 fake accounts were created on various social media platforms to discredit its investigation into the actor’s death.

A study of online behavior by the University of Michigan concluded that conspiracy theories suggesting that Mr. Rajput was murdered were amplified by members the ruling B.J.P. and the TV networks that operate as extensions of the Hindu nationalist establishment. Leaders and allies of the B.J.P. supported a demand by the deceased actor’s family that a federal agency probe his death.

There was a method to the madness: Mr. Rajput’s native state of Bihar, which sends 40 representatives to the Indian Parliament, is scheduled for state elections in October. Mr. Modi’s B.J.P., hoping to strengthen its grip on power in Bihar, positioned itself as fighting for justice for a son of the soil who was “murdered.” “We haven’t forgotten. We won’t let you forget,” reads a B.J.P. poster with the party’s electoral symbol and Mr. Rajput’s smiling face on it.

All this, as the pandemic was raging, the economy was tanking and about 2.5 million migrant workers from Bihar who had lost their jobs in Indian cities had returned to their villages.

On Aug. 19, federal investigators took over the case. Two other top agencies were brought in to investigate murder and money laundering. Nothing came out of it.

That is when, in late August, some old WhatsApp messages between Ms. Chakraborty and Mr. Rajput’s staff and friends, suggesting she procured marijuana for him, were broadcast by the right-wing television networks.

The Narcotics Control Bureau opened an investigation. The agency arrested Ms. Chakraborty and claimed that she was actively running a drug syndicate. She denied the charges, was refused bail and was sent to prison. (Last week, a top government medical board confirmed Mr. Rajput’s death was a suicide, and on Wednesday morning, after almost a month in prison, she was granted bail by a court.)

Social media accounts affiliated with the Hindu right and TV networks, which essentially work as extensions of Mr. Modi’s party, started frothing about the wild, wild ways of the film industry and its copious consumption of drugs. Beyond distraction, the assault on Bollywood, the most powerful cultural force in India, had a clear purpose: to force the film industry into complete silence and submission, and line up behind the B.J.P.’s Hindu majoritarian project.

On Sept. 21, personal messages from WhatsApp were again mysteriously leaked and plastered on television screens by news networks to suggest that one of India’s biggest movie stars, Deepika Padukone, had asked her manager to buy drugs for her. 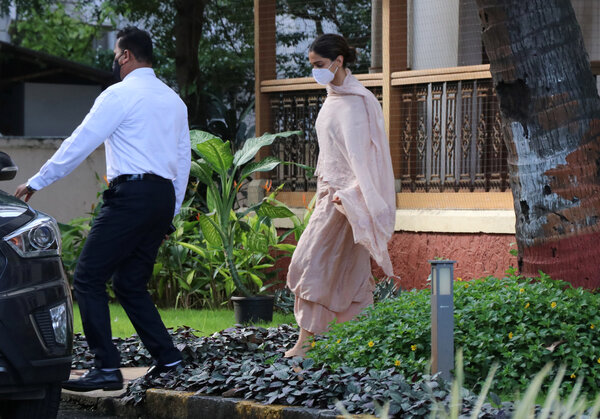 The right-wing TV networks have attacked Ms. Padukone and other stars who have been questioned by the bureau with unprecedented vehemence, insinuating that they are part of a drug nexus in the film industry. Ms. Padukone has denied consuming or supplying drugs to anyone. The witch hunt has scared various brands into suspending their advertising campaigns with actors who have been named, even if only in gossip columns.

That Ms. Padukone was summoned and her reputation besmirched made me wonder whether it was retribution for a moment of dissent against Mr. Modi’s government in January, when Ms. Padukone joined a student protest against a discriminatory citizenship law.

Bollywood, a $2.4 billion industry that provides employment to about a million people in India, has always been a secular and culturally open space. Some of its most popular stars and filmmakers are Muslims, which Hindu nationalists resent intensely. Some Bollywood actors and producers have cozied up to the Hindu nationalist establishment, but the film industry is largely seen as the bastion of wasted liberals who are not nationalist enough for Mr. Modi’s “New India.”

The Hindu nationalists are hoping this sudden and unexpected assault on Bollywood will force the film industry into complete submission to a government keen on wiping out dissent and liberal ideas. They want Bollywood at their command, an accessory to furthering their exclusivist, majoritarian politics.

In our greatest moments of joy and sorrow, Indians turn to songs and dialogue and stories from our films. Our films are what bring us together as a nation across our religious and cultural diversity. Many filmmakers have bent to the pressure from the government and many more will, but the Hindi film industry has outlived many autocratic regimes.

The Hindi film industry survived “The Emergency,” the 21 months of Prime Minister Indira Gandhi’s tryst with dictatorship between 1975 and 1977. It survived the attempts of the Bombay underworld to take it over. It survived the religious riots and bomb blasts of the early ’90s. It will survive this assault too.

India’s love for films is a force multiplier that brings people together irrespective of religion, caste or regional loyalties. The Hindi film has its own language, its own cultural ethic, its own ideas about where India’s destiny lies. The current crisis is unlikely to be able to destroy that. As someone who has been an intrinsic part of journalism, politics and the movie industry, I am confident of that.

Pritish Nandy is a poet, journalist, filmmaker and former member of the Indian Parliament.

Tags: Actor, Coronavirus;COVID-19, Cyb
You may also like
Recent News:
This website uses cookies to improve your user experience and to provide you with advertisements that are relevant to your interests. By continuing to browse the site you are agreeing to our use of cookies.Ok