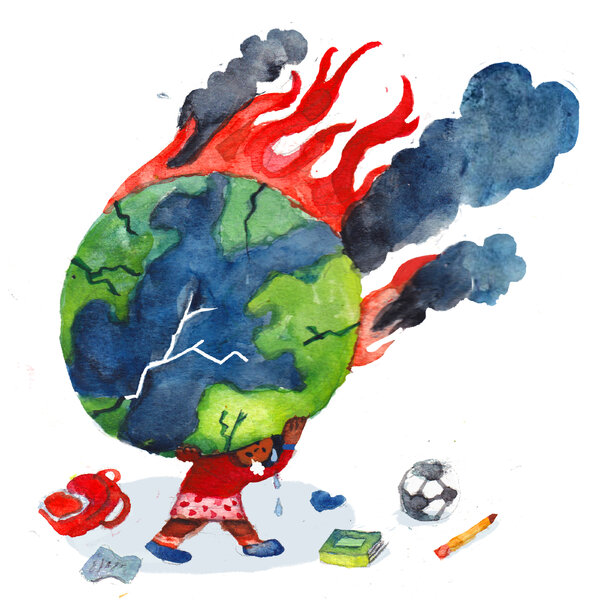 By Frederica Perera and Kari Nadeau

Dr. Perera and Dr. Nadeau are professors who study the health effects of air pollution on children.

Climate change and air pollution — both largely driven by fossil fuel emissions — inflict a huge toll on the health of children. This is especially true within low-income communities and communities of color. The recent Supreme Court decision, West Virginia v. Environmental Protection Agency, that curtails the E.P.A.’s power to reduce greenhouse gas emissions from power plants will greatly exacerbate this harm.

The Clean Power Plan, the federal regulation adopted as part of the Clean Air Act under President Barack Obama, which is at the heart of the ruling, would have required states to meet targets for reduction of carbon dioxide emissions from electric power plants. Utilities could meet them in part by shifting from coal to cleaner sources. The court’s majority sided with coal companies and Republican states, ruling that Congress had not given the E.P.A. the authority to reduce power plant emissions in the broad manner proposed in the plan.

Going forward, a failure to sharply reduce U.S. emissions from power plants and rapidly transition to clean energy will make it virtually impossible for the world to stay below 1.5 degrees Celsius (1.8 degrees Fahrenheit), the threshold laid out by the U.N. Intergovernmental Panel on Climate Change to avoid catastrophic effects of climate change.

As researchers who study the health effects of air pollution in children — in utero through adolescence — we recently reviewed hundreds of studies and concluded that climate change is a threat multiplier for infants and children, placing nearly every child around the world at risk from at least one climate-intensified hazard: extreme heat, severe storms and floods, wildfires, food insecurity and insect-borne diseases.

Prolonged heat exposure — especially for people without access to cooling — can increase the risks of preterm birth and low birth weight, as well as heat stress and kidney disease. Infants and children are less able to regulate body temperature in conditions of severe heat, and they must depend on care by adults who may be unaware of the risks.

Extreme weather events, like Hurricanes Katrina, Sandy and Harvey, have displaced more than 900,000 Americans, and many children suffer from PTSD and depression as a result. Wildfires in the Western United States now expose over 7 million children to lung-damaging smoke every year, and infectious diseases like Lyme disease have sharply increased among children, in part because of climate change.

Fossil fuels are responsible for the majority of human-caused air pollution globally, and in the United States, air pollution has long been recognized as a trigger of asthma attacks in children. It is now understood to be a cause of asthma and other respiratory diseases. The list goes on: Infant death, preterm birth, reduced I.Q., attention problems, attention deficit hyperactivity disorder, autism, structural and functional changes in the brains of children and mental health conditions in children and adolescents have all been linked to air pollution.

We are now learning that climate change and air pollution can combine to increase adverse health effects. For example, wildfires, made more frequent and severe by climate change, release vast quantities of particulate matter and other pollutants, adding to the emissions from burning fossil fuels. The failure to reduce emissions from power plants will sustain unhealthy air quality in places where 137 million Americans live. That’s more than a third of the total U.S. population.

Studies have shown that concurrent exposure to heat and air pollution is increasing the incidence of preterm births, as well as childhood asthma hospitalizations. As more children are exposed to air pollution, extreme temperatures and stress from climate change, the cumulative effects on their health could be serious.

There are many reasons for the disproportionate toll of climate change and air pollution on children’s health. Fetuses, infants and children are uniquely vulnerable because they develop so rapidly and because they lack the defense mechanisms that adults have.

Children breathe more air relative to their body weight than adults, which increases their exposure to air pollutants, and their narrower airways are vulnerable to constriction by air pollutants and allergens. Because children require more nutrients and fluids while they are growing, they are more vulnerable to food and water shortages. Children are more prone than adults to physical injury and psychological trauma from the displacement that frequently follows weather disasters. And they have a long remaining lifespan during which early illnesses such as asthma or mental health conditions may persist.

While all children are vulnerable, the health burden from these threats is far greater for low-income children and for children of color. In the United States, Black and Hispanic children have disproportionate exposure to air pollution because polluting sources are frequently located in disadvantaged neighborhoods. Discriminatory policies, including redlining, have created urban heat islands in communities of color where there are fewer trees and shaded areas where children live, play and go to school.

The Supreme Court decision will be costly for children and their families, not only in terms of the pain and suffering of children, but because caring for a preterm baby or a child with asthma puts a strain on an entire family. The emotional and financial stress of caring for the child can be considerable, and the extra time that is needed to care for the child may make it difficult for the parent to hold down a job. The Supreme Court decision is an especially bitter pill given that we already know the Clean Air Act has delivered health and environmental benefits for all Americans— estimated at $2 trillion as of 2020, exceeding its costs by a factor of 30.

Under the court’s decision, the E.P.A. can still write standards that require power plants to reduce their pollution, but the piecemeal approach will take time. In the meantime, it is critical that the Senate follow the House of Representatives and pass the reconciliation bill containing strong investments in climate and environmental justice solutions. These investments will help hasten the transition from fossil fuels, reducing the threats to children and adults alike from climate change and air pollution. But there is no question that the conservative majority on the court has taken away the most powerful solution to cutting pollution from power plants.

Frederica Perera is a professor at Columbia’s Mailman School of Public Health and the founding director of the Columbia Center for Children’s Environmental Health. Kari Nadeau is a professor in the departments of medicine, pediatrics, otolaryngology and epidemiology and population health at Stanford.