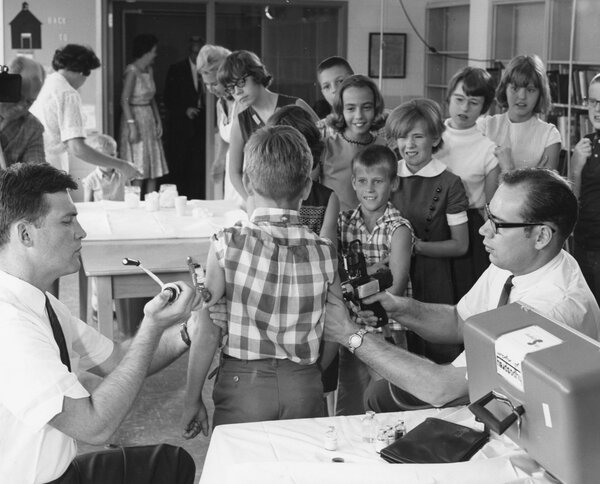 As of this writing, I have been fully vaccinated for four months and eight days. I reside in an area where vaccination rates have surpassed what is perceived to be herd immunity standards. So I feel as protected as possible under the circumstances.

Yet I am angered by the failure at the federal, state and local levels to mandate that the reluctant, the recalcitrant and the reckless roll up their sleeves and become inoculated.

More than 600,000 have died in this country alone. When is enough too much?

I understand, although I disagree, that safety concerns must sometimes give way to religious accommodations, and I fully comprehend that there are those who may have legitimate health issues that preclude their participation, but beyond that, get in line.

Only an emergency use authorization, not full approval? Give me a break. We have just lived through more than a year in collective hell. I can’t be silent while others die a needless, senseless death.

It is well past the moment of no return. Stop handing out lottery tickets and start handing down laws. Get the shot. Now!

For most, the overwhelming relief at being vaccinated is not having to worry any longer about harboring the illness asymptomatically, passing it on to someone else, and causing them harm.

We now have the means in this country for every person to avoid that torment. How there is a single person left who won’t leap at the chance is impossible to understand.

Personal freedoms must be protected but not at the expense of the well-being of the broader community.

Early in the pandemic, I grumbled to my husband about wearing a mask. He replied, “It’s not just about you.” I needed that!

Recently a young man who works in our building came to our apartment, and I asked if he was vaccinated.

“Don’t you have parents, grandparents?” I asked.

He said yes, his mother has been after him to be vaccinated.

It’s not about you, people. It’s about all of us.

The Heat Wave and Fossil Fuels

Symptoms of a fossil-fuel-disrupted climate have struck the Pacific Northwest. The time is now to bury all things related to fossil fuels! We need to ditch the subsidies and divest from these companies. We need to rush to clean energy solutions and ban all new fossil fuel infrastructure. We need to thoroughly free ourselves from these unhealthy and polluting fuels.

What calamity will open our collective eyes to the scope of this crisis? When will we aggressively mitigate this problem? Where will the next crisis strike? How many lives will be lost? There are so many questions and so little time.

A common reality with respect to multifamily cooperatives and condominiums is the failure of residents and their elected boards to set aside sufficient funds in reserve to perform future repairs and replacements as the buildings age.

Sufficient funding would require residents to pay higher maintenance and common charges. Often, the result is special assessments when the work can no longer be deferred.

The Best Antidote to Charges of Election Fraud: Truth and Logic

Re “What if the Military Starts to Doubt Our Elections?” (Opinion guest essay, June 17):

Elliot Ackerman gives us one more reason to open a national dialogue about the alleged stealing of the 2020 presidential election. This topic has been the elephant in the room long enough, and Democrats need to stop thinking that it will just magically disappear.

If a large portion of our electorate believes that the election was stolen, that is a threat to our democracy and our stability as a country, because some voters will believe that any election not going their way is illegitimate. The best antidote for that kind of thinking is a big slice of truth wrapped in logic.

Ask them why they would believe that every Republican secretary of state in all of our states is dishonest when the odds are much greater that Donald Trump himself is the one being crooked and dishonest. Then remind them that you are referring to the same Donald Trump who was asking state legislatures to overturn the election.

Whether in a national town hall meeting or just people proactively discussing it with friends and family, the subject does need to be addressed. Otherwise, the notion that the election was stolen will continue to hover over us like the ominous clouds that precede a tornado.

Tags: US Politics, Vaccines Immunizat
You may also like
Recent News: