The first column I ever wrote was about the April 2008 Democratic presidential debate between Barack Obama and Hillary Clinton. It took place in the National Constitution Center in Philadelphia.

The debate was a mess. As I wrote at the time:

“The moderators spent about 40 minutes on a trite list of recriminations apparently intended to bait the candidates into a ‘Jerry Springer’-like brawl. Barack Obama was again asked to address the kerfuffle he caused by labeling rural voters ‘bitter’ and to explain his relationship with the frightening Reverend Wright, and Hillary Clinton was again pushed back on her heels for saying that she had ducked bullets in Bosnia.”

I focused that column on the lack of discussion of environmental issues.

Since then, I have covered many more presidential debates — sometimes writing about them, sometimes discussing them on television or social media. At one time, I was into the spectacle of it all as much as anyone else. I waited for the defining moments and the slip-ups, the best zingers and the worst flubs.

But debates have come to be about sport and sparring rather than a true comparison of the relative readiness of the candidates. They are too much theater, too little substance. 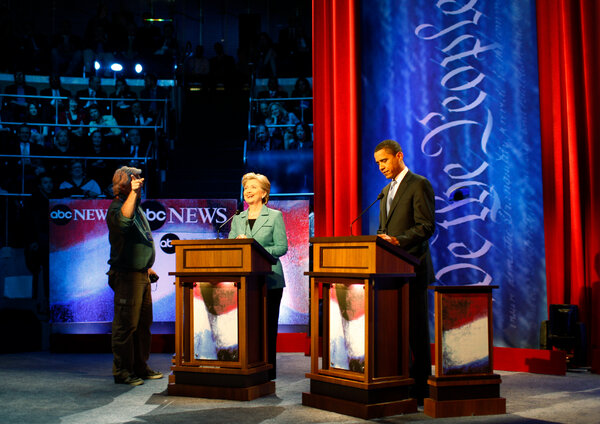 The debates test the performative aspect of leadership: stamina, mental agility, wit. Policy is discussed, but rarely if ever in greater depth than what the candidates have already published in some way. Times have changed. Candidates post their policy positions on their websites, readily accessible from voters’ phones.

Furthermore, it’s not clear to what degree debates alter the trajectory of a race anyway. As John Sides wrote in Washington Monthly magazine in 2012:

“That presidential debates can be ‘game changers’ is a belief almost universally held by political pundits and strategists. Political scientists, however, aren’t so sure. Indeed, scholars who have looked most carefully at the data have found that, when it comes to shifting enough votes to decide the outcome of the election, presidential debates have rarely, if ever, mattered.”

Plus, nearly 900,000 Americans have already voted. And, according to CNN, there are “28 million ballots already requested and another 43 million set to be automatically mailed to voters.”

Maybe there are true undecided voters who will use debate performance to make up their minds, but I simply do not believe this is a significant constituency. This election is already underway. People are already voting. Minds are already made up.

For this reason, I’m not necessarily looking forward to Tuesday’s debate between Donald Trump and Joe Biden.

Will it be entertaining? Likely. Will it change the contours of the race? Unlikely.

These regular presidential debates are a relatively recent occurrence in American presidential politics. According to the Commission on Presidential Debates, “1948 and 1956 were the only public debates among presidential candidates prior to 1960.”

Furthermore, there were no moderators in the 1948 debate. In fact, one of the most famous series of debates in history, the 1858 exchanges between Abraham Lincoln and Stephen Douglas that set the stage for Lincoln’s presidential run, had no moderator.

In some ways, it is the moderators who complicate the debates, who add an extra element that is not always useful. One could argue that today’s candidates lack the decorum to pull off a no-moderator debate, but in some ways that would be the only way that they could engage each other on the topics they want to discuss, rather than those the moderators want them to discuss.

Indeed, we don’t need a debate.

What will it really tell us that we don’t already know? What will it truly reveal? The debate will show us how the candidates converse and clash. It will show how they respond when attacked and how they recover — or not — when bruised.

But none of this, at this late date, should be the determinant of how one votes.

Trump is actively threatening to assault our democracy by refusing to say that he will accept the results of an election if he loses, by refusing to say that he would ensure a peaceful transfer of power from him to Biden. He is assaulting our democracy by undermining confidence in the election and by lying about mail-in voting, a necessity for many during a pandemic.

Trump has done so much to degrade this country, to divide it, to destroy it, that there is nothing he can say or do during a debate to redeem himself.

Debates are simply a formality, a modern ritual, one with far less meaning than people think. And this one will be even more useless. The choice is already clear.

Tags: 2020 election, Presidential deb
You may also like
Recent News:
This website uses cookies to improve your user experience and to provide you with advertisements that are relevant to your interests. By continuing to browse the site you are agreeing to our use of cookies.Ok