Mitch McConnell, the Senate majority leader, delights in confirming Republican-nominated jurists. District courts, appeals courts, most especially the Supreme Court — he wants to fill them all. In fact, with his party’s having largely given up on legislating in recent years, this may be what Mr. McConnell regards as his main duty. It is certainly the part at which he excels.

But for Mr. McConnell to keep this job, his party must keep control of the Senate. And that challenge got considerably more ulcer-inducing with the death of Justice Ruth Bader Ginsburg last week.

Nothing reminds voters of the importance of who holds the Senate quite like a nasty court fight. Typically, the issue energizes Republican voters far more than Democrats. But this time, as befitting 2020, the situation is knottier. Democrats are still spitting mad about how Republicans cheated President Barack Obama out of his Supreme Court pick, Merrick Garland, in 2016 — based on some rubbish about how a vacancy shouldn’t be filled during a presidential election year. And now there are signs that Republicans’ rush to confirm the federal judge Amy Coney Barrett just a few weeks from Election Day could rally Democrats as much as their own team.

As has been noted, Mr. McConnell finds himself in the rare situation where his two loves — holding power and confirming judges — are in tension. 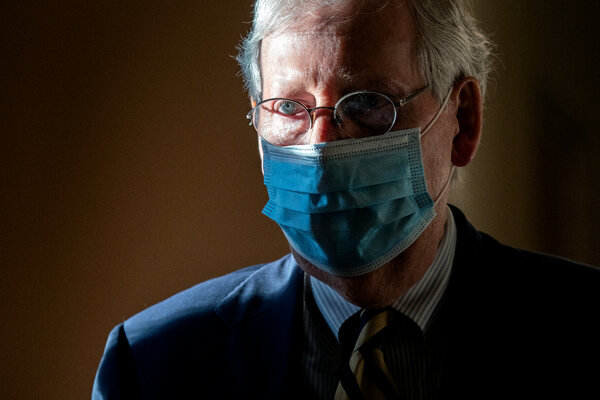 One early data point that has Democrats feeling good: money. Since Justice Ginsburg’s death, contributions have come pouring into progressive groups and individual campaigns at a level that political veterans say is unlike anything they’ve ever seen. ActBlue, which focuses on small-dollar donations, pulled in more than $100 million last weekend. Republicans are hoping for a similar surge when Mr. Trump announces his pick.

The specter of losing the Senate had already been giving Republicans night sweats. With a 53-47 majority, they are defending 23 seats this cycle, versus Democrats’ 12, and even some usually safe incumbents have been struggling. The moment the news broke of Justice Ginsburg’s death, Mr. McConnell began gaming out how to maximize the electoral benefits: Should the confirmation vote occur before Election Day, giving lawmakers something to brag about on the campaign trail? Would it be better to hold the hearings but delay the vote until the lame-duck session, to keep Republican voters focused on how much is at stake? How much will Democratic turnout be juiced — and where?

For some of Mr. McConnell’s members, the focus on the courts could be a lifeline — for others, a millstone. The most likely casualties are Cory Gardner in Colorado and Susan Collins in Maine. These blue-state Republicans were already having trouble convincing independents and moderates that they aren’t Trump tools while not alienating their base voters, who expect them to be precisely that. Recent polls have shown Ms. Collins trailing her Democratic challenger, Sara Gideon. The Trump era has not been good for the senator’s popularity, and her 2018 support of Justice Brett Kavanaugh was a defining moment. Another court battle is likely to reopen that old wound and slather it in salt.

Ms. Collins is one of two Republicans to declare that a confirmation vote should be pushed back until after the election. Mr. Gardner, also lagging in his race, has gone the other way, announcing that he’s fine with plowing ahead. So many options. So much uncertainty.

For Republicans in Trumpier states, such as Kansas and Iowa, this fight may prove useful, consolidating and energizing base voters who might have otherwise stayed home. Senator Kelly Loeffler of Georgia, desperate to tie herself to the president, rushed to issue a fund-raising appeal on Friday night, declaring herself “the first U.S. senator to call for a nomination.”

Senator Lindsey Graham of South Carolina may gain the most. An ardent presidential bootlicker, he has been locked in a surprisingly tight race with Jaime Harrison, a Democrat. As the chairman of the judiciary committee, Mr. Graham will lead the confirmation process, which he believes should advance post haste. This is, to put it mildly, a departure from his position four years ago.

“If there’s a Republican president in 2016 and a vacancy occurs in the last year of the first term, you can say Lindsey Graham said, ‘Let’s let the next president, whoever it might be, make that nomination,’” he said in a video clip that resurfaced last week. “And you can use my words against me, and you’d be absolutely right.” (He reiterated this take in 2018.)

Some South Carolinians may do just that. But Mr. Graham’s high-profile role in the coming hearings is expected to give his candidacy a much-needed shot of adrenaline with the base.

In purplish North Carolina, Senator Thom Tillis, one of the most endangered Republicans, was quick to declare his eagerness to confirm a nominee. This might win him more love from religious conservatives; it could also prompt more suburban women and young voters to turn out for his opponent, Cal Cunningham.

Then there’s Arizona, where a relatively stable race has become a locus of drama. Mark Kelly, a Democrat, has been running solidly ahead of Senator Martha McSally for months, and the state is considered one of the Democrats’ top pickup opportunities. But because the race is a special election — Ms. McSally was appointed by the governor in December 2018 after losing her bid for the state’s other Senate seat — the winner could be seated at the end of November. If Mr. Kelly won and were seated early, and if the confirmation vote were postponed until the lame-duck session, that would give Democrats one more “no.”

That’s a lot of “ifs,” but this should give some sense of the nightmare of trying to game out the political impact of all this.

Not that Mr. McConnell had a choice. In the midst of all the handicapping, the confirmation drama should serve as a reminder that ideas still matter in politics — though perhaps not in the way one would think. Republican voters have long been motivated, far more than Democrats, by a hunger to shift the courts in their direction. This is partly because of conservative opposition to abortion and the desire to see Roe v. Wade overturned. But base voters worry more broadly about the shifting culture and the decline of “traditional values.” They are increasingly counting on conservative jurists to take their side in the culture wars and save them from the horrors of modernity.

Republican lawmakers recognize that the party’s policy positions, what few it has left, anyway, tend to lack broad appeal. Unwilling or unable to win the battle of ideas in areas such as health care and immigration, they are content to outsource the work — and risk — to the judicial branch. As the Republican commentator Amanda Carpenter observed on “The Bulwark Podcast” this week, over the past decade, Republicans gave up on consensus building and doing “the hard work of passing laws,” and instead are aiming to “have the courts solve our problems.” Even with total control of the government, Republicans failed to repeal and replace Obamacare, which they had been promising for years. Instead, they have kicked it to the courts to dismantle.

Republicans understand that ideas matter. They also know that having apparently run out of appealing ones, they must find other ways to exert power. For them, these court fights are increasingly a matter of political life and death.

Tags: Senate races, State Legislature
You may also like
Recent News:
This website uses cookies to improve your user experience and to provide you with advertisements that are relevant to your interests. By continuing to browse the site you are agreeing to our use of cookies.Ok