Japan has contained Covid-19 far better than most other large countries. But it now faces the challenge of holding the Olympics this summer — and welcoming athletes from around the world — without causing new outbreaks.

The status of the Games has become a political issue in Japan, with polls showing most residents favoring either postponement or cancellation. Many people are frustrated with how Prime Minister Yoshihide Suga, in his first year in office, is handling the situation.

Yet for all of the criticism, it seems possible that Japan will hold a successful Olympics while keeping the virus under control. This morning, I want to walk you through the issue, with help from a couple of charts and from my colleague Motoko Rich, The Times’s Tokyo bureau chief.

Japan’s Covid response has been so successful that it achieved a remarkable feat: Overall deaths declined in 2020, even as they were surging in the U.S. and much of the rest of the world. Japan kept its Covid toll low, and its pandemic measures caused a decline in some other fatalities, like those from the flu and vehicle accidents.

What did Japan do right?

It already had a culture of mask wearing to prevent illness, and masks became almost ubiquitous early last year. (This article by Motoko, from almost a year ago, compares mask habits in Japan and the U.S.) The government also virtually closed its borders. And it was quick to focus on the settings where the coronavirus was most likely to spread, warning people to avoid the “three C’s” — closed spaces, crowded places and close contact. 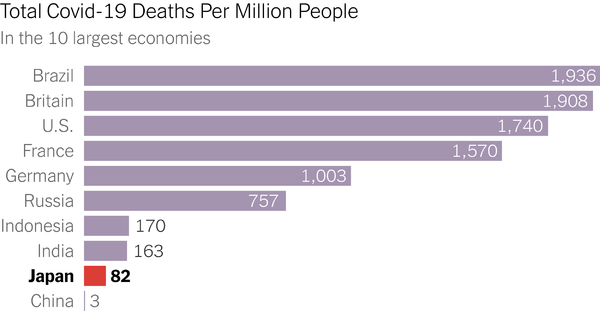 A lack of vaccine urgency

This success has led to one problem, however. Japan has been slow to vaccinate its population, with only 2 percent of residents having received a shot. There is less urgency to do so in a country where fewer than 11,000 people have died of Covid.

Japanese regulators have so far approved only Pfizer’s vaccine and are still evaluating Moderna’s and AstraZeneca’s, despite their obvious success elsewhere. Even if those vaccines are approved soon, the government’s contracts with the vaccine makers do not require the delivery of many doses until late this year, Motoko notes. The country appears to be months away from reaching the vaccination levels of the U.S., Britain, Israel and other world leaders.

That is worrisome, because Japan has not defeated Covid. Cases have risen over the past two months, and the government declared a state of emergency in several major cities, urging new restrictions on activity. “Japan has recently lost a little control of the caseloads,” Motoko says. “Of course, it’s nothing like New Delhi, but it’s not like Sydney or Taipei, either.”

Suga and Olympic organizers insist that the Games will go on, and there are billions of dollars at stake, not only for Japan but also for the Olympic organizers, major sponsors and television networks, including NBC. For athletes who have trained for years, the cancellation of the Games — after their postponement last year — would be deeply disappointing.

The biggest safety measure is the barring of fans from outside Japan. At a typical Olympics, fans make up the great majority of visitors to the host country. By barring them, Japan has restricted entry to athletes, coaches, journalists and Olympics officials, many of whom will probably have been vaccinated. They will all need to take several Covid tests before coming, and athletes will be tested every day during the Olympics, with others being tested less frequently.

The dangers will also decrease if Japan can meet its goal of vaccinating most residents 65 and older — the people most vulnerable to serious Covid symptoms — by July 23, when the Games begin.

Even if that happens, though, Japan will not be free of risk. After months of allowing few international visitors, the country will be letting in tens of thousands of people. They will then interact with nearly 80,000 local Olympic volunteers, who will drive athletes and officials around Tokyo, serve as interpreters and do other tasks. A Covid-free Olympics seems unlikely. The question will be whether Japan can quickly identify, isolate and treat people who get the virus.

In this way, the Games may present a particularly intense version of the balance that many countries will be trying to achieve in 2021 — moving back to normal life while avoiding a new wave of a deadly virus.

“Inside Japan, historical currents are also important drivers,” Motoko and Hikari Hida have written. “The wartime cancellation of one Tokyo Olympics, in 1940, and the triumphant staging of another a quarter-century later are potent symbols of first regret and then rebirth.”

Dr. Megan Ranney, for CNN: “I wish we would either limit the Games to just the athletes, or insist on vaccination for all — including spectators and host communities …. Yes, these events deserve to go on, for the sake of the athletes — but we cannot pretend that the current recommended precautions are adequate.”

President Biden is adjusting the U.S. vaccination strategy to focus on local efforts targeting younger people and those hesitant to get a shot.

The number of Americans getting a shot has fallen by about 50 percent since April 13, the day officials paused the Johnson & Johnson vaccine, these charts show.

“We do have students who have kind of disappeared”: Millions of children have fallen behind in school.

Virus resources: Some people have skipped their second dose. Here’s why you should get it.

House Republicans are looking to oust Representative Liz Cheney from her leadership position over her criticism of Donald Trump.

HP, Microsoft and other businesses called for expanded voter access in Texas, and a group of Houston executives criticized Republican-backed voting bills in the state Legislature.

A federal judge accused the Justice Department under William Barr of misleading Congress about whether Trump should have been charged with obstructing the Russia investigation.

A panel will decide today whether Facebook’s ban of Trump will remain in effect.

China is building electric-car factories almost as fast as the rest of the world combined.

The U.S. birthrate continued to drop last year. Total births fell to the lowest level since 1979.

Before Monday’s fatal collapse in Mexico City, engineers had warned that structural weaknesses in a 10-year-old subway line could lead to disaster.

Biden’s quiet steps to strengthen U.S. support for Taiwan are increasing the risk of war, Peter Beinart argues in The New York Times.

Get Hip: If you follow Barstool Sports or own a mug that says “Girlboss,” you may be cheugy.

A Times Classic: Go backstage at the (prepandemic) Metropolitan Opera.

Lives Lived: Patrick O’Connell helped shatter the stigma surrounding AIDS by developing awareness-raising campaigns, one of which included a red ribbon that became ubiquitous. He died at 67.

Many psychologists use the word flourishing to describe a person’s overall well-being — physical, mental and emotional, which all feed on each other. “It’s living the good life,” Tyler J. VanderWeele, an epidemiologist, told The Times.

In the pandemic, many people have understandably been doing the opposite of flourishing: languishing, or feeling stagnant with dulled emotions and motivation. A Times story on languishing was one of our most read articles in recent weeks.

But there are simple habits backed by science that can help you flourish. They include celebrating small moments in life, like a warm bath or hanging out with a friend; setting aside time once a week to reflect on the things you’re grateful for; and volunteering, even a couple of hours a week. (Are you flourishing? Take this quiz.)

“People think that in order to flourish, they need to do whatever their version of winning the Olympics is, or climbing a mountain, or having some epic experience,” Adam Grant, a psychologist, said. The reality is the opposite. — Sanam Yar, Morning writer

Make a crunchy, flaky tart with any ripe summer fruit.

In her ninth novel, “Secrets of Happiness,” Joan Silber “delivers merely something humane, elegant and wise,” according to the Times review. Read an excerpt.

Take design inspiration from an urban farmstead and a tennis pavilion (really).

The hosts have a contender for weirdest presidential photo.

The pangrams from yesterday’s Spelling Bee was gratify. Here is today’s puzzle — or you can play online.

Today’s episode of “The Daily” is about Japan’s low birthrate. On “The Argument”: How progressive a president is Biden?

Lalena Fisher, Claire Moses, Ian Prasad Philbrick and Tom Wright-Piersanti contributed to The Morning. You can reach the team at [email protected].

Tags: Covid, Olympics, The
You may also like
Recent News: