Good morning. Biden and Trump meet in their final debate, and we break it down for you. 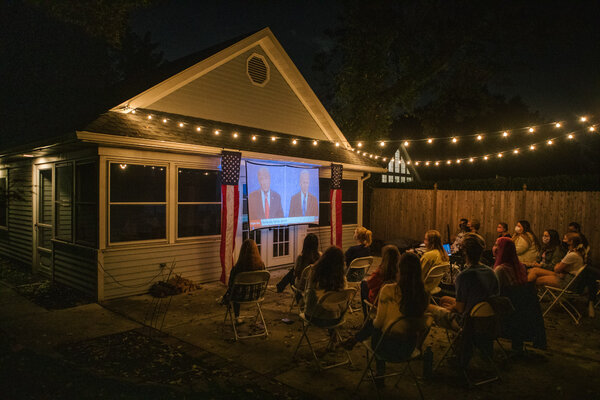 Last night’s presidential debate felt much more normal than this year’s first one. The candidates interrupted each other only occasionally rather than constantly. They argued about big policy issues like the coronavirus, foreign policy and more.

But the debate wasn’t normal by the standards of nearly all of American history. It wasn’t normal because one of the nominees — the sitting president — told one lie after another. He did so about the virus, North Korea, China, Russia, climate change, his own health care policy, Joe Biden’s health care policy, Biden’s finances and the immigrant children who were separated from their parents.

I understand you may be tired of hearing about President Trump’s untruths. I’m tired of writing about them. They hardly qualify as surprising anymore.

But it’s impossible to analyze a debate filled with untruths without first acknowledging them. They undermine an event meant to highlight differences between candidates. They undermine democracy. To ignore them is to miss the biggest story: a president trying to construct his own reality.

How are voters supposed to choose between, say, two different health care plans if one candidate makes up stories about both plans?

No previous president has behaved this way. Democrats often accused George W. Bush of lying, and Republicans accused Barack Obama of lying. And both men made questionable statements and statements that later proved untrue. But when they proved untrue, Bush and Obama stopped making the claims. Trump just keeps making them.

“From a lying perspective, Trump is even worse tonight than in the first debate … an absolute avalanche of lying” — CNN’s Daniel Dale, who’s been probably the most committed Trump fact checker.

“Biden was again imperfect from a fact check perspective. He made at least a few false, misleading, or lacking-in-context claims. Trump was, as usual, a serial liar.” — Dale. (A Times fact check of both candidates is here.)

“Trump was far more disciplined. He landed a few sharp attacks, even as he diverted into some issues that seem more like fodder for the conservative media-sphere.” — The Times’s Lisa Lerer.

“The subjects Trump most wishes to discuss are ones largely disconnected from those that matter most to voters.” — Jane Coaston, Vox.

The moderator, NBC’s Kristen Welker, won praise as the best, most commanding moderator of this debate season (and she had the advantage of the candidates being muted for stretches while the other was speaking).

“I take full responsibility, but China brought it here. It’s not my fault,” — Trump, on the virus.

“People are learning to die with it.” — Biden, after Trump said the country was learning to live with the virus.

“Why didn’t you do it [while vice president?] You had eight years with Obama. You know why, Joe? Because you’re all talk and no action,” Trump, on Biden’s criminal-justice plans.

“It’s not about his family or my family. It’s about your family.” — Biden, after an exchange of personal accusations.

“I would transition away from the oil industry, yes … The oil industry pollutes, significantly. It has to be replaced by renewable energy over time.” — Biden.

For more: See The Times’s main story; seven minutes of video highlights; and Times Opinion writers on the night’s best and worst moments.

Trump’s campaign has less money than advisers had anticipated for the final stretch, restricting its options.

Biden said he would establish a bipartisan commission of constitutional scholars to study ways to overhaul the judicial branch, in response to questions about whether he would try to add justices to the Supreme Court.

Reopened elementary schools do not seem to be causing significant virus outbreaks, according to data from random testing in the United States and Britain.

Hospitalizations in Europe are rising steadily. This map shows which countries are being hit hardest.

The Food and Drug Administration formally approved remdesivir as the first drug to treat Covid-19.

The Senate Judiciary Committee advanced Judge Amy Coney Barrett’s nomination in a 12-to-0 vote, with Democrats boycotting. The full Senate is set to confirm her to the Supreme Court on Monday.

Goldman Sachs admitted criminal wrongdoing in a global bribery case. Employees in Malaysia, the bank said, took part in a scheme to pay $1 billion in bribes.

An appeals court in California ruled that Uber and Lyft must treat their drivers as employees, not independent contractors. But Californians are about to vote on a ballot initiative, sponsored by the companies, that would exempt them from the same law.

A Morning read: Kate Armitage and Eric de Grandmont live in different countries, and they’ve never spent more than a week together in a single stretch. But the bond the couple forged over an online role-playing game proved to be real: They got married last month.

Lives Lived: She was a model for Disney’s animated heroine in “Snow White and the Seven Dwarfs,” and she and her husband rose to fame as a clean-cut, all-American dance team in Hollywood musicals and on TV. Marge Champion has died at 101.

IDEA OF THE DAY: In praise of Vermont

The coronavirus is spreading more rapidly in rural areas of the U.S. than in urban areas. But one rural state continues to do a fabulous job keeping the virus away: Vermont.

The starkest sign of Vermont’s success is that it has not recorded a single Covid-19 death in more than two months.

Vermont is succeeding partly because it has not allowed the virus to become a partisan issue. The Republican governor, Phil Scott — unlike many other Republican politicians around the country — has consistently told people to take the virus seriously. “He started wearing a mask early in the pandemic and has stood at the back of the room in many of the state’s coronavirus briefings, letting Dr. Mark Levine, Vermont’s answer to Dr. Anthony Fauci, dominate proceedings,” Bill McKibben, a Vermont resident, wrote in The New Yorker.

Vermont also benefits from having a high degree of social trust among its residents, as Maria Sacchetti explained in The Washington Post. And Vermont has two strong local media organizations — VTDigger and Seven Days — that keep residents informed and that both took an intriguing step early in the pandemic, McKibben notes: They shut down their comments sections, to prevent misinformation from spreading.

The key to this savory-sweet beef stew is spending enough time browning the meat — don’t rush the process. It goes well with couscous, rice or crusty bread.

A book of the times

In “Billion Dollar Loser,” the journalist Reeves Wiedeman chronicles the rise and fall of WeWork and its co-founder Adam Neumann. The story of WeWork is emblematic of the last decade in tech, Jennifer Szalai writes in a review.

The book is full of wild stories: Neumann passed himself off as a tech visionary, even though he rarely used a computer, and a high-school student from Queens once ran WeWork’s IT department.

Sacha Baron Cohen is reviving his satirical character Borat, a Kazakh journalist. In this long-awaited sequel, “Borat Subsequent Moviefilm,” Borat is returning to America — or as he says, “Yankeeland.”

It’s “an amusingly harebrained scheme,” Devika Girish writes in The Times’s review, “but there’s nothing in this moviefilm that matches the elegant social experiment of the first, which sought to explore where precisely American civility departs from morality.”

Baron Cohen spoke to The Times’s Maureen Dowd about reviving the character (and more).

Some of the late-night comedy hosts went live after what Jimmy Kimmel referred to as “The Thrilla’ in Nashvilla, the second and final presidential debate.”

The pangram from yesterday’s Spelling Bee was awkwardly. Today’s puzzle is above — or you can play online if you have a Games subscription.

Or try this week’s news quiz.

Thanks for spending part of your morning with The Times. See you Monday. — David

P.S. The word “quacksalvery” appeared — in an obituary this week for the magician James Randi — for the first time in The Times, as noted by the Twitter bot @NYT_first_said.

Today’s episode of “The Daily” is about the final presidential debate.

Claire Moses, Ian Prasad Philbrick and Sanam Yar contributed to The Morning. You can reach the team at [email protected].

Tags: DEBATE, Final, The
You may also like
Recent News: