We’re covering South Asia’s vaccine scramble and the state of US-Russia relations after the summit. 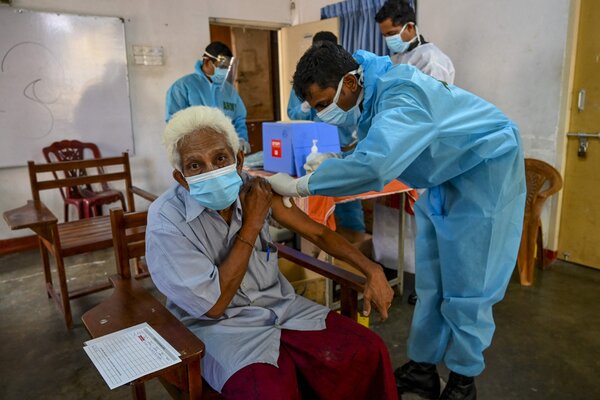 Sri Lanka is tapping Japan. Nepal has asked Denmark. Bangladesh has appealed to its diaspora in the U.S. South Asian countries are turning to the rest of the world to jump-start inoculation campaigns that have stalled since India halted vaccine exports in March.

Wealthier countries have recently offered to step up vaccine donations to the developing world — such as the Group of 7’s promise of one billion shots — but health officials say the pledges are vague and far off, and do not address immediate needs.

Obstacles: A first batch of seven million doses was earmarked by the U.S. for Nepal, Sri Lanka and other countries in Asia this month, but the details of their arrival are still unclear. The situation is desperate: Older people in Nepal have been waiting for months for a second shot.

Context: India’s neighbors began vaccinations this year with a combination of doses donated by India and purchased from the Serum Institute of India. But as cases rose in the country, Prime Minister Narendra Modi’s government blocked exports.

The Taj Mahal reopened its doors to visitors, part of a broad easing of restrictions by local governments.

As Japan’s latest outbreak recedes and vaccinations slowly pick up, officials said they would ease Tokyo's state of emergency.

The U.S. will spend $3 billion on developing antiviral pills to treat Covid-19.

What’s next in U.S.-Russia relations?

After a summit between President Biden and President Vladimir Putin, the mood shifted in Moscow, where the foreign policy establishment expressed some cautious optimism about the way forward.

Russian analysts and officials said they saw in Biden a recognition that he had to contend with Russian interests. Some commentators on state television celebrated the fact that Biden referred to Russia as a “great power” — a departure from President Barack Obama, who had pointedly called Russia a “regional power.”

Americans called Biden almost too optimistic about a change of Kremlin policy, though allies say optimism is an essential ingredient to achieve progress. Biden said his strategy was to figure out what his adversary wants, which in Putin’s case is “legitimacy, standing in the world stage.” He said, “They desperately want to be relevant.”

Mission accomplished? Biden had three big goals on his Europe trip: Convince allies that America was back; gather them in common cause against the threat of China; and establish some red lines for Putin. Our correspondents write that he achieved the first two, but it’s unclear whether progress was made with Russia.

The government’s campaign against dissent in Hong Kong is escalating. After a raid on the headquarters of Apple Daily, the news outlet owned by the media mogul Jimmy Lai, the city sent a warning to the media: Be careful what you write.

“Don’t get involved with them, and keep a distance from them,” Hong Kong’s security minister, John Lee, said, referring to the paper’s journalists.

Apple Daily wasn’t backing down and has plans to print 500,000 papers, several times its average daily circulation of 90,000, on Friday. “As difficult as the current circumstances may be, we will carry on with our jobs with the aim to publish our papers as normal tomorrow,” the Next Media Trade Union wrote in a statement.

Details: The police arrested the top editors of Apple Daily, froze its assets and raided its newsroom, saying it had found dozens of articles calling for foreign sanctions on Hong Kong.

Three Chinese astronauts docked with the core module of a space station that is under construction and expected to be completed by the end of next year.

Many moderate-leaning Iranians are planning to sit the presidential election out, according to polls, after top clerics vetted candidates and eliminated anyone seen as a challenge to their conservative policies and views. Ebrahim Raisi, an ultraconservative judiciary chief, appears to have the only real chance of winning.

An internet outage at a U.S.-based hosting platform disrupted the websites of several Australian banks, the airline Virgin Australia and the Hong Kong Stock Exchange, among other companies.

A former mayor accused of being a drug trafficker in the Philippines was killed, one of dozens of officials identified by President Rodrigo Duterte as “narco politicians,” many of whom have been killed by the police.

Temperatures in Arizona and Nevada soared past 115 degrees (46 Celsius) this week, and doctors are warning that people can get third-degree burns from the sizzling asphalt. It’s not even summer yet and parts of the U.S. are facing severe drought and heat waves. Scientists say these are the latest signs that the world needs to get global warming under control.

More on Apple in China: Our reporter talked to Doug Guthrie, who worked for Apple and warned the company about doing business in China under Xi Jinping. His predictions ended up being prescient.

From Opinion: Frank Bruni devotes his last column in The Times to the role of opinion writers, and the degree to which they “have contributed to the dynamics we decry: the toxic tenor of American discourse, the furious pitch of American politics, the volume and vitriol of it all.”

Maneskin was little known outside the band’s native Italy before they won this year’s Eurovision Song Contest, catapulting them in front of 180 million viewers. The winning song, “Zitti e Buoni,” has now been streamed on Spotify more than 100 million times.

But can they keep it up? Eurovision acts typically disappear from the spotlight as soon as the competition wraps, yet Maneskin’s members, the oldest of which is 22, are hoping to build upon their existing fame and newly won international interest to become a rare long-term Eurovision success story, as our reporter Elisabetta Povoledo writes from Rome.

“For us,” the bassist Victoria De Angelis said in a recent interview, “music is passion, fun, something that lets us blow off steam.” Since their founding in 2015, the band has gone from busking to high school gigs to small-time battle of the band competitions, before performing on the 2017 Italian edition of the talent show “The X Factor.”

Though they didn’t win, they captured the hearts of the Italian viewing public.

These new and noteworthy titles include a book on Edgar Allan Poe’s fascination with science.

“Curb Your Enthusiasm,” “Chappelle’s Show,” “Arrested Development.” We’ve got picks for the 21 best comedies of the 21st century.

The latest episode of “The Daily” is about Ralph Northam, a former Virginia governor.

You can reach Melina and the team at [email protected].

Tags: Briefing, friday, Your
You may also like
Recent News: