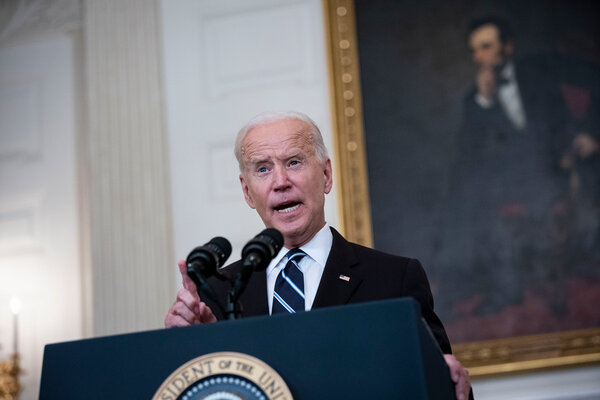 President Biden on Thursday used the full force of his presidency to get two-thirds of the American work force vaccinated against the coronavirus.

Private sector businesses that have 100 or more employees will have to require vaccination, or mandatory weekly testing, for their workers after Biden instructs the Occupational Safety and Health Administration to draft a rule.

The administration also intends to compel vaccination for federal workers, contractors, and 17 million health care workers in hospitals and other institutions that receive Medicare and Medicaid funding. Most federal workers will face disciplinary action or dismissal if they refuse.

“We can and we will turn the tide on Covid-19,” Biden said at the White House.

The Delta variant’s spread has killed roughly 1,500 Americans a day in September. Biden initially steered away from any talk of making vaccines mandatory, but the surge has made him decide on the more aggressive new plan.

Missing link: About 27 percent of eligible people in the U.S. age 12 and older have not received any Covid vaccinations, according to data from the Centers for Disease Control and Prevention.

A fire at a Covid hospital in North Macedonia killed at least 14 people, all of whom were patients.

The pandemic disrupted learning for more than 400 million children in South Asia, the U.N. said on Thursday.

Covax, the U.N.-backed program to vaccinate the world, said that it would have 1.4 billion doses available this year, half a billion fewer than it had forecast.

The New York Times breaks down U.S. pediatric hospitalizations in these charts. Nearly 30,000 children with Covid entered hospitals in August.

“I can clearly say that this is a historic day in the history of Afghanistan as Kabul Airport is now operational,” a Qatari official said on Thursday. The flight, with scores of Canadians and a handful of U.S. and British citizens, was going through Qatar.

The Taliban’s spokesman thanked Qatar for its assistance in getting the airport running and flying in 50 tons of aid. He said it was an “opportunity to call on all Muslim and international countries to lend a helping hand to the Afghan people and start delivering humanitarian aid.”

There was no indication that the Taliban would allow the tens of thousands of Afghans who qualify for special U.S. visas to leave. They said that Afghans with dual citizenship would be allowed to leave.

Related: China pledged to give $30 million in food and other aid, as well as three million Covid vaccine doses.

Kim Jong-un, the country’s leader, attended a national military parade on Thursday, but skipped the opportunity to raise tensions with the U.S. through a fiery speech or display of long-range ballistic missiles.

The middle-of-the-night parade in Pyongyang, in celebration of the government’s 73rd anniversary, included military reservists, police officers, and factory and health workers. Kim appeared in a western-style tan suit, draped on his visibly thinner frame. It was a departure from parades in October and January, which showcased new missiles.

Bigger picture: The parade was aimed at North Koreans who have borne the brunt of his efforts to rebuild the economy. Kim has repeatedly apologized for economic woes caused by sanctions and the pandemic.

Quotable: “North Korean society is under tremendous stress because of decisions made by the Kim regime. So the parade is intended to show strength and serve as a quarantine morale booster​,” said one international studies expert in Seoul​.

An essay by a retired newspaper editor criticizing celebrity culture and big corporations ricocheted across China’s internet and Communist Party websites. It made many wonder whether leaders backed those ideas, and how far Xi Jinping might go with them.

Shanghai officials last month forbade local elementary schools to hold final exams on the English language, shocking many Chinese people with an interest in English, who saw it as another pushback against Western influence — and openness to the world.

Vietnam was bracing for the arrival of Tropical Storm Conson, with 500,000 soldiers on standby, Reuters reported.

The Philippine governing party nominated President Rodrigo Duterte as its vice-presidential candidate in next year’s elections, a move widely seen as a way to keep him at the center of power, The A.P. reported.

President Jair Bolsonaro of Brazil is temporarily banning social media companies from removing certain content, including his claims that the only way he would lose next year’s election is if it were rigged.

Moscow’s intelligence services have influence over Russian criminal ransomware groups and insight into their activities, but they do not control the organizations’ hacking targets, according to a new report.

The Supreme Court delayed the execution of a Texas inmate who has requested to have his pastor touch him and pray aloud in the death chamber.

Novak Djokovic is a step closer to the coveted Grand Slam after winning his U.S. Open match on Wednesday and moving to the semifinals. He will face off against Alexander Zverev on Friday.

As consumers are becoming more aware of the seafood industry’s environmental problems, a fishless fish boom is growing more likely. Sophisticated alternatives, both plant-based and lab grown, have begun to attract investment and appear at restaurants around the world.

“Just days after the catastrophe, American culture became a culture of prohibitions: a disciplined terrain where testimony was discouraged, and interpretation actively discredited,” writes Jason Farago, the critic at large for The Times.

The art that followed in that silence went small or minimalist: the spare memorial “Tribute in Light,” the personal dramas of the playwright Neil LaBute and the novelist Claire Messud in which the tragedy mundanely transformed their characters. Then the Iraq war made Sept. 11 and its interpretations the undercard.

A more positive response radiated from the site of the World Trade Center, one that, as the architecture critic Michael Kimmelman writes, “has ended up being the ultimate retort to Sept. 11 and the emblem of New York’s resilience.” Lower Manhattan is still a work in progress — but better than it was, more humane and livable. The district’s residential population tripled in the aftermath of the attacks.

The reinvention of the area is also a fitting tribute to Minoru Yamasaki, the architect of the twin towers. The towers projected strength, physically and culturally, but were delicate as well, Alexandra Lange writes in Bloomberg CityLab. They were also supposed to be more sociable, but budget cuts killed his ideas for pools, trees and an arcade. In the shadow of no towers, that gentle part of his vision came back stronger than ever.

Here’s how to keep your knives sharp.

We talked to sleep experts for tips on how to wake up on time and get more restful sleep.

The latest episode of “The Daily” is about an F.B.I. agent disillusioned with the U.S. war on terror.

Whet Moser wrote the Arts and Ideas section. You can reach the team at [email protected].

Tags: Briefing, friday, Your
You may also like
Recent News: