We’re covering France’s bid to avoid a lockdown, competing town halls ahead of the U.S. election and Boris Johnson’s play for time. 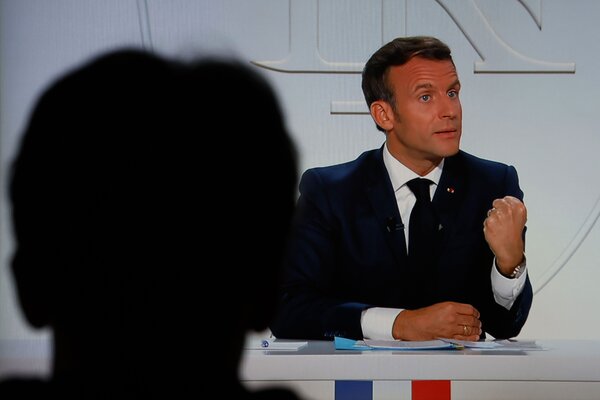 France’s half measures against coronavirus

France thought it had beaten the coronavirus. But a roaring second wave has left French leaders scrambling for solutions to avoid another painful lockdown.

The French president, Emmanuel Macron, on Wednesday announced a curfew for Paris and eight other major cities. The pressure on intensive care beds was intolerable, he said, adding, “Our caregivers are exhausted.”

If the virus was ever under control in France, that was before the summer. But experts say that after that period, the French, like so many others elsewhere in Europe, let their guard down.

The weekly number of new cases in Europe is now at its highest point since the start of the pandemic, rising to seven million from six million in 10 days, according to the regional director of the World Health Organization’s Europe office, Hans Kluge. The number of daily deaths has passed 1,000 for the first time in months, he said.

Here are our latest updates and maps of the pandemic.

London will join other big cities in Europe, including Paris and Berlin, in tightening restrictions to stem a rapidly rising second wave of coronavirus cases in the region.

Singapore and Hong Kong have reached a preliminary agreement to establish a travel bubble.

The U.S. has passed a total of eight million total known coronavirus cases, as the country climbs toward its third peak.

Eleven members of the Swiss Guard have tested positive for the coronavirus, prompting fears of an outbreak within the small corps charged with protecting the pope.

While Mr. Biden adopted a conciliatory tone, continuing to answer voters’ questions after the forum had ended, Mr. Trump was often on the offensive, sometimes sparring with his moderator or taking a more combative approach.

Here’s our guide to what happened and our fact check of both events.

Mr. Trump seemed to confirm a recent Times report that he has $400 million in outstanding debts. He called the sum “a tiny percentage of my net worth” and insisted none of it was owed to Russia.

Mr. Biden committed to giving an answer before the election about whether he would expand the number of Supreme Court justices, though he declined to indicate what that number might be.

The candidates differed on the topic of masks, with Mr. Biden brandishing his own while Mr. Trump suggested — largely inaccurately — that scientists were divided about their worth.

Trump refused to denounce the QAnon conspiracy theory, instead saying: “I do know they are very much against pedophilia. They fight it very hard.”

Will the events matter? Probably not. Presidential debates rarely cause major shifts in the polls, and these events were less memorable than a debate. But it’s often hard to know what matters in presidential politics.

On Brexit and the coronavirus, Boris Johnson stalls for time

Prime Minister Boris Johnson of Britain has reached a moment of truth on two critical issues: the pandemic and Brexit negotiations with the European Union. But he is still playing for time — a strategy that could put lives and livelihoods at risk if he waits too long.

In the past weeks, Mr. Johnson has imposed localized restrictions in an attempt to avoid the two-week nationwide lockdown pushed by the opposition Labour Party and his own scientific advisers. He is also seemingly prepared to string out trade talks with Brussels, letting a self-imposed deadline pass on Thursday without a deal.