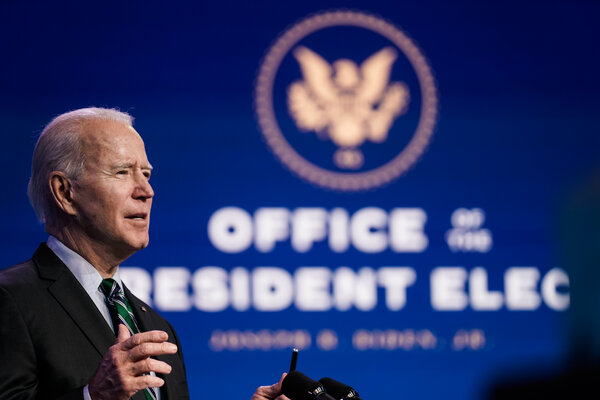 When he begins his presidency this week, Joe Biden will inherit a collection of crises, among them the coronavirus pandemic, economic turmoil, racial strife and the aftermath of the assault on the Capitol. To begin tackling them, Mr. Biden’s team has developed dozens of executive directives that he can issue on his own authority soon after Wednesday’s inauguration.

He will also begin reversing some of President Trump’s most hotly disputed policies, including rescinding the travel ban on several predominantly Muslim countries; rejoining the Paris climate change accord; ordering agencies to figure out how to reunite children separated from their families after crossing the southern border; and extending pandemic-related limits on evictions and student loan payments.

Potential violence: In many states, military vehicles and police barricades lined the streets near government buildings, and officials braced for the possible influx of pro-Trump protesters ahead of the inauguration on Wednesday.

Kamala Harris: The incoming vice president will officially resign her Senate seat today ahead of being sworn in on Wednesday. As Ms. Harris ascends to this barrier-breaking role, millions of Americans will see a more expansive version of the American family staring back at them.

Aleksei Navalny is arrested on his return to Moscow

The Russian opposition leader, who had been recovering in Germany since a near-deadly poisoning in August, was arrested on Sunday night at passport control at Sheremetyevo Airport in Moscow. The police also detained some of his supporters who had turned out to greet him at the airport.

Russia’s penitentiary service, which has said that Mr. Navalny was wanted for violating the terms of a prior suspended sentence, released a statement saying that he had been detained pending a court hearing.

Minutes before he was taken into custody, Mr. Navalny gave an impromptu statement to journalists in a transit area at the airport terminal. “I am not afraid,” he said. “I know that I am right. I know all the criminal cases against me are fabricated.”

Impact: Mr. Navalny’s arrest could set off protests and an international backlash. He has accused the Kremlin of trying to murder him in YouTube videos viewed more than 40 million times.

Riot police in Amsterdam on Sunday dispersed thousands of people, some throwing fireworks and stones, in protest against the Dutch government and its coronavirus measures. Around a hundred were arrested, according to local media.

Unmasked and standing close together, the protesters gathered on a central square lined with landmarks, including the Van Gogh Museum and the American Consulate, and waved placards that read “Dictatorship,” “Freedom” and “We are the Netherlands.”

Like most of Europe, the Netherlands is on lockdown, at least until Feb. 9. Infections remain high but the rate has slightly dropped, with 34 coronavirus cases per 100,000 inhabitants.

Analysis: Much like the Trump loyalists who stormed the United States Capitol, the Dutch protesters believe their political system needs to be uprooted. “These people live in their own truth, with their own news and own reality,” said Hans Nijenhuis, the editor of the country's largest newspaper. “As we have seen in the States, we can’t just ignore their discontent.”

British researchers’ decision to routinely record the genetic sequences of the virus helped them identify the new coronavirus variant.

Organizers of the Australian Open tennis tournament are facing a rebellion after nearly four dozen players learned that they would have to observe a strict 14-day quarantine because passengers on their flights had tested positive for the coronavirus.

President-elect Joe Biden’s incoming chief of staff warned that the U.S. death toll from the virus would reach 500,000 by the end of February.

The United States’ lack of a unified national strategy left governors facing off against lobbyists, health experts and a restless public consumed by misinformation, contributing to the country’s failure to combat the pandemic.

Can ‘Up’ carry on without Michael Apted?

The British director’s acclaimed documentary series, “Up,” has chronicled the lives of its subjects every seven years since 1964, inspiring international copycats and even an episode of “The Simpsons.” But Apted’s death this month at 79 has left the 11 remaining participants pondering the fate of a project that has spanned almost their entire lives.

Lead producer Claire Lewis, herself “70-ish,” may inherit the direction of the series, with the assent of the cast and crew. “We’re going to need an ambulance, if we ever did it again, to take us all around,” she said. “I think we’ll just have to say we’ll wait and see.”

Merkel’s potential successor: Armin Laschet was chosen as the next leader of Angela Merkel’s conservative Christian Democratic Union party, ahead of fall elections that will decide who succeeds her as chancellor.

Uganda election: Amid accusations of vote rigging, President Yoweri Kaguta Museveni was re-elected on Saturday as leader of the East African nation. It will be his sixth five-year term in office.

Luxury watch market: For the first time, China is the world’s largest importer of Swiss watches.

Snapshot: Above, researchers in Thailand catching bats as they fly out of the Khao Chong Phran cave. The scientists are looking for any potential links to the coronavirus fueling the pandemic, but have so far found only other coronaviruses in the bats.

Phil Spector: The highly influential rock ’n’ roll producer died from complications of Covid-19 on Saturday at the age of 81. Since 2009, he had been serving a prison sentence for the murder of a nightclub hostess he had taken to his home after a night of drinking in 2003.

Pixar’s “Soul”: In Denmark, the casting of a white actor to voice the Black hero of the animated film has fueled a debate about structural racism, and fanned anger about stereotyping and prejudice in European-language voice-overs.

What we’re reading: This Mainichi article on a “rent-a-person who does nothing” in Tokyo. “It’s a reminder that a presence, sometimes, is all that is needed,” writes Carole Landry, from the Briefings team.

Cook: Spiking this unfussy, old-fashioned butterscotch pudding with a little bourbon or Scotch isn’t strictly traditional, but it does add a pop of flavor.

Read: One of our 12 recently released book recommendations — among them, a spirited novel about lexicography, a history of the Himalayas and a “genre-defying catalog of things that no longer exist,” as our critic puts it.

Our At Home collection of ideas on what to read, cook, watch, and do can make staying safe at home tolerable, or even fun.

China is experiencing its worst surge of the coronavirus since last summer, forcing at least 22 million people into lockdown and challenging the government’s success in subduing the disease. Keith Bradsher, The Times’s Shanghai bureau chief, spoke to our colleagues from the Coronavirus Briefing about the latest outbreaks.

In Shanghai, Keith said, office buildings and apartment compounds are, once again, checking smartphone location tracking codes to ensure that residents haven’t traveled to hot spots. If someone has traveled to a risky area, that person must immediately report to the authorities and enter a home- or government-supervised quarantine.

“Mandatory immediate quarantine ordered by the government, in total isolation, of every symptomatic or asymptomatic person, plus all of their close contacts” has been China’s secret to containing the coronavirus, Keith said. “In some cases, they identify 800 close contacts per person, so their definition of a close contact is not very close at all.”

With the U.S. and Europe in the throes of another brutal surge, there has been a great deal of nationalistic sentiment in China promoting the country’s approach to the virus. “There are definite worries about the latest outbreaks,” Keith said. “But I have found a quiet confidence among many people that China has beaten this problem before and can do so again.”

Thanks for starting your week with me. See you next time.

Thank you
To Theodore Kim and Jahaan Singh for the break from the news. You can reach Natasha and the team at [email protected]

P.S.
• We’re listening to “The Daily.” Our latest episode is on a Republican lawmaker who voted to impeach President Trump.
• Here’s our Mini Crossword, and a clue: “This looks like trouble!” (four letters). You can find all of our puzzles here.
• The word “chiroptophobia” — the fear of bats, which has spiked during the pandemic — appeared for the first time in The Times yesterday, as noted by the Twitter bot @NYT_first_said.
• Yewande Komolafe and Eric Kim are joining The Times as cooking writers. Readers may remember Yewande’s 10 essential Nigerian recipes and Eric’s explanation of banchan, the small dishes that often accompany Korean meals.