At least 18 protesters were killed in Myanmar.

We’re covering the bloodshed in Myanmar after security forces opened fire on protesters, the latest blow to hopes for democracy in Hong Kong and the giant vaccination sites opening up in the U.S. 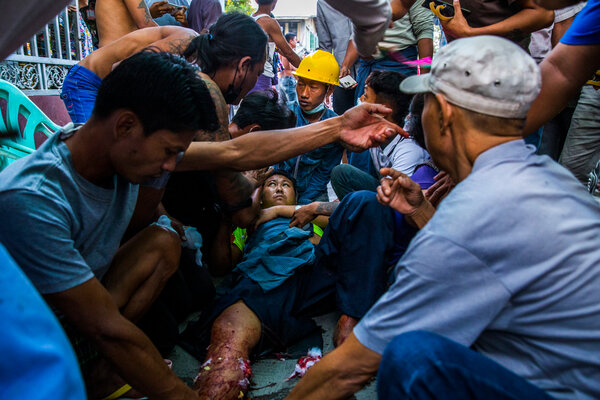 The security forces in Myanmar opened fire on demonstrators in several cities on Sunday, killing at least 18 people. It was the largest single-day toll since the protests began after the Feb. 1 coup.

The forceful response signaled a new toughness from the military after a month in which thousands have turned out regularly to protest the coup, which ousted the civilian government led by Daw Aung San Suu Kyi, the country’s most popular politician. The United Nations said that it had reports of deaths “as a result of live ammunition fired into crowds” in Yangon, Mandalay and Dawei, as well as in the cities of Myeik, Bago and Pokokku.

The police arrested at least 100 medical students in Yangon as they prepared to march in their white coats, witnesses said. Doctors have been at the forefront of the civil disobedience movement, and many have refused to go to their jobs at government hospitals.

At the United Nations: The military regime fired Myanmar’s ambassador to the world body on Saturday after he gave an impassioned speech to the U.N. General Assembly in New York, pleading for international help in restoring democracy to his homeland.

He called for the “strongest possible action from the international community to immediately end the military coup, to stop oppressing the innocent people, to return the state power to the people and to restore the democracy.”

The Hong Kong authorities on Sunday charged dozens of pro-democracy figures with violating the Chinese territory’s harsh new national security law. Any convicted could be sentenced to life in prison.

The charges are the latest escalation in the Chinese government’s efforts to bring Hong Kong firmly under control, and they represent the most forceful use yet of the wide-ranging security law, which has cemented Communist Party control over Hong Kong.

Details: The 47 people were charged each with a single count of “conspiracy to commit subversion.” The authorities said they committed this act by helping to organize an informal election last July to pick candidates from Hong Kong’s pro-democratic political camp to run for office, which was interpreted as violating the security law’s provisions against interfering with, disrupting or undermining the functions of the Chinese or Hong Kong governments.

Those charged will be arraigned today at a courthouse in the West Kowloon area.

A third Covid-19 vaccine for the U.S.

U.S. federal drug regulators on Saturday authorized Johnson & Johnson’s one-shot vaccine for emergency use, beginning the rollout of millions of doses of a third vaccine that could reach Americans this week.

The announcement came at a critical moment: A decline in coronavirus cases seems to have plateaued in the U.S., which has by far the world’s biggest outbreak.

One shot: Johnson & Johnson’s vaccine requires only one dose, instead of two, to be fully effective. Unlike the other vaccines by Pfizer-BioNTech and Moderna, it can be stored at standard refrigeration temperatures for at least three months.

Australia, normally a secondary market for big-brand stage shows developed in New York and London, has become an unexpected pandemic pioneer: a model and a test case for the global theater industry.

The Israeli government approved a measure to vaccinate tens of thousands of Palestinians, after facing fierce criticism over the small number of inoculations it had provided to Palestinians living under its occupation.

Auckland, New Zealand’s largest city, began a seven-day lockdown on Sunday, with most businesses forced to close, after an outbreak last month linked to a worker at the airport.

Asian-Americans rally after a fatal attack

The death of Vicha Ratanapakdee, an 84-year-old retired auditor from Thailand, has become a symbol for the vulnerability that many Asian-Americans feel in the pandemic.

Last month, he was taking a morning walk in San Francisco, where his daughter, above, lives, when a 19-year-old man charged into him at full speed, violently slamming him to the ground, according to the authorities. Our San Francisco bureau chief took a closer look at the attack, and explored the racist taunts, rants and worse that many Asian-Americans have endured from people who wrongly associated them with the coronavirus.

Trump returns: Former President Donald Trump delivers his first public address since leaving office at the end of a conservative conference on Sunday in Florida. Mr. Trump is serious at the moment about running for president in 2024, but some aides expect that he ultimately won’t go through with another bid.

Sexual harassment: A 25-year-old former aide to Gov. Andrew Cuomo of New York has accused him of sexual harassment, saying that he asked her questions about her sex life, whether she was monogamous and if she had ever had sex with older men. Her account followed another detailed accusation published last week.

China’s seniors: More than a thousand criminal cases have been filed against companies accused of retirement scams. China’s top judicial bodies have labeled the retirement industry one of the sectors hardest hit by what they call illegal fund-raising.

Snapshot: Above, a drive-through Covid vaccination site on a defunct airstrip in Connecticut. With the U.S. vaccine supply expected to swell in coming months, there is a rush to open more giant vaccination sites.

In memoriam: Michael Somare, 84, Papua New Guinea’s first prime minister, who played a major role in leading the country to independence from Australia.

What we’re reading: This heartening Daily Beast article about how the Maasai in Kenya are now saving endangered lions instead of hunting them.

Cook: A glistening tartiflette, filled with velvety potatoes, gets its golden top from the soft, pungent rind cheese it’s baked with.

Listen: Tracks from Post Malone, Pop Smoke, Jade Bird, Adrian Younge and others make up this week’s playlist from our pop critics.

Do: Some homeowners have turned their renovation projects into a creative outlet during the pandemic — from a redesigned laundry room to a new home theater.

March is here. Perhaps it’s time to try something new. At Home has ideas on what to read, cook, watch, and do while staying safe at home.

How to write a hit song

The video series “Diary of a Song” was created nearly three years ago by Joe Coscarelli, a pop music reporter for The Times, to explore what shapes an artist’s work. The series offers a behind-the-scenes look at how some of the year’s top hits go from shower thoughts to chart toppers.

Now 19 episodes in, the collection of making-of stories featuring artists like Billie Eilish and Taylor Swift has been viewed more than 12 million times on YouTube. The latest installment, with Olivia Rodrigo, above, debuted on Friday.

One of the inspirations for the series, Mr. Coscarelli said, was Ms. Swift’s meticulous documentation of her songwriting process — she has included demos, voice memos and studio videos as extras with her albums. That spirit of sharing was on display when the artist herself was eventually featured in 2019, in an episode devoted to her song “Lover.”

“When an artist realizes you just want to talk about the details of what they’re best at — like, why they chose this chord and not that one — they’re into it,” Mr. Coscarelli said. “It’s not hard to get them to open up.”

“We take what seem to be throwaway pieces of culture that you hear at the bodega,” said Alicia DeSantis, a Times deputy editor for visuals and multimedia, “and we show you the accomplishment it takes to create them.”

Thank you
To Theodore Kim and Jahaan Singh for the break from the news, and to Sarah Bahr for the Back Story. You can reach the team at [email protected]

P.S.
• There’s no new episode of “The Daily.” Instead, here’s the first episode of “Odessa,” a new Times podcast, about what happened when one Texas high school reopened during the pandemic.
• Here’s our Mini Crossword, and a clue: Baby horse (four letters). You can find all our puzzles here.
• Developers are working to improve the web accessibility of The New York Times, using technologies that enhance the user experience of our website and apps for all.