We’re covering protests in Spain, Britain’s rift with the E.U. and the latest blow to hopes for democracy in Hong Kong. 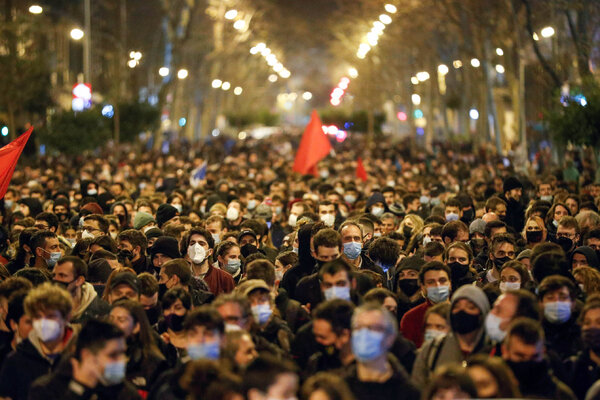 For more than a week, the streets of Barcelona, Madrid and other Spanish hubs have erupted in sometimes violent demonstrations. What began as a protest over the arrest of the Spanish rapper Pablo Hasél has become a collective outcry by a generation that has struggled through years of economic hardship and that sees a lost future even after the pandemic ends.

Barcelona was once one of the best and most fun places in Europe to be young. But the coronavirus crisis, which devastated tourism and shrank the national economy by 11 percent last year, has been catastrophic for Spain’s young adults. Now, 40 percent of Spain’s youth are unemployed, the highest rate in Europe.

“It’s not the same now for a person who is 60 — or a 50-year-old with life experience and everything completely organized — as it is for a person who is 18 now and has the feeling that every hour they lose to this pandemic, it’s like losing their entire life,” said Enric Juliana, an opinion columnist with La Vanguardia, Barcelona’s leading newspaper.

U.S. federal drug regulators on Saturday authorized Johnson & Johnson’s one-shot vaccine for emergency use, beginning the rollout of millions of doses of a third vaccine that could reach Americans this week.

The Israeli government approved a measure to vaccinate tens of thousands of Palestinians, after facing fierce criticism over the small number of inoculations it had provided to those living under its occupation in places like the West Bank, where Covid-19 cases are surging.

Australia, normally a secondary market for big-brand stage shows developed in New York and London, has become an unexpected pandemic pioneer: a model and a test case for the global theater industry.

A growing number of countries, including India, Hungary and Israel, have announced that they will push their Olympians to the front of their vaccination lines.

The ugly divorce between Britain and Brussels

As trade disputes pile up, Britain and the E.U. have fallen out politically and diplomatically with a speed and a bitterness that have surprised even pessimists about the relationship.

Tensions have flared since a new trade agreement formalized Brexit on Jan. 1. Britain refused to grant full diplomatic status to the European Union’s envoy to London, while European leaders lashed out at vaccine shortages, briefly threatening to rip up the agreement governing trade with a post-Brexit Northern Ireland.

In a sign of the battles to come, the Bank of England’s governor, Andrew Bailey, warned last week of a “serious escalation” in tensions if the E.U. tried to force banks to move the clearance of euro-denominated derivatives trading from London to the continent.

Analysis: “These are not purely teething problems,” said Kim Darroch, Britain’s former permanent representative to the E.U., citing the government’s explanation for Brexit problems. “They are structural problems that arise from not being in the single market. This is what a ‘hard Brexit’ looks like.”

Context: As always with Brexit, much of the antagonism is being driven by domestic politics, with Britain’s fast vaccine rollout serving as ammunition both for the pro-Brexit cause in Britain and for anti-British sentiment within the bloc.

The Hong Kong authorities on Sunday charged 47 pro-democracy figures with violating the Chinese territory’s harsh new national security law. The police said each person was charged with a single count of conspiracy to commit subversion. They will be arraigned today at a courthouse in the West Kowloon area and could face life in prison if convicted.

The 47 helped to organize an informal election in July to pick candidates from Hong Kong’s pro-democratic political camp to run for office. In doing so, the authorities say, they violated the security law’s provisions against interfering with, disrupting or undermining the functions of the Chinese or Hong Kong governments.

Context: The charges are the latest escalation in the Chinese government’s efforts to bring Hong Kong firmly under control, and they represent the most forceful use yet of the wide-ranging security law, which has cemented Communist Party control over the territory.

African-American sacrifice in World War I

Denied a send-off parade in New York and assigned to the French Army because their own countrymen refused to fight alongside them, the Black warriors of the segregated American armed forces were known as the “Harlem Hellfighters.” Above, the Meuse-Argonne American Cemetery and Memorial in France, where the bodies of some Black Americans in the 369th Infantry Regiment were interred.

It took the U.S. Army more than a century to adopt the moniker as the official special designation for the regiment, a distinction just approved by the Army in September and announced this year by the New York National Guard on the eve of Black History Month.

Myanmar: The security forces in Myanmar opened fire on demonstrators in several cities on Sunday, killing at least 18 people. It was the largest single-day toll since the protests began after the Feb. 1 coup.

Jamal Khashogghi: Even though the U.S. has accused Saudi Arabia’s crown prince of ordering the killing of the dissident Saudi writer, the Biden administration is wary of causing a break with an important Arab partner. The tension surrounding the release of an intelligence assessment on Mr. Khashogghi’s killing could complicate how the two countries interact going forward.

Trump returns: Former President Donald Trump delivered his first public address since leaving office at the end of a conservative conference on Sunday in Florida. Mr. Trump made clear in his speech that he was serious, for now, about running for president in 2024.

Snapshot: Above, a drive-through Covid-19 vaccination site on a defunct airstrip in Connecticut. With the U.S. vaccine supply expected to swell in coming months, there is a rush to open more giant vaccination sites.

Long-lost letters: For over 70 years, a cache of more than 700 letters lay undisturbed in the wreckage of the S.S. Gairsoppa, sheltered from the Atlantic Ocean by well-positioned mail bags. Now, conservators at the Postal Museum in London are piecing together these undelivered messages from the past.

“Marijuana light”: A once-ignored derivative of hemp called Delta-8-THC has become a hot seller for Americans looking for a loophole around marijuana laws.

What we’re reading: This bittersweet article in The New Yorker about the queer foster families that provided a refuge for L.G.B.T. youth in the 1970s.

Cook: Tartiflette, an Alpine potato and bacon casserole, bakes up golden and gloriously gooey thanks to its top layer of soft, pungent rind cheese.

Listen: For the past six weeks, the top Billboard song has been “Drivers License” by 18-year-old Olivia Rodrigo. Here’s how she made it.

Do: Some homeowners have turned renovation projects into a creative outlet during the pandemic, from a redesigned laundry room to a new home theater.

Start March with a bang. At Home has ideas on what to read, cook, watch and do while staying safe at home.

The Times Book Review is 125 years old — a moment for celebration, but also introspection. Parul Sehgal, a critic and former editor at the Book Review, looked back critically at its legacy. This is an edited extract from her thoughts on why now is the right time to delve into the past.

My brief, you could say, was to review the Book Review, to consider the coverage of “women, people of color, L.G.B.T.Q. writers” and changing mores in criticism. But what revelatory news could I possibly bring? The word “archive” derives from the ancient Greek arkheion, sometimes translated as “house of the ruler.” Who wanders there with any illusions?

What could those reviews contain? Some misjudgments, to be sure — masterpieces misunderstood in their time. A few preternaturally sensitive assessments. Fluorescent condescension and stereotype. Above all, the pleasant and dubious satisfactions of feeling superior to the past.

And yet. In recent years, The Times has faced scrutiny of the racial and gender imbalance in its reviews. One survey, which looked at nearly 750 books assessed by The Times in 2011, across all genres, found that nearly 90 percent of the authors assessed were white.

But what about the reviews themselves: the language, the criteria? When “women, people of color, L.G.B.T.Q. writers” were reviewed, how was their work positioned? What patterns can we trace, what consequences? And what do we do with this knowledge — how can it be made useful? When we come to know, what do we really see?

That’s it for this briefing. Have a great start to the week.

Thank you
To Theodore Kim and Jahaan Singh for the break from the news, and to Parul Sehgal for the Back Story. You can reach Natasha and the team at [email protected]

P.S.
• There’s no new episode of “The Daily.” Instead, listen to the first episode of “Odessa,” a new Times podcast, about what happened when one Texas high school reopened during the pandemic.
• Here’s our Mini Crossword, and a clue: It works a lot better when tired (three letters). You can find all our puzzles here.
• Developers are working to improve the web accessibility of The New York Times, using technologies that enhance the user experience of our website and apps for all.