Good morning. We’re covering the killing of dozens of civilians in Myanmar and the big push to dislodge the giant cargo ship stuck in the Suez Canal. 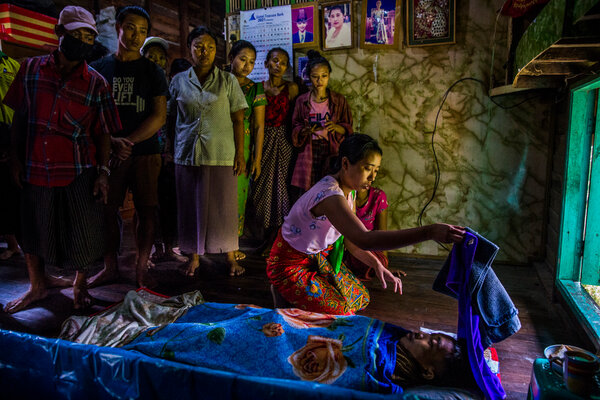 Saturday appeared to be the bloodiest day of protests since the Feb. 1 military coup.

The Assistance Association for Political Prisoners, a rights group based in Myanmar and Thailand, said it had documented 90 killings by the security forces. Myanmar Now, a respected news site, reported that 114 people had been killed.

The bloodshed took place in more than two dozen cities. A Times photographer captured these images.

“Today is a day of shame for the armed forces,” Dr. Sasa, a spokesman for a group of elected officials who say they represent Myanmar’s government, said in a statement. The U.S. ambassador to Myanmar, Thomas Vajda, said the security forces were “murdering unarmed civilians, including children,” and he called the bloodshed “horrifying.”

From inside: Since the coup, the Tatmadaw, as Myanmar’s military is known, has killed more than 420 people and assaulted, detained or tortured thousands of others. In interviews, four officers — two of whom deserted — paint a picture of an institution that has thoroughly dominated Myanmar for six decades.

Brazil is reporting more new coronavirus cases and deaths in the world per day than any other country in the world. Every hour, roughly 125 people there die from Covid-19.

In all, the virus has killed more than 300,000 people in the country, a crisis fueled by a highly contagious variant, political infighting and distrust of science. Hospitals are overwhelmed with a torrent of Covid-19 patients who are arriving younger and sicker.

“We have never seen a failure of the health system of this magnitude,” the executive director of Doctors Without Borders in Brazil said. “And we don’t see a light at the end of the tunnel.” Here’s how the number of cases and deaths are growing.

Context: The breakdown is a stark failure for a country that was a model for other developing nations, with a reputation for advancing agile and creative solutions to medical crises, including a surge in H.I.V. infections and the outbreak of Zika.

After weeks of decline followed by a steady plateau, coronavirus cases are rising again in the U.S.

Facebook has frozen the page of President Nicolás Maduro of Venezuela for violating policies against spreading misinformation about Covid-19.

While Russia is exporting its Sputnik V vaccine to countries in Latin America, Africa and Europe to great fanfare, it is quietly having to import supplies for its own population.

The giant cargo ship is still stuck in the Suez Canal

Salvage teams are hoping to take advantage of the full moon and swelling tides to dislodge the Ever Given, which has been stuck in the Suez Canal since Tuesday. Their best chance may be on Monday, when a spring tide will raise the canal’s water level as much as 18 inches. Here’s the latest.

The fact that one mishap could sow economic and logistical chaos from Los Angeles to Rotterdam to Shanghai underscored the extent to which modern commerce has come to revolve around global supply chains, our European economics correspondent writes.

China and Iran signed a major agreement that calls for $400 billion in Chinese investments in Iran over 25 years in exchange for oil — a step that could ease Iran’s international isolation.

Prime Minister Narendra Modi is working to rein in India’s relatively new, scrappy, online-focused news outlets like The Wire, The Print, The Scroll and NewsLaundry. The outlets say new government rules will force them to toe Mr. Modi’s line or close their doors.

An explosion shook a Roman Catholic cathedral compound in the Indonesian city of Makassar on Palm Sunday. At least 19 people were wounded, and body parts of a man and a woman presumed to be the bombers were recovered from the blast site. President Joko Widodo said it was an act of terrorism.

With the murder trial of the officer who knelt on George Floyd’s neck slated to begin on Monday, the residents of Minneapolis are at war over public safety and the role of the police.

Democrats have spent the past several years clamoring to raise taxes on corporations and the rich. Now, under President Biden, they have a shot at ushering in the largest federal tax increase since 1942.

The suspect in the mass shooting at a Colorado supermarket came from a family that emigrated from Syria 20 years ago and that had achieved many of the outward signs of success. But their life in America had not been untroubled.

The Pentagon called the first 20 prisoners sent to Guantánamo in 2002 “the worst of the worst.” Just two remain there. Others are spread around the world, including four senior Taliban figures. Our Guantánamo reporter wrote about where they are now.

How The Times covers mass shootings

After a year without a single large-scale shooting in a public place, the U.S. recorded two within six days. An armed man killed eight people, including six of Asian descent, in the Atlanta area on March 16, and 10 people were killed last Monday in Boulder, Colo.

What are the areas of special sensitivity when dealing with victims’ families?

We want to give readers a sense of the human tragedy of the event, so that means calling up loved ones of that person. Making that phone call is never pleasant, but it’s remarkable how often relatives are eager to talk about their loved one and give the public a sense of who that person was after they died in such tragic circumstances. On the other hand, understand that the person is full of grief and may not want to talk to you.

What is something you have learned in your many years of covering mass shootings?

We should not cover a particular mass shooting as though it’s a singular event. We should cover it as part of an American phenomenon that occurs with regularity, and we should try to understand why there are so many of these shootings occurring.

Lemon pudding cakes with sugared raspberries are magical sweets, baking up into two distinct layers from a single, straightforward batter.

What to listen to

Lee Isaac Chung narrates a scene from “Minari,” his Oscar-nominated film about Korean immigrants who move to rural Arkansas.

That’s it for today’s briefing. See you next time. — Carole

P.S. Evan Hill, from our Visual Investigations team, appeared on MSNBC to discuss a new video showing the attack on a police officer who died after the Capitol riot.

The latest episode of “The Daily” is about a nursing home coming out of lockdown. On “Still Processing,” how TikTok is changing pop music.

Sanam Yar contributed to this briefing. You can reach Carole and the team at [email protected].