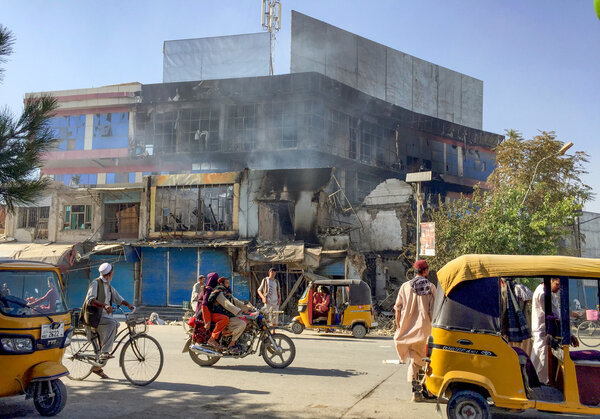 The Taliban seized three Afghan cities yesterday — the commercial hub of Kunduz, Sar-i-Pul and Taliqan, all in the north — in a staggering advance, as government forces struggled to hold the line. Even more populous cities are under siege, a devastating setback for the Afghan government.

The fall of five cities in three days comes just weeks before U.S. forces are set to complete a total withdrawal from Afghanistan, laying bare a difficult predicament for President Biden, who has vowed not to change his plans.

Since the withdrawal began, the Taliban have captured more than half of Afghanistan’s 400-odd districts, according to some assessments. Their recent attacks violate the 2020 peace deal between the Taliban and the U.S., in which the terrorist insurgents committed to not attacking provincial centers like Kunduz.

Propaganda war: The Afghan central government has acknowledged very little of the Taliban’s gain, in an effort to fend off panic and minimize losses.

A strange ending for a strange Olympics

Few athletes attended the Olympics’ closing ceremony on Sunday, a giddy performance in an eerily quiet arena, in front of tens of thousands of empty seats.

Despite challenging climatic conditions and the impact of a year’s delay, world records were shattered in a smattering of sports, including track and field, shooting and swimming.

Eliud Kipchoge of Kenya defended his marathon title, becoming only the third man to win gold medals in back-to-back Games. Overall, the U.S. won the most medals, including the most golds.

Next up: The Paralympics begin on Aug. 24 in Tokyo. And Paris is preparing for 2024.

Coronavirus: Since early July, a total of 436 people connected to the Olympics have tested positive for the coronavirus. And since the Games opened on July 23, daily cases outside the bubble in Tokyo have more than tripled.

China said it would donate two billion Covid-19 vaccine doses to other countries.

Protests against virus restrictions are growing once again.

A number of countries in the Asia-Pacific region are being overwhelmed by their biggest coronavirus waves in months.

Doctors say even children with mild or asymptomatic initial infections may experience long Covid. And for seniors, Covid-19 can come with unexpected symptoms.

Huge wildfires raged for a sixth day yesterday in Greece and nearby Turkey, forcing thousands from their homes and razing vast tracts of forestland. Countries including Britain, Germany and the U.S. have stepped in to help the Greek firefighting effort.

The worst of the fires Sunday were on the island of Evia, which has seen huge sections of pristine pine forests reduced to ash, and on the southern Peloponnese peninsula. The fire risk will remain high for several days, according to the Greek government.

Europe is enduring a protracted heat wave and drought that have created tinderbox conditions. The temperature in central Greece is expected to exceed 41 degrees Celsius, or nearly 106 degrees Fahrenheit, today.

Official response: Kyriakos Mitsotakis, the prime minister of Greece, pledged that victims would be compensated and that destroyed forestland would be regenerated. The immediate priority, he stressed, was to protect human lives and, when possible, property.

Related: Our climate reporter Henry Fountain has been following extreme weather events. Here’s what you should know.

In other climate news:

A long history of bad land use exacerbated the damage of Germany’s recent megaflood. Some say now is the time to rebuild differently.

The Dixie Fire is now California’s second-largest wildfire on record.

A Russian court sentenced Michael Calvey, a prominent American businessman, to a suspended sentence of five-and-a-half years for embezzlement charges. The ruling may hurt Russia’s ability to attract foreign investment.

Liechtenstein, where gambling had largely been illegal until 2010, now has more casinos per capita than Macau or Monaco. Some critics worry that it’s more than the principality can handle.

The R&B singer R. Kelly goes on trial today in Brooklyn to face charges that he ran a criminal enterprise involving the sexual exploitation of children.

A centuries-old tradition in Albania in which some women declared themselves men so they could enjoy male privilege is dying out, as young women have more options available to them.

“It was an escape from the role given to women,” said Gjok Luli, an expert on the region’s traditions, “but there is no desperate need to escape anymore.”

Ernesto Collado is an actor turned fragrance maker, whose workshop sits in a village in the northeast corner of Spain. For him, the masks brought by the pandemic have severed humanity from its sense of smell, writes Nicholas Casey, our Madrid bureau chief, in this dispatch from Spain. Leer en español.

It threatened, too, the future of his smelling tours in his native Catalonia, in which group members get a whiff of sea scents, wild rosemary and the aromatic plant vitex agnus-castus, among other olfactory experiences.

“Smell goes directly to your emotions, you are crying, you don’t know why,” he said. “Smelling has a power that none of the other senses have, and I must tell you now, it is molecular, it goes to the essence of the essence.”

The world lacks authentic scents, Collado said. Popular perfumes, though meant to evoke flowers, are laced with synthetic compounds, while many people are more familiar with artificial vanilla than its natural analog.

“We have never had so many fragrances around us,” he said. “But at the same time, we have no idea of what life really smells like.”

The nutty flavor of this everyday dal comes from split pigeon peas, boiled until tender and bolstered with spices bloomed in hot ghee.

The latest book from the French writer Leïla Slimani, “In the Country of Others,” is modeled on her grandmother’s immigration to Morocco amid its fight for independence.

That’s it for today’s briefing. Wishing you a great start to the week. — Natasha

P.S. Ben Mueller, who has been covering the pandemic from London, is joining the Health and Science desk as a medical reporter.

The latest episode of “The Daily” is about unvaccinated people in the U.S.