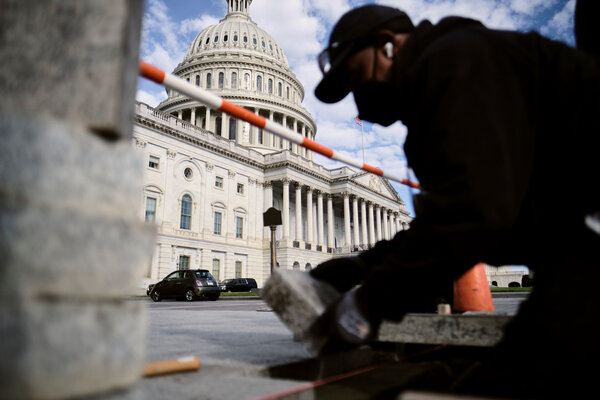 The Senate will today vote on a bill to fund the federal government, which will shut down at midnight if Congress fails to act.

The bill comes as Democrats have tried desperately to salvage President Biden’s domestic agenda. Conservative-leaning holdouts such as Joe Manchin, the West Virginia senator, have dug in against an ambitious $3.5 trillion social safety net and climate bill that the White House calls the Build Back Better plan.

The fate of the plan, and of a $1 trillion bipartisan infrastructure bill that was scheduled for a House vote today, could define the success of Biden’s presidency. The intense negotiations surrounding them have posed a test of his skills as a deal maker, which he highlighted as a calling card during his campaign for the White House.

Shutdown: Senate Republicans are likely to oppose the House-passed bill. But the move signals that Democrats are willing to act on the government funding measure separately, steering clear of a shutdown even as the debt ceiling remains unresolved for now.

Jan. 6 riot: The House select committee investigating the Capitol attack issued 11 more subpoenas yesterday, targeting allies of Donald Trump who were involved in the planning and organizing of the “Stop the Steal” rally that fueled the mob violence.

When a police officer stopped Sarah Everard, a young woman who was walking home in London, and arrested her for breaching national lockdown guidelines in March, she did not argue, instead allowing herself to be handcuffed and getting into the officer’s car. Her charred remains were found a week later in a wood nearly 60 miles away.

These details were heard for the first time yesterday during the sentencing hearing for the officer, Wayne Couzens, who pleaded guilty to her killing earlier this year. The crime horrified Britain, striking a raw nerve with women accustomed to the fear of male violence and in turn galvanizing a national movement demanding better protections.

Couzens had gone hunting for a lone young woman and had used his official police credentials, equipment and training to carry out the crime, a prosecutor said. He had worked on Covid patrols a few months earlier, giving him an understanding of the protocols regarding potential lockdown breaches.

Response: Rights groups reacted with outrage to the new information and called for greater accountability from London’s Metropolitan Police force. Many have criticized the failure by the police to investigate accusations of other sexual offenses by Couzens before Everard’s murder, including reports that he exposed himself in public days before the attack.

Athletes and visitors at the Beijing Winter Olympics next year will face severe restrictions on their movement, organizers said, and a level of control never before seen at the Games.

United Airlines said it would terminate about 600 employees in the U.S. for refusing to comply with its vaccination requirement.

Britney Spears is released from her father’s oversight

A judge suspended Britney Spears’s father from her conservatorship, creating a path to end his legal authority over her finances. At a hearing in Los Angeles, the judge, Brenda Penny, said “the current situation is not tenable” and granted a petition to suspend James Spears’s oversight of his daughter’s $60 million estate. The court named a California accountant as the temporary conservator.

The major decision capped a whirlwind summer in the 13-year conservatorship, after the singer broke her public silence at a hearing in June when she called the arrangement “abusive” and said that she wanted it to end.

In a drastic role reversal at the hearing, James Spears’s lawyer, Vivian Thoreen, argued to end it right away instead of suspending her client, while the singer’s lawyer, Mathew Rosengart, asked the judge to wait in order for him to further investigate James Spears’s conduct.

News From the Americas

More than 20 animals and one plant on the endangered species list are now extinct, U.S. wildlife officials said. A million more species are at risk. Above, ivory-billed woodpeckers filmed in Louisiana in 1935, when the birds were already rare.

Oil prices reached a three-year high, partly because of hurricane damage in the Gulf of Mexico.

In a tiny village on the outskirts of Nacajuca, Mexico, builders are creating new homes using an oversize 3-D printer. One home can be completed in less than 24 hours.

Japan’s governing party elected Fumio Kishida, a former foreign minister and the candidate least likely to stray from the mainstream platform, as its choice for the next prime minister.

The results of Germany’s election, while still too early to decipher completely, illustrate a fragmentation in politics and the growing influence of personalities on voters.

Evergrande made a deal with the Chinese state-owned Shengjing Bank to sell a stake it held for about $1.5 billion, with the proceeds going toward paying down its debts.

The British government is urging nearly one million people who hold a license to drive a heavy goods vehicle back onto the road to address a national shortage of truck drivers. Despite these appeals, some say they are reluctant to return.

The Goncourt prize, France’s top literary award, has come under criticism over charges of conflict of interest after a juror voted to include her partner’s novel in a list of contenders.

A “melting face” emoji, fixed with a content half-smile even as it dissolves into a puddle, is one of 37 new emojis approved this year by the Unicode Consortium.

Seemingly every young person in the U.S. is watching “The Sopranos.”

The show’s new audience, often openly left wing, differs from its forebears of pasta-eating mob movie aficionados. The new audience sees something different in the show, too: a parable about a country in terminal decline.

Some of the earliest stories about kites date back to around 2,000 years ago, when they were used in military warfare by Chinese armies, as tools to plan out attacks, scare off foes and deliver propaganda — or threats.

Today, these delicate aircraft — built from light wood or wire frames shaped to create lift, covered in a thin material such as paper or silk and piloted via long strings — are considered toys. And yet they have captivated adults and children alike for centuries, serving a range of practical and spiritual functions in cultures around the world.

One such artist, from Kärnten, Austria, is Anna Rubin, whose surreal bamboo-and-paper creations are designed, she says, to resemble “things that shouldn’t be flown on a kite,” including coal-black meteors and jute carpets, whose frayed edges make them look like soaring sunbursts of grass. “Everyone should, once in their life, make a kite and fly it,” she says.

Read more about the joy of kites.

The eggs in this spicy, tomato-rich curry can be cooked to be as firm or as jammy as you like.

Treat yourself to one of these 14 new books coming out in October.

In its best moments, “No Time to Die,” the 25th Bond film, feels like a throwback and an update, reprising the Bond tradition of elegance, charm and high silliness.

That’s it for today’s briefing. I’m away tomorrow, but my colleague Amelia Nierenberg will keep you up-to-date with the latest news. — Natasha

P.S. Katrin Bennhold, our Berlin bureau chief, appeared on Amanpour on CNN to talk about the legacy of Angela Merkel, Germany’s chancellor, who is preparing to leave office after 16 years.

The latest episode of “The Daily” is about Britney Spears.