We’re covering an Indian virus study that could offer key insights for other countries, global reactions to chaos in the U.S. presidential debate and how it feels to be back at the theater. 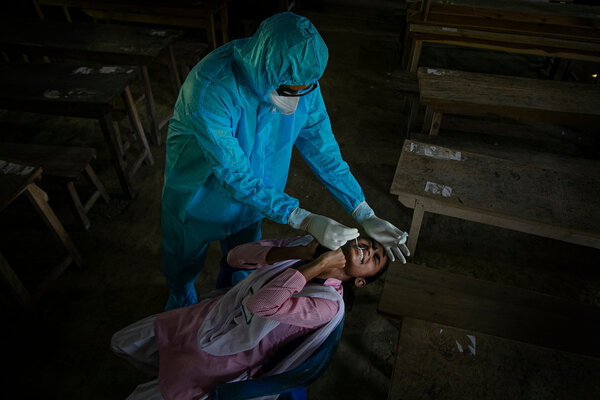 An ambitious new study of nearly 85,000 coronavirus cases in India and nearly 600,000 of their contacts offers important insights not just for India, but for other low- and middle-income countries.

The study, published Wednesday in the journal Science, found that children of all ages can become infected with the virus and spread it to others, and that older men are more likely to be index cases — those who seed infections.

Among the other findings: The median hospital stay before death from Covid-19 was five days in India, compared with two weeks in the U.S., possibly because of limited access to quality care in India. And the trend in increasing deaths with age seemed to drop off after age 65 — perhaps because Indians who live past that age tend to be relatively wealthy.

Quotable: “The claims that children have no role in the infection process are certainly not correct,” said an epidemiologist who led the study.

North Korea has discovered “faults” in its anti-epidemic measures, its state news media reported on Wednesday. A report said that officials had displayed “carelessness, irresponsibility and slackness.”

Early clinical trials are complete for a second Russian vaccine, a health official said Wednesday, moving it closer to registration under the Russian approach of approving vaccines for emergency use before beginning late-stage trials.

South Korea said on Wednesday that it would impose a fine of up to $85 on anyone caught without a mask in high-risk areas like outdoor gatherings and public transportation, starting on Oct. 13.

The world watches America in chaos

The first televised debate between President Trump and former Vice President Joseph R. Biden Jr. left allies and rivals alike questioning the state of American democracy and the country’s place on the global stage. Our diplomatic correspondent looked at reactions around the world.

People voiced frustration, disbelief and even glee over Mr. Trump’s blustering and bellowing, which he directed both at the moderator and at Mr. Biden. Mr. Biden called Mr. Trump a “clown” and asked him to “shut up.”

Hu Xijin, the editor of The Global Times, a Communist Party paper, wrote: “Such a chaos at the top of U.S. politics reflects division, anxiety of U.S. society and the accelerating loss of advantages of the U.S. political system.”

Some mourned the loss of decorum. “Most people in Japan would be dismayed by the mudslinging style,” said a professor of American Studies at the University of Tokyo.

Analysis: Mr. Trump’s insistence that voting would be tainted by fraud was a stark reminder that the most direct threat to the integrity of the electoral process now comes from the president himself.

Protests erupt in India after another rape victim dies

A 19-year-old woman from a north Indian village who was dragged from a field, mutilated and raped by a group of men in Uttar Pradesh two weeks ago died of her injuries on Tuesday, sparking nationwide outrage and calls for justice.

The gruesome case is the latest example of sexual violence against women in the country. The woman was Dalit, the lowest caste in India’s Hindu hierarchy and so particularly vulnerable to discrimination and violence. Her attackers were reportedly of a higher caste.

On Monday, she was transferred to a hospital in New Delhi, where Dalit protesters clashed with the police. Scrutiny of the police has grown after her family said that officers seized and cremated the victim’s body in the middle of the night, over their objections.

Arrests: The police said four men were in custody. Yogi Adityanath, the chief minister for Uttar Pradesh, said on Wednesday that he ordered a special investigation team to handle the case and that it would be tried in a fast-track court.

Context: Of the tens of thousands of rape cases reported in India annually, only a handful result in prosecutions, National Crime Records Bureau figures show. Activists say the true scope of the problem is far worse, as many cases are never reported because of the stigma of sexual violence in India.

If you have 10 minutes, this is worth it

As the coronavirus was spreading in Europe in late February, Americans, Britons, Germans and others converged to ski in the famed resorts of the Austrian alps. They took the virus with them when they went home — to more than 40 countries on five continents.

Nine months into an outbreak that has killed a million people worldwide, our reporters looked at how in one resort, Ischgl, the era of accessible global tourism collided with a pandemic.

Fukushima disaster ruling: A high court ordered the Japanese government and the operator of a power plant to pay $9.5 million in damages to survivors of the 2011 nuclear accident. It was the first court at that level to hold the state responsible.

Ayodhya mosque verdict: A court in India has acquitted all those who were accused of demolishing a centuries-old mosque in the northern Indian city of Ayodhya in 1992, including several high-profile politicians from Prime Minister Narendra Modi’s party. The case is likely to sow insecurity among the country’s Muslims.

China poisoning sentence: A court in central China has sentenced a kindergarten teacher to death for poisoning 25 pupils, one of whom died, after a dispute with a colleague. The teacher, Wang Yun, added nitrite to porridge that was fed to the other instructor’s class for breakfast in March 2019.

Rio Tinto mine: Residents of the Papua New Guinea region have accused the mining giant, which is based in Britain and Australia, of environmental and human rights violations and asked Australia to investigate. The claim: that an abandoned mine is leaking waste and poisoning rivers on the island of Bougainville.

Snapshot: Above, “Sleepless: A Musical Romance,” at Troubadour Wembley Park Theater in London. Cautiously, theater is creeping back. Our reporter asked artists and audiences around the world — even an usher and a critic — to reflect on what it’s like to return.

What we’re reading: This home tour through a dog’s eyes in The New Yorker. This will send you off into your day with a smile, and maybe remind you to pet your dog a little more.

Cook: A relatively easy recipe for pork chops by the cookbook author Toni Tipton-Martin. The pork is dressed in a glossy sauce made of capers, parsley, lemon and butter, taking it from a simple to elegant weeknight meal.

Watch: We’ve got a list of the best TV shows and movies new to Netflix, Amazon and Stan in Australia for October. Our picks include “Rebecca,” “The Haunting of Bly Manor” and “Welcome to the Blumhouse.”

At Home has our full collection of ideas on what to read, cook, watch, and do while staying safe at home.

We asked New York Times readers about the tiny details of their days during the pandemic. Some kept log books — where they went, whom they saw, what they ate and what they did — and their notes, taken together, offer a series of snapshots of everyday life during this unusual time. Here’s a bit of what they told us, and you can read more here.

A taxi arrived at the door this morning with a gift of fresh banana leaves from our friend Nora, so that I can line a pot with them for making barbacoa de pollo later today. — Thad Mummert, 74, Oaxaca de Juárez, Oaxaca, México

We’re at the hospital to train staff on Covid-19 infection, prevention and control. Staff are slowly, slowly arriving to the training site. Thousands of dragonflies are flitting about the courtyard. — Emily Guebert, 29, Aweil, South Sudan

Locked eyes with a stag standing just beyond the patio in the backyard while on Zoom with my boss’ boss. Made the fancy boxed pasta for dinner. — Morgan Shockley, 30, Arroyo Seco, N.M.

P.S.
• As we noted above, the latest episode of “The Daily” is about the chaos and contempt surrounding the first U.S. presidential debate. We’re also listening to Kara Swisher’s conversation with Elon Musk on the latest episode of her “Sway” podcast for Times Opinion.
• Here’s our Mini Crossword, and a clue: Rhythm instruments (five letters). You can find all our puzzles here.
• Emily Schmall, formerly a South Asia correspondent for The Associated Press, is joining our New Delhi bureau.

Tags: Briefing, Thursday, Your
You may also like
Recent News:
This website uses cookies to improve your user experience and to provide you with advertisements that are relevant to your interests. By continuing to browse the site you are agreeing to our use of cookies.Ok