Good morning. We’re covering a vaccine stockpile that’s become a flash point with the E.U., and protesters in Myanmar building an armed resistance. 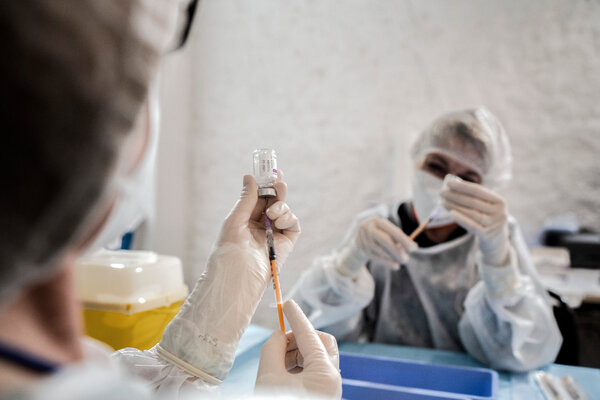 A new flash point over vaccines

Italian authorities found a stockpile of 29 million doses of AstraZeneca’s Covid-19 vaccine languishing in a factory near Rome. The discovery of so many doses raised suspicions that the pharmaceutical company was trying to find a way to export them to Britain or elsewhere.

The European Union has demanded that AstraZeneca fulfill its promises of deliveries to the E.U. The bloc is finalizing emergency legislation that would give it the power to restrict exports of vaccines for six weeks to ease supply shortages.

The new rules will make it harder for pharmaceutical companies producing vaccines in the E.U. to export them and are likely to disrupt supply to Britain.

Details: Authorities went to the site after receiving an alert from the European Commission, which found a discrepancy between what the company said it was producing in E.U. facilities and what the facilities themselves were reporting.

The numbers: The European Union was meant to receive more than 100 million vaccine doses from AstraZeneca in the first quarter of this year, but has received only 16.6 million — a supply shortage that has derailed vaccination efforts across the continent.

Hong Kong suspended use of the Pfizer-BioNTech vaccine after packaging defects ranging from cracked containers to loose caps were discovered in one batch of doses. Health officials called it a precaution.

Chancellor Angela Merkel scrapped an unpopular plan to shut down the German economy for two extra days over the Easter holidays as her government faces anger over its chaotic response to a resurgence of the coronavirus.

Another stalemate in Israel?

With 90 percent of the votes counted from parliamentary elections, Prime Minister Benjamin Netanyahu’s right-wing alliance had 52 seats, while his opponents had 56 — both sides several seats short of the 61 needed to form a coalition government with a majority.

If those counts stand, they could prolong by months the political deadlock that has paralyzed the country for two years. The election on Tuesday was Israel’s fourth in two years. Final results are expected on Friday. Partial tallies suggest that both contenders would need the support of a small Arab party, Raam, to form a majority coalition.

Time for change: Israeli commentators and analysts were locked in debate about changes to the electoral system that could break the deadlock. But for some, the impasse is rooted in more profound fissures that divide society, splits that have contributed to the political fragmentation.

An armed resistance rises in Myanmar

As the nation’s military kills, assaults and terrorizes unarmed civilians each day, some protesters say there is no choice but to fight the army on its own terms. So groups of students, activists and office workers have mobilized with weapons into a kind of guerrilla force.

As protesters in the cities build barricades to protect neighborhoods from military raids and march on, the forces in the forests are training in basic warfare techniques and plotting to sabotage military-linked facilities.

The boldness and desperation of the new front are a response to the military’s ruthless crackdown, with 275 people killed. Security forces have fired at bystanders, ambulances and tortured detainees. Dozens of young protesters have been killed by single gunshots to the head.

How it looks: The frontline fighters have piled up sandbags and built bamboo barricades, which they defend with homemade firebombs. In some cases, they have the backing of ethnic insurgencies that have for years been targeted by the Tatmadaw, as the military is known.

Quotable: “We have to attack them back,” said a woman from Yangon who was in the forest for a week of boot camp. “This sounds aggressive, but I believe we have to defend ourselves.”

The Suez Canal was blocked after an enormous container ship ran aground during a sandstorm. More than 100 ships on Wednesday were stuck at each end of the canal, which carries roughly 10 percent of worldwide shipping traffic.

North Korea conducted a test of two short-range cruise missiles over the weekend, its first such test under the Biden administration. The missile test was not in violation of United Nations resolutions.

Organizers are pressing ahead with plans to hold the Tokyo Games this summer, but the event could become a trial from which Japan may take years to recover. Epidemiologists warn that the Olympics could become a superspreader event, and polls show most of the Japanese public think the Games should be postponed.

Owners and employees at the spas attacked in Atlanta last week were immigrants with similar dreams, but were separated by a vast gap in money and power. Our reporters looked at the disparities.

Two back-to-back mass shootings have people once again asking the question: Why does the U.S. have so many? An ever-growing body of research consistently reaches the same conclusion: the astronomical number of guns, our columnist writes.

It began as a response to the pandemic: A temporary policy allowed American museums to sell art from their collections to help cover operating costs. Now museums across the country are debating whether to keep the measure.

The old guidelines, from the Association of Art Museum Directors, allowed museums to sell items if they no longer fit an institution’s mission and if the proceeds went to buy other art, not to pay staff salaries or other bills.

Museums that favor keeping the new arrangement say it’s necessary for their long-term survival. “It’s misinformed to think that every museum has a board full of billionaires,” said Anne Pasternak, director of the Brooklyn Museum. During the pandemic, the Brooklyn Museum has raised nearly $35 million at auction sales.

Last month, even the Met — the largest art museum in the U.S. — said it might sell items to help underwrite the salaries of staff members involved in collection care.

Those opposed to these sales argue that they undermine the mission of these museums. “If you want to flip paintings, there are many other types of institutions where you can do that,” Erik Neil of the Chrysler Museum of Art in Norfolk, Va., told The Times. “And they are called commercial galleries.”

Pollo en fricasé features bone-in chicken thighs and potatoes. Like so many Puerto Rican dishes, this one is highly adaptable.

Sharon Stone writes about her life and her brushes with death in a new memoir. Read a Q&A.

A new study suggests that too much high-intensity exercise may be bad for your health.

The documentary “Seaspiracy” takes viewers on a voyage around the world rooting out the many causes of ocean life decimation.

P.S. Priya Krishna is joining The New York Times as a Food reporter.

The latest episode of “The Daily” is about Joe Biden’s 30-year quest for gun control in the U.S.

Sanam Yar contributed to this briefing. You can reach Melina and the team at [email protected].