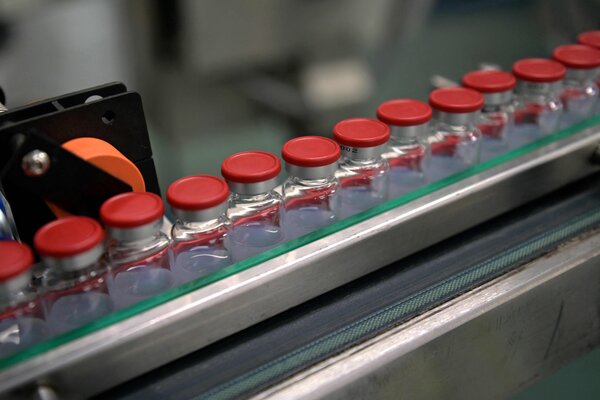 The Biden administration said yesterday that it would support lifting patent protections on Covid vaccines, a breakthrough for efforts to produce more doses globally. “The extraordinary circumstances of the Covid-19 pandemic call for extraordinary measures,” Katherine Tai, the U.S. trade representative, said in a statement.

The U.S. had opposed a proposal at the World Trade Organization to suspend intellectual property protections in an effort to ramp up vaccine production. But its new support, made under growing pressure as the pandemic rages in India and South America, is no guarantee that a waiver will be adopted. The E.U. has also been standing in the way.

Response: The pharmaceutical industry responded to the decision with anger. The president of the Pharmaceutical Research and Manufacturers of America called the announcement “an unprecedented step that will undermine our global response to the pandemic and compromise safety.”

Good news: The German company CureVac’s new RNA vaccine, which could be ready next month, does not require that doses be kept in a deep freezer, like the Pfizer and Moderna vaccines. That means it could more easily deliver the power of RNA vaccines to hard-hit parts of the world.

Nepal’s growing coronavirus outbreak has spread to the Himalayas, with an increasing number of climbers on Mount Everest testing positive.

Hong Kong said that regular flights from Britain would resume on Friday, allowing hundreds of residents stranded since December to return home.

In Britain, more than one in five adults experienced some form of depression during the strict lockdown earlier this year, according to the government statistical agency.

Isabel Díaz Ayuso, a conservative politician dubbed a “Trumpista” by her opponents, won election as Madrid’s regional leader by a landslide after she refused to shut down the capital’s bars and shops.

Russia has withdrawn just a few thousand troops from the border with Ukraine — far fewer than it had initially signaled, Biden administration officials said. Many of those units left their trucks and armored vehicles behind, ready to return if President Vladimir Putin decided to deploy them again.

Senior Defense Department officials said that close to 80,000 Russian troops remained, the biggest force Russia has amassed there since annexing Crimea in 2014.

Biden administration officials said they saw the Russian military presence as a message from Moscow that it could match the number of troops taking part in a NATO military exercise in Europe, which officially began yesterday.

U.S. agenda: Secretary of State Antony Blinken arrived early this morning in Kyiv, the Ukrainian capital, where he will reassure the Ukrainian president of America’s support against Russian hostility, even as he renews American calls for change in Ukraine’s notoriously corrupt political system.

The E.U. took steps yesterday to limit competition from China that it considers unfair, with proposed regulations that would allow it to investigate and take measures against foreign companies that used government subsidies to get an advantage over competitors within the bloc.

A separate proposal, also announced Wednesday, is intended to make Europe less dependent on China for crucial goods like semiconductors, drugs and batteries.

Stormy relations: Work on completing an investment deal years in the making between the bloc and China was “suspended” this week, the E.U. trade chief said. Europe’s tougher line toward China brings it more in line with the Biden administration.

Both the Scottish National Party, led by Nicola Sturgeon, above left, which is pushing for Scottish independence, and Prime Minister Boris Johnson’s Conservative Party stand to make gains in regional and local elections in Britain today.

A French journalist who disappeared in Mali last month said in a video yesterday that he had been kidnapped by a jihadist group and appealed for help from the authorities in France.

Two American men were sentenced to life in prison for the street-corner killing of an Italian military police officer.

A Belgian farmer, apparently frustrated by a 200-year-old stone border marker, dug it out and moved it about seven feet into French territory, thus slightly enlarging Belgium.

Clashes in Colombia between the police and people protesting poverty and inequality have killed at least 24. Protesters attacked the country’s Congress yesterday.

Yair Lapid, a centrist Israeli politician and former media celebrity, has 28 days to form a governing coalition after Prime Minister Benjamin Netanyahu failed to do so.

A company-appointed panel ruled that Facebook’s barring of Donald Trump was justified at the time of the Capitol riots but added that the company should reassess the decision in six months. Nick Clegg, the former British deputy prime minister, has shaped the company’s handling of Trump at every turn.

U.S. births declined for a sixth straight year in 2020 as the pandemic accelerated a trend that had been building for the last decade.

Using DNA analysis, researchers have for the first time identified the remains of a sailor from the doomed 1845 Franklin expedition to the fabled Northwest Passage.

New studies show that cutting emissions would most likely halve the contribution of melting ice to rising oceans this century. Missing the Paris agreement targets for limiting warming could lead to a tenfold increase in the sea-level contribution from Antarctica alone.

Emmanuel Macron, the French prime minister, charted a delicate course between condemnation and celebration on the 200th anniversary of Napoleon Bonaporte’s death, describing the emperor’s restoration of slavery in 1802 as a “mistake, a betrayal of the spirit of the Enlightenment.”

That painful history has tended to be eclipsed for many by Napoleon’s epic magnetism. Macron continued, “Without him the destiny of France would not have been the same.”

The art of the Oval Office

The paintings and the sculptures that are displayed in the Oval Office represent the choices of each American president — subtle and not-so-subtle signals every administration sends about its values and view of history. Take a look.

President Biden’s selection of a large portrait of Franklin D. Roosevelt to hang above the fireplace is a break from his predecessors, who gave George Washington the prominent spot; Donald Trump’s decorative choices reflected his admiration for Andrew Jackson; Barack Obama sought to modernize the office, bringing in paintings from the Whitney Museum in New York.

“The Oval Office decoration often reflects a president’s view of history and the nature of his hopes for the future,” said Jon Meacham, the presidential biographer whom Biden asked to advise on art for the Oval Office.

He added: “Presidents have a unique place, not only as an object of the historical imagination, but as an architect of it. And so to catalog and take a look around the virtual attic of the Oval Office through the years tells you a lot about what presidents value — not only the stories they are interested in, but the stories they are writing themselves.”

Pair fresh fettuccine with asparagus, smoked salmon and a shallot cream sauce with this account of (scientific) pasta pursuits at Carnegie Mellon University.

Power up your to-do list with the free task-reminder feature on your phone. Here’s how to make the most of it.

Take five minutes to fall in love with choral music.

Here’s today’s Mini Crossword, and a clue: Animal that can drink over 30 gallons of water at a time (five letters).

That’s it for today’s briefing. Have a peaceful Thursday. — Natasha

P.S. The Times announced its first-quarter earnings and now has a total of 7.8 million subscribers.

The latest episode of “The Daily” is about the low birthrate in Japan.