We’re covering China’s worst outbreak in a year and skirmishes on the border between Lebanon and Israel. 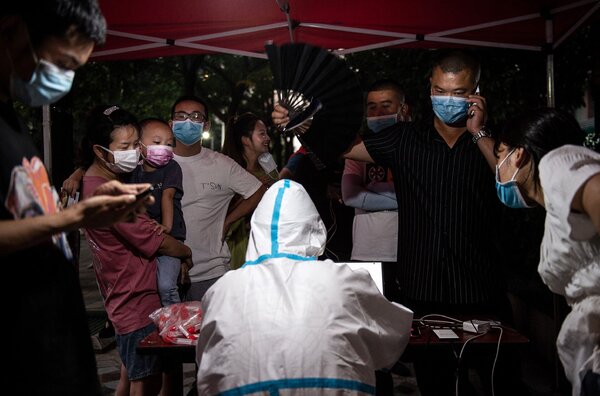 Months after China was hailed as a success story in curbing the coronavirus, the country is facing its biggest challenge since the virus first emerged in Wuhan: The highly infectious Delta variant is now rapidly spreading.

The government has resorted to strict lockdowns and aggressive testing, even barring people in some cities from leaving their homes, but Chinese officials have acknowledged that stamping out this outbreak will be much harder than in the past. So far, the virus has spread to 15 of the 31 provinces and autonomous regions in China.

Yanzhong Huang, a senior fellow for global health at the Council on Foreign Relations, said China’s “containment-based” strategy would not work in the long run, particularly as new variants continued to emerge. “It will become extremely costly to sustain such an approach,” he said.

Context: Part of the challenge for Beijing is that the Chinese-made vaccines being used to immunize the country are not as effective against the Delta variant as other shots.

The World Health Organization called for a moratorium on booster shots until the end of September to address global disparities in vaccination rates.

Japan warned that coronavirus infections were surging at an unprecedented pace as new cases hit a record high in Tokyo, Reuters reports.

Pakistan surpassed one million vaccinations per day for the first time since the pandemic began.

Barack Obama has canceled his 60th birthday party because of concerns about the spread of the Delta variant.

In an Olympic scandal reminiscent of the Cold War, the Belarusian sprinter Kristina Timanovskaya refused an order to return home and defected, departing Tokyo on a flight to Vienna en route to Poland, which offered political asylum to her and her husband.

Her defection, which came after she criticized her coaches for registering her for an event she hadn’t trained for, shed light on a dictatorship where no sphere of life can evade politics. President Aleksandr Lukashenko, who has led Belarus for 27 years, has long used sports as a propaganda tool, leading athletes to fear reprisal at any sign of dissent or poor performance.

Quotable: “I can argue that with a very high degree of probability that she would be sent to prison, tortured, deprived of sleep and would not be given food and water,” said Aleksandr Opeikin, who leads an organization that opposes the government.

Here’s the latest from the Games:

The formidable team of skateboarders from Japan took the gold and silver medals in the women’s park competition.

So far, Tokyo has been a field of disappointment for India, which has won only one gold medal in recent decades. Some athletes say the weight of the nation’s expectations has been crushing.

Israeli forces responded to rocket fire from Lebanon with artillery strikes on Wednesday. No injuries were reported on either side.

No one had claimed responsibility for the rocket fire, but similar recent attacks were attributed to Palestinian militants based in southern Lebanon. It was the second rocket attack in two weeks.

Israel’s military has been locked in a standoff for years with Hezbollah, an Iran-backed Lebanese Shiite military.

Building tensions: There are expectations that Israel may soon retaliate for a deadly attack on an Israeli merchant ship in the Indian Ocean last Friday. Israel blamed Iran for that attack. On Tuesday, an Emirati merchant ship was boarded by Iranian gunmen off the Emirati coast, according to The Associated Press.

Related: In the year since a major explosion shook Beirut, Lebanon’s economy has collapsed, leading to shortages of food, fuel and medicine.

The Taliban claimed responsibility for an attack on the home of the acting defense minister in Kabul, with a spokesman describing the raid as “the beginning of retaliatory attacks.”

What else is happening

Farmers in Western Canada are scrambling to sell some or all of their cattle in an effort to save them from a record drought.

Haiti’s prime minister said he believed the mastermind behind the assassination of President Jovenel Moïse was most likely still at large.

At least 40 bodies have washed up on a riverbank in Sudan in the past week. Aid workers believe they were victims of atrocities in the war raging in the Tigray region of Ethiopia.

Thousands of people were forced to flee their homes in Greece as a large wildfire tore through an area north of Athens, fueled by drought and a searing heat wave.

Climate change is threatening some emperor penguin colonies with extinction, according to U.S. wildlife officials who announced a proposal to protect them.

The high country of southern Australia can make for a beautiful hike. But it’s also unpredictable. Many hikers have vanished in mysterious circumstances over the years. “Darkness plays funny games,” a local farmer said. “That’s why you keep the fire going all night.”

Architecture that changed the world

What are the most significant works of postwar architecture? T Magazine asked architects, designers and journalists to make a list of 25 important buildings constructed since World War II. The goal, Kurt Soller writes, was to surface work that “had not only reshaped the world and era in which it was introduced but also has endured and remains influential today.”

Top off this pie’s toasted cornflake crust and honey-sweetened pudding with juicy plums.

Five minutes that will make you love Igor Stravinsky.

That’s it for today’s briefing. See you next time. — Melina and Matthew

The latest episode of “The Daily” is about the situation in Tunisia.

Sanam Yar wrote the Arts and Ideas. You can reach Melina, Matthew and the team at [email protected].