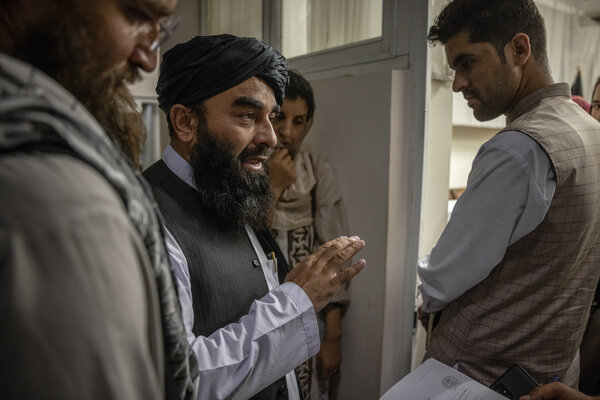 The Taliban outlines life under their rule

In his first sit-down interview with a Western media outlet since the Taliban took full control of Afghanistan, Zabihullah Mujahid — seen as likely to be the future minister of information and culture — said the group wants to “forget what happened in the past” and rejected widespread fears that the Taliban are already exacting vengeance.

Concerns that the Taliban would once again force women to stay in their homes or cover their faces are baseless, he said. He added that the requirement that women be accompanied by male guardians applied only to journeys of three days or longer, not to trips to school, the office, a university or the hospital.

He also offered assurances to Afghans trying to leave the country, saying — contrary to reports based on his news conference on Tuesday — that those with valid travel documents would not be prevented from entering the airport.

Quotable: Mujahid did confirm that music would not be allowed in public. “Music is forbidden in Islam,” he said, “but we’re hoping that we can persuade people not to do such things, instead of pressuring them.”

Evacuations: U.S. and allied planes flew an additional 19,200 people out of Kabul in the past 24 hours, but more than 10,000 people were still inside the international airport awaiting flights out of the country. A new estimate from the Association of Wartime Allies released on Wednesday concluded that at least 250,000 Afghans could be eligible for expedited immigration status. Here are the latest updates.

The U.S. embassy warned of a threat at the airport in Kabul, telling citizens to “leave immediately” and citing three gates as being of particular concern.

An Islamic State affiliate that is a sworn enemy of both the Taliban and the United States threatens a large-scale attack against the mission at the airport.

Chancellor Angela Merkel of Germany called for talks with the Taliban to preserve progress made for Afghans.

In Afghanistan’s Panjshir Valley, a budding resistance to the Taliban faces long odds.

In his first interview with a news organization since his arrest in January, the Russian opposition leader Aleksei Navalny talked about his life in prison, why Putin has cracked down so hard on the opposition and his conviction that a democratic Russia will emerge.

The experience is mostly “psychological violence,” Navalny wrote in a 54-page exchange with The Times. The most maddening thing, he suggested, is being forced to watch Russian state TV and selected propaganda films for more than eight hours a day.

Yet Navalny was upbeat about Russia. “The Putin regime is an historical accident, not an inevitability,” he wrote. “Sooner or later, this mistake will be fixed, and Russia will move on to a democratic, European path of development. Simply because that is what the people want.”

Strategy: Navalny said that Putin cracked down on his group and other opponents out of concern that he would lose a majority in the Duma, Russian Parliament’s lower house, in upcoming elections.

Quotable: “Opposition exists in Russia not because Aleksei Navalny or somebody else commands it from a headquarters,” Navalny said, “but because about 30 percent of the country — mostly the educated, urban population — doesn’t have political representation.”

Experts studying the origins of the coronavirus for the W.H.O. cautioned that the inquiry had “stalled” and that further delays could make it impossible to recover crucial evidence about the beginning of the pandemic.

“The window is rapidly closing on the biological feasibility of conducting the critical trace-back of people and animals inside and outside China,” the experts wrote in an editorial in the journal Nature.

“We were getting a little concerned that there really is virtually no debate about the bulk of the recommendations that are not related to the lab hypothesis, and of course there’s a lot of discussion of the lab story, particularly coming from the U.S.,” one of its co-authors said.

In other virus news:

New case reports are leveling off globally despite the U.S. surge, the W.H.O. says.

In Florida, the pandemic is worse now than it has ever been before.

Johnson & Johnson finds that a second dose of its vaccine provides a strong boost.

Covid-19 is more likely to cause myocarditis than the Pfizer-BioNTech vaccine is, according to a new study from Israel.

Experts say the U.S. is falling short on its pledge to be the world’s vaccine “arsenal.”

Nineteen-year-old Zara Rutherford flew out of Belgium last week, planning to return on Nov. 3 as the youngest woman to fly solo around the world.

A plan for a $218 million coal mine in northwest England is stirring hopes and fears.

Business leaders are calling for a relaxation of Brexit visa rules to address a supply chain crisis, The Guardian reports.

2020 was Europe’s hottest year on record “by a considerable amount,” CNN reports.

International brands signed a new accord to protect garment workers in Bangladesh.

Fashion was seen as a way forward for Afghanistan and its craftspeople, especially women, but those involved are terrified it may turn them into targets.

Only 6 percent of board seats at Japanese companies are held by women, and after years of unkept promises, these businesses are facing pressure to diversify.

The trendy eyewear brand Warby Parker, which is growing quickly and losing money, has filed for a direct listing on the New York Stock Exchange.

In Birmingham, England, artisans worry that luxury apartments and trendy cafes may push them out of an area where jewelers have been centered since the 18th century.

Federer’s performance in this domain has been every bit as impressive as his performance on court. Perhaps even more so when you consider the disadvantage he started with — his home country is wealthy but small, which hampered his appeal to potential sponsors at the beginning of his career.

Considering the achievements of Novak Djokovic and Rafael Nadal, it’s debatable whether he’s even the greatest player of this era. What is undeniable, though, is that no tennis superstar has ever built a financial empire comparable to Federer’s, and that this might well be his most enduring legacy, Christopher Clarey writes in The Times Magazine.

The French have a fine expression that applies to Federer: “joindre l’utile à l’agréable,” which translates loosely as “combining business with pleasure” but is actually broader in scope, encompassing the tasks of daily life. His impeccable strategic instincts, along with the sort of personality that might be more suited to a boardroom or a political campaign than to a sports arena, all combine to make Roger Federer the greatest player-mogul the tennis world may ever see.

In “The Sisters of Auschwitz,” a best seller in the Netherlands for more than two years, Roxane van Iperen writes about the way Janny and Lien Brilleslijper staged their own form of resistance to the Nazis.

Exercise may help keep our memory sharp and reduce the risk of dementia.

That’s it for today’s briefing. Thanks for joining me. — Whet

P.S. The Times won an Edward R. Murrow Award, honoring outstanding achievements in broadcast and digital journalism, for work from the Video team.

The latest episode of “The Daily” is on the race to evacuate Kabul.

You can reach Whet and the team at [email protected].