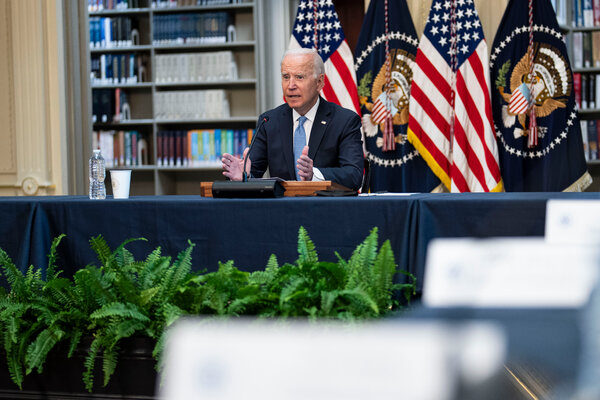 The U.S. and Britain will share technology to help Australia deploy nuclear-powered submarines that could have a range extending across the Pacific, challenging China’s territorial claims in the region.

The plan could result in Australia conducting routine sail patrols through areas of the South China Sea that Beijing now claims as its own, and reach as far north as Taiwan.

The announcement is a major step for Australia, which until recent years has been hesitant to push back directly at core Chinese interests. But Australia has felt increasingly threatened, and three years ago was among the first nations to ban Huawei, the Chinese telecommunications giant, from its networks.

U.S. officials said Australia had committed never to arm the submarines with nuclear weapons; they would almost certainly carry conventional, submarine-launched cruise missiles, a military presence that could still alter the balance of power in the region.

A Chinese court rules against a #MeToo case

Zhou Xiaoxuan said she would keep fighting after a Beijing court ruled she had not provided enough evidence in her sexual harassment case against a star TV presenter.

“Ultimately, the court didn’t give us any space for making a statement,” she said in a 10-minute statement that wavered between resignation and defiance. A small crowd applauded Ms. Zhou, with some shouting, “Keep going.”

Zhou, a former intern who became a prominent voice in China’s #MeToo movement, said a C.C.T.V. presenter named Zhu Jun had assaulted her in a dressing room four years earlier. Zhu denied that accusation and sued Zhou, and she countersued him. Their legal battles became a focal case in China’s expanding movement against the sexual coercion of women.

The Chinese Communist Party has moved to rein in public protest and contention over women’s rights. State news outlets were ordered not to cover Zhou’s lawsuit, according to three journalists who received the instructions and asked for anonymity because of the risk of repercussions.

Navalny’s allies campaign from outside Russia

Five allies of Aleksei Navalny have been engineering an election shake-up from an undisclosed location outside Russia that they hope will put dozens of Kremlin critics in Parliament.

They want to use the parliamentary election, which runs from Friday to Sunday, to undermine President Vladimir V. Putin’s ruling United Russia party — even though just about all Navalny supporters are banned from getting on the ballot.

The strategy hinges on a “Navalny” smartphone app, which suggests an opposition candidate to vote for in each of the country’s 225 electoral districts. The chances are slim, but electing even a few dozen opposition lawmakers “creates turbulence in the system,” one Navalny ally said.

The odds: United Russia is almost certain to retain its majority in the lower house of Parliament, the Duma, because half of the 450 seats are apportioned by party list. The ruling party is sure to get the most votes, and Russian elections are rife with fraud.

The team: The Navalny allies are in exile because of the threat of lengthy jail sentences. They have been consulting polling data, dozens of regional experts and reports from the ground to determine the person best positioned to defeat the United Russia candidate in each district.

As Hong Kong’s crackdown on dissent has grown, authorities have focused in on a new target: chocolate. Officials suggested that imprisoned pro-democracy activists are using sweets to “solicit followers” behind bars.

The Chinese property giant Evergrande told major banks that it wouldn’t be able to make interest payments due on Sept. 20, Bloomberg reported.

California’s Democratic governor, Gavin Newsom, handily won a recall election and will remain in his position.

Israeli researchers reported on Wednesday that a third dose of the Pfizer vaccine can enhance protection in adults older than 60 for at least 12 days. But experts said the data was limited and the benefits were unclear.

The E.U. announced a new agency to combat future pandemics.

Our reporter visited rural Afghanistan, where the remnants of war are everywhere — pillaged outposts and skeletons of burned-out police pickup trucks. But for the first time in years, the shooting has stopped.

Lives lived: The Rev. Cho Yong-gi, founder of one of the world’s largest megachurches, died in Seoul on Tuesday. He was 85. He is credited with fueling the explosive growth of Christianity in South Korea.

Afghan women who have sought refuge in America talked to In Her Words. Below is an excerpt.

Farahnaz, 28, arrived in the U.S. in February

As a TV journalist, I went to cover the peace negotiations with the Taliban in Doha, Qatar, last October. When I was there, I interviewed Suhail Shaheen, the spokesman for the Taliban. I spoke to him without covering my hair and he was very uncomfortable — it was unintentional but that encounter became big news.

After the peace talks, the Taliban started targeting and assassinating journalists. A couple of my colleagues were killed, and I was told that I was also on the Taliban’s hit list. Security forces told me to stay at home and stay low. Those few days hiding in Kabul were the most difficult days of my life. I have never felt fear like that. When it was a little safer, I went to the French Embassy to get a visa and left Kabul immediately.

The day that Kabul fell to the Taliban, I shaved off all my hair. I was at my friend’s house watching the news and I was just heartbroken and needed to do something. I watched the Taliban go to the Tolo TV studio, and I couldn’t help but think that the same people who killed so many of my colleagues were sitting in the same studio where I used to work every day with my colleagues. Now the Taliban have taken over the streets of Kabul — the same streets where we, my generation, worked, protested and made music and art.

A woman’s life in Afghanistan has never been easy — not even during the last 20 years. The women of Afghanistan don’t need your sympathy, they need the world to take responsibility for the mess it created.

Store-bought gnocchi is your friend, especially when tossed with brussels sprouts and brown butter.

What to Listen To

The latest episode of “The Daily” is on Mexico’s Supreme Court decision on abortion.

You can reach Melina and the team at [email protected].