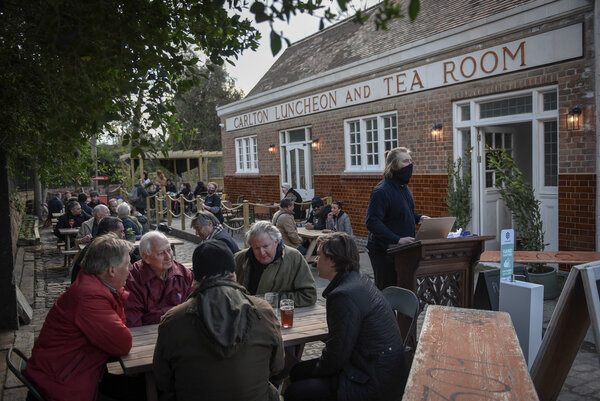 England eases out of lockdown

After 175 days of “maximum stringency level” government restrictions, people in England rushed to hairdressers, pubs, gyms and stores, as some of those rules started to be lifted. Scotland and Wales will reopen outdoor and some indoor dining on April 26.

The government has said it hopes to lift almost all restrictions by June 21, during one of the most successful Covid vaccine campaigns in the world — nearly half of Britons have received at least one dose — and after long closures that tamped down the rapid spread of the B.1.1.7 variant.

But much has not bounced back: Theaters, with a few exceptions, cannot come back until May. Many pubs that had made it through plagues and wars could not survive; 2,000 are estimated to have closed, along with 4,000 hair salons. And a death toll of 150,000 leaves thousands of families for whom this moment of joy and relief is tempered by grief.

European context: Britain now has one of the lowest infection rates in Europe, reporting just 1,730 new cases on Sunday. By contrast, France on Sunday recorded more than 34,000 new cases, and Germany surpassed three million total infections on Monday, with more than 13,000 new infections during the previous day.

Economic picture: After its worst recession in 300 years, Britain is projecting optimism about its recovery. The Bank of England predicts that by the end of the year, the size of the economy will be back where it was at the end of 2019. With many Britons having saved their money, retailers hope they will be eager to go shopping.

Australia has given up on the goal of vaccinating its entire population against Covid-19 in 2021. The delay comes after it abandoned the AstraZeneca vaccine for people under 50, switching them instead to the Pfizer-BioNTech vaccine. Those new shots are not expected to arrive until the end of the year.

After roughly a month of confinement, Italians in most of the country are now allowed to shop in stores besides supermarkets and pharmacies, and get their hair done. Movement across towns and regions is still strictly limited, and a 10 p.m. curfew remains in place.

An antibody cocktail developed by Regeneron offered strong protection against Covid-19 when given to people living with someone infected with the coronavirus, according to clinical trial results.

For more than a week, protests have descended into mayhem in Belfast and other parts of Northern Ireland, as the stress of the pandemic, coupled with Britain’s exit from Europe, has punctured the peace established 23 years ago with the Good Friday Agreement.

The strife has exposed the delicate nature of the truce between a largely Catholic side, which believes the territory should be part of Ireland, and a mostly Protestant side of British loyalists. Rioters, some as young as 13, have thrown gasoline bombs at the police and set buses on fire, and scores of police officers have been wounded.

Analysis: In an email to clients, Mujtaba Rahman, from the political risk consultancy firm the Eurasia Group, addressed the problems faced by the British prime minister. “Boris Johnson is wrestling with a problem that is too close to home for comfort: the worst violence on the streets of Northern Ireland for many years,” he wrote. The underlying causes, Mr. Rahman added, “were unlikely to be resolved quickly.”

The Iranian foreign minister, Mohammad Javad Zarif, threatened retribution against Israel for what he said was an attack at a uranium enrichment plant over the weekend that caused a power failure there.

In a statement broadcast by Iranian state television, Mr. Zarif was quoted as saying, “The Zionists want to take revenge because of our progress in the way to lift sanctions.” He added, “But we will take our revenge from the Zionists.”

His comments represent a new low in a yearslong shadow war between the two countries, and the episode at the plant will set back Iran’s nuclear program by months. Though Iran has long maintained that the program is peaceful and aimed at energy development, Israel sees it as an existential threat, as Iranian leaders have often called for Israel’s destruction.

Response: The Israeli government formally declined to comment on whether it was involved in the blackout on Sunday, but American and Israeli officials confirmed to The Times that Israel had played a role.

Context: Dignitaries from a host of countries are still working in Vienna to revive a nuclear agreement with Iran, while Lloyd Austin, the U.S. defense secretary, was in Israel and met with its prime minister and defense minister.

Protests erupted after a police officer fatally shot a Black man in Minnesota not far from where Derek Chauvin is on trial for the death of George Floyd. The man, Daunte Wright, 20, had been pulled over for a traffic violation.

The Biden administration reached deals with Mexico, Honduras and Guatemala to increase enforcement aimed at reducing migration toward the U.S. border.

From Cambodia and the Philippines to Malaysia and Thailand, democracy is languishing, after it seemed to be surging in the region.

David Cameron, a former British prime minister, faces a formal investigation after revelations that he lobbied former colleagues by text message and over drinks on behalf of the Anglo-Australian finance firm Greensill Capital, which has now collapsed.

The worst frost in decades has ravaged the French wine industry, which was already reeling from the effects of the coronavirus pandemic and the tariffs imposed by President Donald Trump.

Prince William and Prince Harry released separate statements honoring their grandfather, Prince Philip, who died on Friday, as a man of service and a fun and loving relative.

The theme for the next two Met Galas is American style, with matching exhibitions from the Costume Institute of the Metropolitan Museum of Art.

The topography of the Moundbuilders Country Club golf course, in Newark, Ohio, is built around a Native American “stonehenge” — mounds prescribed by the cosmology of those who created them approximately 2,000 years ago as a way to measure the movement of the sun and the moon through the heavens.

Historians hope to preserve the ancient Octagon Earthworks as a UNESCO World Heritage site. But they face a problem: The golf club that leases the property is asking for $12 million to leave.

The art of signing a song

Signed singing typically involves a sign-language interpreter performing a song, often next to the singer. The best renditions don’t convey just the lyrics of a song; they also convey its emotion.

A good performance “prioritizes dynamics, phrasing and flow,” Corinna da Fonseca-Wollheim writes in The Times. Deaf singers prepare by experiencing a song however they can. Mervin Primeaux-O’Bryant, a deaf actor and dancer, tucked a small speaker into his clothes, so that he could feel the vibrations of “Midnight Train to Georgia” while recording an interpretation for a series of American Sign Language covers of seminal songs by Black women.

“Sometimes interpreters don’t show the emotions that are tied to the music,” Mr. Primeaux-O’Bryant said. “And deaf people are like, ‘What is that?’”

In his performance, Mr. Primeaux-O’Bryant tugged at an invisible whistle to correspond to the woo-woo of the band’s horns. To interpret a drawn-out “oh,” he used movements that gently extended the words, his hands fluttering into his lap.

For more: Watch a clip of Mr. Primeaux-O’Bryant’s performance here. Separately, GQ profiled Matt Maxey, who translates Chance the Rapper at his concerts.

See the Mesopotamian marshes, wetlands near Iraq’s southeastern border that have been partly restored after they were drained by Saddam Hussein.

“Rocks” is a boisterous, thoroughly absorbing portrait of Britain’s working-class immigrant community. It’s among our picks of international movies to stream right now.

Here’s today’s Mini Crossword, and a clue: The first “B” of B&B (three letters).

That’s it for today’s briefing. See you on Wednesday. — Natasha

P.S. Opinion announced new members of its video and audio teams, including Kirk Semple, who wraps up a five-year tour as a foreign correspondent in our Mexico City bureau.

The latest episode of “The Daily” is on Europe’s vaccination struggle.

Sanam Yar contributed. You can reach Natasha and the team at [email protected].

Tags: Briefing, Tuesday, Your
You may also like
Recent News: