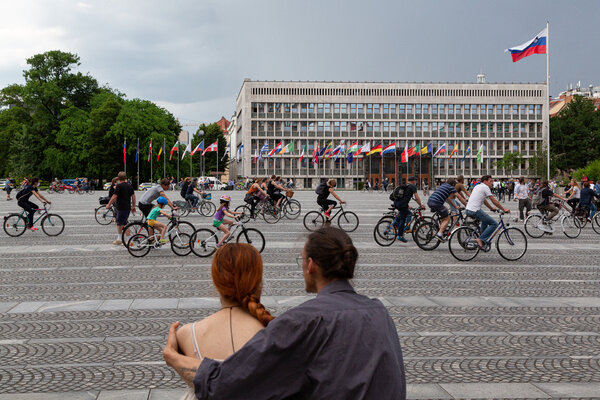 A right-wing populist wave in Eastern European countries such as Slovenia, Hungary and Poland, lifted by Donald Trump’s 2016 victory, has met a serious obstacle: Its leaders are not very popular, in large part because of their response to the coronavirus pandemic.

In Hungary, Prime Minister Viktor Orban is now being countered by an uncharacteristically united opposition. In Poland, the deeply conservative government has shifted to the left in economic policy to win back support. And in Slovenia, the approval rating of the hard-right governing coalition has fallen from 65 percent to 26 percent.

To oust these leaders and capitalize on growing fatigue with their divisive tactics, their opponents must continue getting their act together. In Hungary, a diverse and previously feuding array of opposition parties has united, while in Slovenia, Prime Minister Janez Jansa only narrowly survived an impeachment attempt by opposition legislators and defectors from his coalition.

Analysis: The Slovene philosopher Slavoj Zizek, a self-declared “moderately conservative Marxist,” said it was too early to write off the nationalist leaders in power. Their most important asset, he said, was the disarray of their opponents.

Related: In response to the detention of a young opposition journalist in Belarus, the U.S., the E.U., Britain and Canada imposed further sanctions over the country’s abuses of human rights.

An election in Ethiopia

Ethiopian voters headed to the polls on Monday for long-delayed parliamentary elections. But in 102 of the country's 547 constituencies, voters were unable to participate because of war, civil unrest and logistical failures. The ruling Prosperity Party, headed by Prime Minister Abiy Ahmed, is expected to win easily.

Not long ago, Abiy was perceived internationally as a shining hope for country and continent. After coming to power in 2018, he freed political prisoners, welcomed exiles home from abroad and quickly struck a landmark peace deal with Eritrea, Ethiopia’s old foe. Within 18 months, he had been awarded the Nobel Peace Prize.

But that halo has been brutally shattered by the civil war in the northern region of Tigray that has become a byword for atrocities against Ethiopian citizens, and led to accusations of massacres, sexual assaults and ethnic cleansing.

Catch up: Our reporters explain what led Abiy to conduct a military campaign in the Tigray region, and how the fighting has affected Ethiopia and the Horn of Africa. Here’s what you need to know.

From Opinion: Abiy promised his country peace. Instead, he is tearing it apart, writes Tsedale Lemma, the founder of Addis Standard magazine.

Spectators from Japan will be allowed to attend Olympic events in Tokyo this summer, ensuring a live though still limited audience after overseas fans were barred in March.

The announcement comes as Japan’s coronavirus case numbers drop and vaccination rates skyrocket. The country is now administering nearly one million doses of vaccines every day. About 18 percent of the population has received a first dose, and 7.3 percent is fully vaccinated.

Those who attend will have to wear masks — and will not be allowed to shout. Athletes will be tested regularly and have their movement limited.

U.S. Olympic track and field trials: The nine-time U.S. Olympic medalist Allyson Felix qualified for her fifth and final Summer Games. Michael Norman, who has run the fourth-fastest 400 meters of all time, is also going to Tokyo. Here are others who have made it.

The Biden administration has yet to distribute 55 million Covid vaccine doses it pledged to donate by the end of this month. Most will go to Covax, an international effort to vaccinate poorer nations.

Concerts with a standing audience will be able to resume in France on June 30, and nightclubs can reopen July 9.

The party of Armenia’s prime minister, Nikol Pashinyan, above, won a snap election over the weekend that also signaled at least grudging acceptance by voters of a peace settlement negotiated last fall with Azerbaijan.

Iran’s ultraconservative president-elect, Ebrahim Raisi, said he would not meet with President Biden and called for the U.S. to return to the 2015 nuclear deal.

The Republican Party’s growing irrelevance in urban and suburban areas of the U.S. is sidelining conservatives in centers of innovation and economic might.

The U.S. Supreme Court backed some payments to student-athletes, rejecting the N.C.A.A.’s argument that compensating athletes would alienate spectators.

An artist who secretly filmed thousands of female students on a Chinese university campus and ranked them “from the prettiest to the ugliest” set off a furor after his work was exhibited in a Shanghai museum.

Researchers in Israel have made progress in developing bacterial sensors that glow in the presence of a chemical linked to land mines and other deadly explosives.

An exquisite stretch of the Asi River has come to symbolize the identity politics that divide Israeli society.

On one side is the Free the Asi campaign, a mostly Mizrahi group fighting for public access to a cherished beauty spot. On the other is a kibbutz eager to maintain its hard-earned assets and tranquil lifestyle — and unwilling to share. “We live here,” said one kibbutznik. “This place was nurtured by us.”

‘The Hunchback of Notre Dame’ at 25

In 1996, Disney released an animated film with a musical number about lust, sin and hellfire. The movie’s plot involved the threat of genocide against Roma people. Yet somehow, “The Hunchback of Notre Dame” earned a G rating from a review board of parents.

“That’s the most R-rated G you will ever see in your life,” Tab Murphy, one of the film’s screenwriters, told The Times. For the movie’s 25th anniversary, Sarah Bahr unpacked how Disney made such a dark children’s film.

The movie changed some things from its source material, a dreary 19th-century Victor Hugo novel. It added talking gargoyles, and the two main characters didn’t die at the end. Because Disney did not want to take on the church, Hugo’s troubled archdeacon, Claude Frollo, became an evil magistrate.

Still, Disney executives took a relatively hands-off approach. “They were like, ‘You write the story you want to tell, and let us worry about our brand,’” Murphy said. (The film’s marketing did tell a different story. Its tagline was “Join the party!”)

Some of the movie’s themes have stood the test of time. Frollo feels like a “very contemporary” villain in the #MeToo era, the film’s co-director noted. “Maybe, in retrospect, ‘Hunchback’ was a bridge too far,” Alan Menken, who composed the film’s score, said. “But God, am I glad they took that bridge too far.”

Honey-soy braised pork is a slow cooker main dish that’s truly “set it and forget it.”

In his deeply personal new novel, “Home Stretch,” the Irish entertainer Graham Norton describes coming home and finding both one’s self and the place wholly transformed.

Tour Alaska in an R.V.

That’s it for today’s briefing. See you tomorrow. — Natasha

P.S. Tiffany Harness, a longtime editor at The Washington Post, is joining The Times’s Washington bureau as our new foreign policy editor.

The latest episode of “The Daily” is on a crucial U.S. Supreme Court decision on voting rights.

Sanam Yar wrote today’s Arts and Ideas. You can reach Natasha and the team at [email protected].

Tags: Briefing, Tuesday, Your
You may also like
Recent News: