A jail sentence for Sarkozy.

We’re covering a jail sentence for Nicolas Sarkozy, the high-tech arsenal used in Myanmar’s crackdown and promising results from the AstraZeneca vaccine. 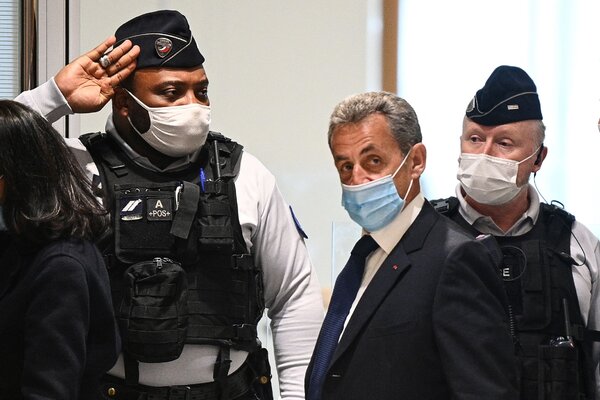 Sarkozy gets jail sentence for corruption

Nicolas Sarkozy, the former president of France, was convicted and sentenced to at least one year in jail on charges of corruption. Mr. Sarkozy, who has vowed to appeal the verdict, was accused of trying to obtain confidential information from a judge by offering to help him land a job.

This is only the second time in modern French history that a former president has been convicted of a crime. The conviction does not bar Mr. Sarkozy, who still holds considerable sway among conservatives, from running for office, although he has not publicly expressed any such desire.

Further charges: Mr. Sarkozy is scheduled to stand trial later this month in a separate case involving his 2012 campaign over charges that he exceeded strict limits on campaign spending. In another case, he faces accusations that his 2007 campaign received illegal financing from the government of the Libyan strongman Col. Muammar el-Qaddafi, who died in 2011.

Myanmar’s generals, who staged a coup a month ago, have a sophisticated tech arsenal at their disposal, including Israeli-made surveillance drones, iPhone cracking devices from Europe and American hacking software.

Critics say that the armed forces used the facade of democracy to justify the sensitive cybersecurity and defense purchases from Western countries during Myanmar’s five years of civilian-military rule that ended with the coup on Feb. 1. Some of these technologies are now being deployed by the military to target opponents.

Government budget documents reviewed by The New York Times catalog millions of dollars earmarked for technology that can mine phones and computers, track people’s locations and listen in on their conversations.

New developments: New charges were brought on Monday against Daw Aung San Suu Kyi, the civilian leader who was deposed in the coup. She now faces up to nine years in prison. A hearing was held behind closed doors, and a lawyer for Ms. Aung San Suu Kyi said he was blocked from attending.

Street-level protests: Photographers from The Times documented the anti-junta protests that have been regularly occurring for the past month.