We’re covering the travel bans imposed on Britain, a snap election in Israel and the rehabilitation of gibbons in Thailand. 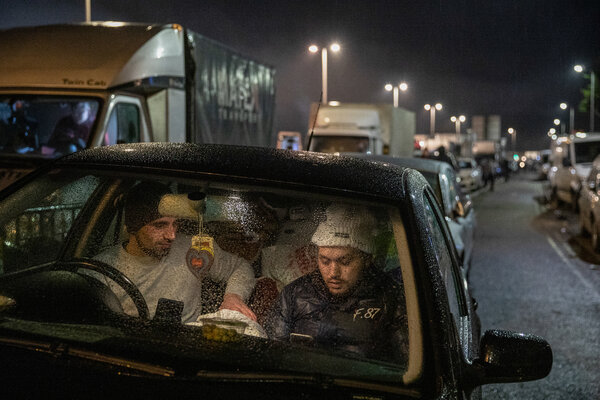 Britain and France reopened their border to select travelers on Tuesday and inched closer to a deal that would allow freight trucks to resume travel between the two countries.

France closed its borders for 48 hours on Sunday, fearing the spread of a new and possibly more transmissible variant of the coronavirus that has appeared in Britain. More than 1,500 trucks were left stranded, with some drivers sleeping in their trucks for two nights.

The European Commission urged bloc members to lift blanket bans and ensure essential travel with Britain. More than 50 governments have put in place measures to close the doors on Britain. Experts are skeptical that travel bans can stop the spread of new coronavirus variants — especially if they are already widespread.

France will fast-track citizenship for about 700 foreign frontline workers exposed to the virus, including health care workers, child care workers, housekeepers and cashiers.

Antarctica is no longer the last continent free from the coronavirus after 36 people stationed at a Chilean research base tested positive.

Congress passed a $900 billion stimulus package to help Americans and businesses grappling with the economic and health toll of the pandemic.

Officials in South Korea are scrambling to secure more intensive-care beds after an explosion of coronavirus infections.

A fresh political crisis has Israel heading for its fourth early election in two years. The Israeli Parliament dissolved itself at midnight local time after failing to meet the deadline for approving a new budget, forcing a new election on March 23.

At the heart of the crisis lies deep, mutual distrust in the so-called unity government, an uneasy coalition sworn in just seven months ago that pairs Prime Minister Benjamin Netanyahu’s conservative Likud party with the centrist Blue and White party of his main rival, Benny Gantz.

Finger-pointing: Mr. Netanyahu, whose corruption trial is scheduled to move into an intensive stage in early 2021, and Mr. Gantz have blamed each other for the crisis.

President-elect Joe Biden insisted that more relief would come after his inauguration next month, calling the latest stimulus legislation a “down payment” on a bigger bill. “Congress did its job this week,” he said, adding, “I can and I must ask them to do it again next year.”

Mr. Biden said he planned to put forward to Congress in the new year a plan that would include more funding to distribute the coronavirus vaccine to 300 million people, expand testing and send a new round of stimulus checks to Americans. But he said the details would be a matter of negotiation.

Opinion: Will the relief bill do enough? “As someone who spent many years at the Federal Reserve as a macroeconomic forecaster, I have my worries,” writes the economist Claudia Sahm, the architect of the Sahm Rule, a recession indicator.

If you have 8 minutes, this is worth it

Gibbons, the smallest of the apes, were once widespread across much of Asia, but deforestation and hunting have greatly reduced their numbers. In the 1990s and early 2000s, when displaying wild animals in bars was part of Thailand’s nightlife scene, young gibbons were sometimes taught to smoke, drink alcohol and eat human food.

Now, there is hope for the species. Our reporter looked at how at least a dozen rehabilitation centers in countries across Southeast Asia are undertaking the slow process of socializing and freeing gibbons recovered from the illegal wildlife trade.

Russian hack: The hackers who broke into U.S. government agencies got access to the email system used by the Treasury Department’s top leadership. It was the first detail of how deeply Moscow burrowed into the Trump administration’s networks.

Journalist murders: The number of journalists killed as a result of their work more than doubled in 2020, according to the Committee to Protect Journalists. Armed conflict and gang violence made Mexico and Afghanistan among the deadliest countries for reporters globally.

Morandi Bridge: The 2018 collapse of a bridge that killed 43 people in Genoa, Italy, was a result of problems in the structure’s conception, design, construction and eventual maintenance, according to an independent report made public on Monday.

Drilling in Norway: The country’s Supreme Court on Tuesday rejected a lawsuit brought by environmental groups seeking to invalidate licenses for new oil exploration in the Arctic. The activists had invoked Norway’s constitutional right to a clean environment. The ruling clears the way for more drilling.

Snapshot: Europe’s frontline workers, like those working at the Pitié-Salpêtrière University Hospital in Paris, above, have been the heroes and mainstays of an onerous year for the continent. These photographs tell the story of the infections that nearly broke Europe’s hospitals — exhausting, infecting and killing doctors and nurses.

Keeping tradition alive: The hallowed choir of King’s College, Cambridge, spent months rehearsing for its Christmas Eve service, which is broadcast worldwide. Its hope was to perform it live.

What we’re reading: This Columbia Journalism Review report about a reckoning at Magnum Photos, the world’s most prestigious photo agency, comes highly recommended from Amelia Nierenberg of the Briefings team.

Cook: This tangy, turmeric-stained, sheet-pan vinegar chicken with crushed olive dressing makes the most of the bits left behind on the pan.

Watch: This season’s movies with queer characters may be a largely chaste affair, but their comforting formulas also tell L.G.B.T.Q. viewers that they are seen.

Do: As 2020 ends, and with vaccination against the coronavirus ramping up, here’s what we know about how travel will change in the coming year.

We can help you celebrate the holidays with our At Home collection of ideas on what to read, cook, watch and do while staying safe at home.

A seemingly more contagious variant of the coronavirus, identified by scientists in Britain, has sparked alarm around the world. Here’s what scientists have learned about it so far.

Is the British variant some kind of new supervirus?

No. It’s just one variation among many that have arisen as the coronavirus has spread around the world. Mutations arise as a virus replicates, and this variant — known as B.1.1.7 — has acquired its own distinctive set of them.

Is it more contagious than other viruses?

It appears so. In preliminary work, researchers in Britain have found that the virus is spreading quickly in parts of southern England, displacing a crowded field of other variants that have been circulating for months.

However, a virus lineage’s becoming more common is not proof that the lineage spreads faster than others. It could grow more widespread simply through luck. For instance, a variant might start out in the middle of a crowded city, where transmission is easy, allowing it to make more copies of itself. Still, the epidemiological evidence gathered so far from England does seem to suggest that this variant is very good at spreading.

Does it cause more severe disease?

There is no strong evidence that it does, at least not yet. But there is reason to take the possibility seriously. In South Africa, another lineage of the coronavirus has gained one particular mutation that is also found in B.1.1.7. This variant is spreading quickly through coastal areas of South Africa. And in preliminary studies, doctors there have found that people infected with this variant carry a heightened viral load. In many viral diseases, this is associated with more severe symptoms.

Will the variant render the new vaccines ineffective?

No. Most experts doubt that it will have any great impact on vaccines, although it’s not yet possible to rule out any effect.

That’s it for this briefing. See you tomorrow.

Thank you
Theodore Kim and Jahaan Singh provided the break from the news. You can reach the team at [email protected]

P.S.
• We’re listening to “The Daily.” Our latest episode reflects on the lives of four people we’ve lost to Covid-19.
• Here’s our Mini Crossword, and a clue: The elf in “Elf” (five letters). You can find all our puzzles here.
• The word “vaxications” — vacations some people are rushing to book for after the pandemic — appeared for the first time in The Times yesterday, as noted by the Twitter bot @NYT_first_said.
• Poynter recently talked to our visual journalist Stuart Thompson about his interactive article showing when you can expect to get vaccinated.

Tags: CARES Act;Coronvirus Stimulus
You may also like
Recent News:
This website uses cookies to improve your user experience and to provide you with advertisements that are relevant to your interests. By continuing to browse the site you are agreeing to our use of cookies.Ok