The final day of the Trump presidency. 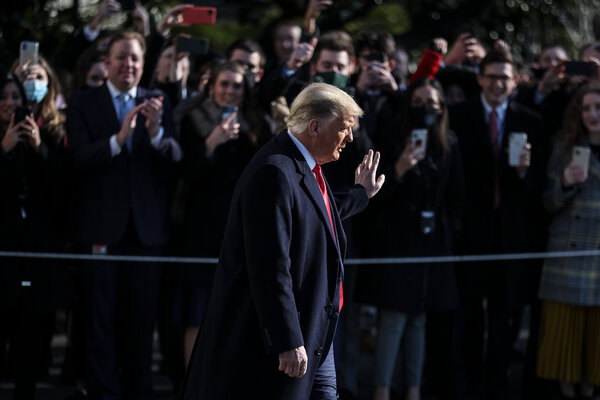 The final day of the Trump presidency

President Trump delivered a defiant and unapologetic farewell speech to the nation in a 20-minute video released on Tuesday, declaring that he “took on the tough battles” and vowing that “the movement we started is only just beginning.”

In one of his final official acts, Mr. Trump pardoned Stephen K. Bannon, the former White House chief strategist who was charged with defrauding political donors. Mr. Bannon had yet to stand trial, making his pardon a particularly unusual one.

Almost as soon as Mr. Trump leaves office, he will face a financial minefield, the details of which were revealed in a New York Times investigation last September. Many of his problems have been exacerbated by his turbulent, divisive presidency.

Global aftermath: Mr. Trump’s imprint on the world will linger. Through his “America First” rhetoric, he galvanized other nations to put themselves first, too.

Inauguration: Joe Biden will become president of the United States today in a scaled-back inauguration ceremony. (Here’s how to watch.) Last night, he assumed the role of mourner in chief during a somber ceremony commemorating the 400,000 Americans who have died from the coronavirus.

After a sluggish start to inoculation efforts on the continent, the European Union’s executive arm said on Tuesday that the bloc’s 27 member states should aim to vaccinate at least 80 percent of health care workers and citizens over the age of 80 by March, and at least 70 percent of their whole populations by this summer.

“We are racing against time, but not against each other,” said Stella Kyriakides, the E.U. health commissioner. “And we’re all racing together as one team.”

Related: Hoping to salvage border-free travel across the bloc, the commission also opened a debate over so-called vaccination certificates, which could permit easier travel for people who’ve gotten shots.

More than 400,000 people in the United States who had the coronavirus have died, according to data compiled by The New York Times. That is the equivalent of wiping out a city the size of Oakland, Calif.

As the authorities in Germany prepare stricter lockdown measures, some German states are planning guarded quarantine centers for the very few who repeatedly disobey quarantine rules.

The U.S. accuses China of genocide

The U.S. State Department declared on Tuesday that the Chinese government is committing genocide and crimes against humanity through its repression of Uighurs and other mostly Muslim minority groups in the western Chinese region of Xinjiang.

The move is expected to be the Trump administration’s final action on China, made on the administration’s last full day. Citing the use of forced sterilizations, birth control and family separations to destroy Uighur identity, officials said they hoped the move would spur other countries to follow suit in rebuking China.

What it means: The declaration could lead President-elect Joe Biden to impose sanctions on China. The finding adds to a long list of U.S.-China tension points, but it also gives the president-elect leverage.

Related: A proposed amendment to a trade deal between Britain and China would give British high courts power to say whether genocide is occurring in Xinjiang, The Guardian reported.

If you have 12 minutes, this is worth it

The call of the void

Even before the pandemic, American culture was embracing numbness as an antidote for the overload of digital capitalism — sensory-deprivation “float tanks,” noise-canceling headphones, the expensive nothing of open-plan start-up offices.

Alongside so much despair, mass quarantine has represented a final fulfillment of the pursuit of nothingness, particularly for the privileged classes who could adapt to it in relative comfort. But is it really an escape — or another trap?

Aleksei Navalny: A team led by the Russian opposition leader published a sprawling investigation on Tuesday describing a secret billion-dollar palace built for President Vladimir Putin on the Black Sea. On Monday, Mr. Navalny was jailed for 30 days ahead of a court decision that could put him behind bars for years.

Thai monarchy: A former civil servant who shared audio clips on social media that were deemed critical of Thailand’s monarchy was sentenced to 43 years in prison by a criminal court in Bangkok. It was the longest sentence yet for violating Thailand’s tough lèse-majesté law, which makes it a crime to defame senior members of the royal family.

Arab Spring anniversary: Ten years after Tunisia’s uprising, the country has become a democracy, with a right to free speech that is rare in the Arab world. But as youth unemployment remains high and corruption rampant, some Tunisians wonder if the revolution was worth it.

Snapshot: Above, the funeral of a flight attendant who died when Sriwijaya Air Flight 182 crashed after taking off from Jakarta. As the authorities piece together what happened, the uncertainty has compounded the grief of the 62 victims’ families. Funerals have begun, even for those whose remains have not been found.

Poetic justice: At today’s ceremony in Washington, Amanda Gorman, 22, the youngest inaugural poet in U.S. history, will read a work she finished after the riot at the Capitol two weeks ago.

Cricket: Indians are celebrating a remarkable win against Australia in a four-match series that is being called one of the greatest triumphs in India’s cricketing history. “Nothing comes close to this — it surpasses all,” the team’s head coach said.

“Origine non-animale”: For the first time in France, the Michelin Guide has awarded a star to a fully vegan restaurant. ONA, on the Atlantic coast near Bordeaux, was also among 33 restaurants that received green stars for their sustainable approaches.

What we’re reading: This ProPublica report collates information from more than 500 videos from the Capitol attack in Washington, offering a view of what it looked like from inside the mob.

Cook: These red curry lentils with sweet potatoes are cooked with an aromatic blend of Thai spices, then simmered in coconut milk until they’re fall-apart tender.

Read: Octavia Butler committed her life to turning speculative fiction into a home for Black expression. Here’s where to start with her books.

Unplug: With some thoughtful folding and a little tape, you can make your own hand-held maze game out of newspaper.

Look after yourself. At Home has our full collection of ideas on what to read, cook, watch, and do while staying safe at home.

Over the past four years, Doug Mills, a Times photographer, has taken tens of thousands of shots of President Trump. As Mr. Trump ends his tumultuous presidency today, Mr. Mills reflected on his nonstop job covering a relentless four years.

In what ways have the past four years been more challenging for you than in previous administrations?

It’s been the most consuming four years in memory for everyone in the White House press corps. President Trump was the most unpredictable commander in chief in my 38 years of covering the White House. He drove news cycle after news cycle each and every day, and I was there for the majority of them.

What was your own personal interaction with him like?

President Trump does know me by name and has pointed me out on a number of occasions. During a G7 summit in Canada, he told French President Emmanuel Macron and German Chancellor Angela Merkel that I was one of the world’s best photographers, but that I worked for The New York Times.

While I was covering President Trump’s dinner with the Queen of England at Buckingham Palace, he pointed me out to the queen and said, “That’s Doug Mills of The New York Times.” I was shocked and just looked at the queen and said, “Your Majesty,” and the photo op was over.

Out of all the shots you took, is there one in particular you’re proud of?

I have a number of memorable photos. Mr. Trump, House Speaker Nancy Pelosi and “the clap.” Mr. Trump with a lightning bolt. A shot of Mr. Trump walking to St. John’s Church from the White House after protesters were removed from Lafayette Park.

How would you summarize the past four years for you as a photographer?

It’s been a great four years for presidential photography — incredibly exhausting but very rewarding. I’ve enjoyed every minute of it.

That’s it for this briefing. Have a good Wednesday.

Thank you
Theodore Kim and Jahaan Singh provided the break from the news. You can reach the team at [email protected]

P.S.
• We’re listening to “The Daily.” Our latest episode is on how Republicans see the attack on the U.S. Capitol.
• Here’s our Mini Crossword, and a clue: Snake that can weigh up to 60 lbs. (three letters). You can find all our puzzles here.
• The Times’s website debuted 25 years ago this week. “With its entry on the Web,” an article at the time noted, “The Times is hoping to become a primary information provider in the computer age.”
• The Times announced “The Ezra Klein Show,” a new podcast about ideas that matter, from New York Times Opinion.