The ethical quandary of vaccine passports.

We’re covering the backlash against vaccine passports, sanctions imposed by the Biden administration on Russia and winter surfing. 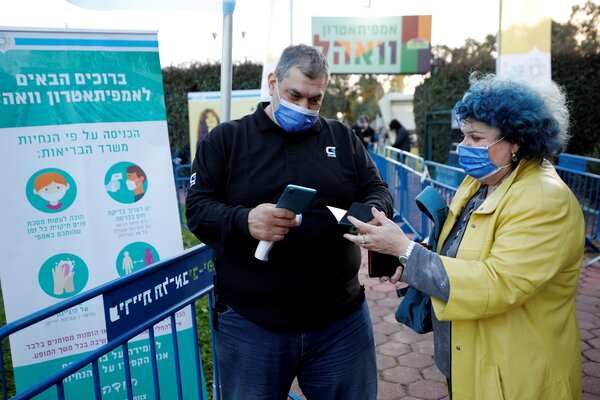 The ethical, and practical, risks of vaccine passports

Vaccine passports — a fast-track route for people who have been vaccinated against the coronavirus to resume normal activities — are gaining traction as a way to restart economies.

Israel has already rolled out a “Green Badge,” while several European countries are considering doing the same. President Biden has asked federal agencies to explore options, while some airlines and tourism-reliant industries and destinations expect to require them.

The proposal has provoked a backlash among those who say vaccine passports will exacerbate wealth gaps and discrimination, allowing the fortunate few even more advantages. Vaccines are already going overwhelmingly to rich countries and privileged racial groups within them.

Quotable: “If vaccines become a passport to doing different things, we’re going to see the communities that have been already hardest hit by Covid being left behind,” said a public health expert.

President Biden announced Tuesday that there would be enough doses of the coronavirus vaccines available for the entire adult population in the United States by the end of May, though he said it would take longer to inoculate everyone.

People in Manaus, Brazil, who had immunity from previous bouts of the coronavirus contracted it again as the P.1 variant spread there, according to three studies. The research has not yet been published in scientific journals.

The Czech Republic is struggling with a surge in new cases that has left its health care system teetering, raised the death rate to one of the highest in the world and prompted a lockdown.

The U.S. on Tuesday accused Russia’s F.S.B. intelligence agency of orchestrating the poisoning of Aleksei A. Navalny and announced its first sanctions against the Russian government for his poisoning and imprisonment. The actions closely mirrored those that were taken by European countries and Britain last October and expanded on Monday.

U.S. officials said it was part of an effort to show unity in the Biden administration’s first confrontations with the Kremlin.

None of the sanctions were specifically directed at President Vladimir V. Putin or the country’s oligarchs but instead froze the assets of Alexander Bortnikov, the director of the F.S.B. The Biden administration also declassified intelligence that found the F.S.B. was behind the attack on Navalny.

Dynamics: While many U.S. presidents have come into office declaring they would seek a reset of relations with Russia, President Biden has done the opposite, promising to push back.

Tags: Coronavirus;COVID-19, Volvo Car
You may also like
Recent News: