We’re covering Simone Biles’s exit from the team final at the Tokyo Olympics and a return to masks in the U.S. 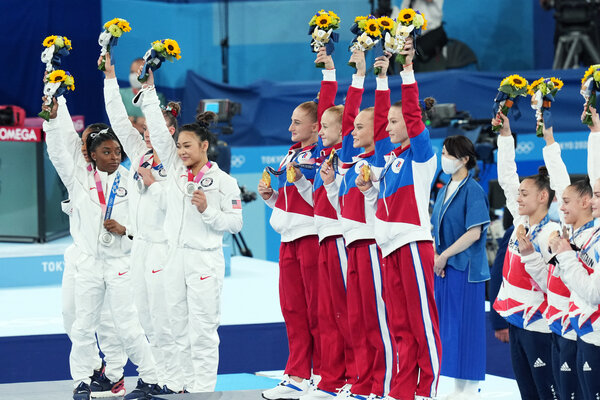 Biles pulls out of Olympic event

Simone Biles left the women’s gymnastics final at the Tokyo Games on Tuesday because she wasn’t in the right place mentally to compete, she said. It is not clear whether she will compete in her individual events.

As Team U.S.A.’s star, she was expected to bring home gold medals, and the weight of expectations loomed over her. On Tuesday, she said she began “fighting all of those demons,” and couldn’t hold them back.

“This Olympic Games, I wanted it to be for myself when I came in — and I felt like I was still doing it for other people,” Biles, 24, said. Here are the latest updates.

It was the biggest upset for the U.S. at the Tokyo Games. She had faltered on a vault and walked off the mat, all but ensuring Russia would take the gold.

Osaka exit: Hours earlier, another superstar athlete, Naomi Osaka, was upset in the third round of the women’s singles tennis tournament by a player with a far lower ranking. She also spoke of the pressures of the Olympic stage.

A return to masks in the U.S.

Just two months ago, the Centers for Disease Control and Prevention said fully vaccinated people did not have to wear masks indoors. But on Tuesday, the top U.S. health agency recommended that people vaccinated for the coronavirus wear masks indoors in areas of the country where the virus is surging.

The shift came amid worries about breakthrough infections in vaccinated people and Covid surges, driven by the highly infectious Delta variant, in states like Missouri and Florida. Officials also recommended that everyone in schools be masked regardless of vaccination status.

C.D.C. officials were swayed by new research showing that even vaccinated people may carry great amounts of the variant virus in the nose and throat, hinting that they also may spread it to others, according to officials.

Response: There was sure to be resistance to the rules from pandemic-fatigued Americans, especially in regions where virus worries are muted. Vaccines remain effective against the worst outcomes of Covid-19, including those involving the Delta variant.

Context: About 69 percent of adults have received at least one shot in the U.S. Vaccinated Americans are losing patience with those who have yet to receive the shot.

Bhutan has fully vaccinated most adults, with many of the second-round shots administered over the past week, including to yak herders at high altitudes.

The Biden administration is considering mandating federal employees to be vaccinated or face regular testing, social distancing, mask requirements and restrictions on travel.

Mexican workers in factories that produce goods for the U.S. are getting American vaccines.

Tong Ying-kit, who was arrested last year for striking police officers with his motorcycle, was convicted on Tuesday of terrorism and inciting secession.

It was the first trial held under the security law imposed by Beijing last year, and was seen as a test of how Hong Kong’s courts would enforce it. Under the law, Tong could be sentenced to life in prison.

The court will likely hand down a sentence within weeks. Tong was denied bail and a jury trial.

“I think we would be kidding ourselves if we think the national security law would not be enforced in the way the Chinese government conceived it,” said Steve Tsang, director of the SOAS China Institute in London. “The idea that the Hong Kong judiciary would be able to moderate it would be a mistake.”

The case: Prosecutors argued that a banner Tong had carried containing a popular protest slogan — “Liberate Hong Kong, Revolution of Our Times” — amounted to a call for independence from China, which is banned.

North and South Korea have reopened ​military and other diplomatic hotlines after a hiatus of nearly 14 months. The North said it wanted to improve ties “as early as possible” amid a deepening economic crisis.

U.S. Defense Secretary Lloyd Austin traveled to Southeast Asia to reassure governments that the U.S. was still invested in a region that has been aggressively courted by China.

Nuclear experts in the U.S. have identified digging in a field in China for what appears to be 110 nuclear missile silos. The discovery is prompting questions about Beijing’s strategy.

At least one person was dead, 16 workers were injured and four more were missing after an explosion at a waste disposal plant in Leverkusen, Germany. Federal authorities declared the area an “extreme threat.”

Four police officers who confronted the mob during the Capitol riot testified at the first hearing of a congressional committee investigating the attack.

A new lawyer for Britney Spears has moved to have the singer removed from a restrictive conservatorship agreement.

As Beijing has intensified its crackdown in Xinjiang, more Uyghurs living abroad have spoken out about mass internment camps and abuse. But increasingly their families stuck at home are paying the price, and in some cases going to prison for years.

What’s new at the Tokyo Games

Four sports are making their Olympic debuts this summer. Others, including softball, have returned. Here’s a look.

Karate. Athletes can medal in kumite, a sparring event, and kata, which focuses on solo movements. “I’m looking forward to showing the world the beauty of my sport,” Sakura Kokumai, the first American to qualify in karate, wrote in USA Today.

Baseball and softball are back for the first time since 2008, partly because both are popular in Japan (whose softball team beat the U.S. for the gold).

Getting a new sport to the Games can take years. But many athletes say the wait is worth it. As the surfer Kolohe Andino told The Times, “This is so sick, just being a part of it.”

Emily Mortimer’s adaptation of the novel “The Pursuit of Love,” set in 1930s England, explores expectations for women then and now.

The 2021 Booker Prize longlist was announced, with 13 novels in the running for the top award, including Rachel Cusk’s “Second Place” and Kazuo Ishiguro’s “Klara and the Sun.”

P.S. David Halbfinger, our former Jerusalem bureau chief, will be the next politics editor.

The latest episode of “The Daily” is about vaccine mandates.

Ian Prasad Philbrick wrote the Arts and Ideas section. You can reach Melina and the team at [email protected].