Presidential debate, coronavirus in Sweden, Aleksei Navalny: Here’s what you need to know. 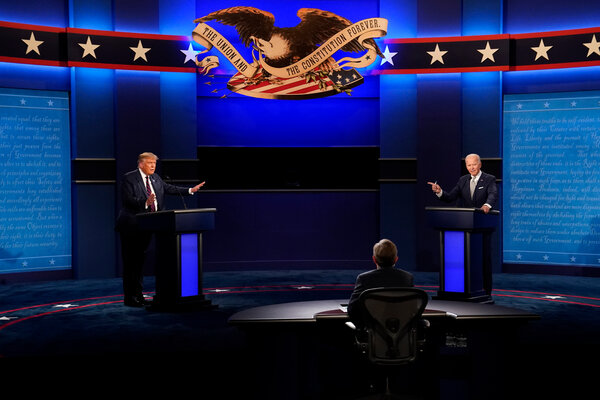 A presidential debate unlike any other

Over more than 90 minutes of interjections and altercations, in which the moderator Chris Wallace repeatedly asked President Trump to let former Vice President Joe Biden speak, bluster and crosstalk quickly led to name-calling and heckling. The resulting debate on Tuesday night was nearly impossible to watch, doing little to shed light on the biggest issues facing the United States or the substantive differences between Mr. Trump and Mr. Biden.

As the debate, the first of three between the presidential candidates, came to a close, Mr. Biden implored the American people to vote, with a reminder that they alone would decide the election. In response, Mr. Trump ranted about perceived slights during his 2016 campaign and said he would ask the Supreme Court to “look at” ballots cast in the election.

Trump’s interruptions: “Mr. President, I am the moderator of this debate, and I would like you to let me ask my question and then you can answer it,” said Mr. Wallace.

For more: The Times summarized the debate with live coverage, a news analysis and minute-by-minute fact-checking, as well as video of the debate itself.

As many European nations tighten restrictions amid a surge of coronavirus cases, new infections in Sweden, if tipping upward slightly, have remained surprisingly low.

The country took an unusual approach to the pandemic last spring by refusing to impose a lockdown, as its leading health officials argued that limited restrictions were sufficient and would better protect against economic collapse. Many scientists blamed that policy for a spike in deaths, even as libertarians who were critical of lockdowns pointed to Sweden as a model.

Swedish officials acknowledge some mistakes — particularly in nursing homes, where the death toll was staggering — but the country’s current low caseload, compared with sharp increases elsewhere, raises questions about whether it has found a sustainable balance — or whether the recent numbers are just a temporary aberration.

Nursing home operators and employees across the United States experienced something close to elation as 14,000 residential facilities serving the elderly received rapid-result test machines that can deliver results in 15 minutes.

The Netherlands tightened restrictions and warned that its most severe wave of infections yet was likely to get worse. Indoor gatherings are limited to four people, and masks will be required in Rotterdam, The Hague and Amsterdam.

Israel’s second national lockdown is likely to last at least a month and perhaps much longer, as the country’s soaring infection rate of around 8,000 confirmed new cases a day remains among the highest in the world.

New York City officials announced on Tuesday that the daily rate of positive coronavirus tests had jumped to 3.25 percent, after more than a month at around 1 percent. The mayor called it “cause for real concern.”

The poisoning of the Russian opposition leader Aleksei Navalny last month could be a chance for Germany to take a tougher stance against Russia. But experts remain skeptical that either Berlin or the European Union has the political will to take concrete action, or to unite split interests, that would send a clear message to Moscow.

Russia maintains that it played no role in the poisoning of Mr. Navalny, who was flown for treatment to Germany and emerged from a coma there; last week, the foreign ministry in Moscow accused Berlin of dramatizing the episode. But the evidence, including a finding that Mr. Navalny was attacked with a military-grade chemical from the Soviet-designed Novichok group, suggests otherwise.

Analysis: Though use of that toxin would ordinarily be a breach of the Chemical Weapons Convention, “the political will to take a harder stance against Russia is absent,” said one think tank leader. Berlin’s own policy toward Moscow remains “stuck in its internal contradictions and compromises,” he said.

How Australia became a solar powerhouse

Australia is the second-largest exporter of coal in the world. But the country has also quietly become a renewable energy powerhouse. One in four homes has panels on its roof, well ahead of the numbers in Germany, Japan and California, a top solar power user in the U.S.

Most Australians who have embraced solar do not appear to have done so to fight climate change, our reporters write. They are responding to government incentives, lower prices for solar panels and rising electricity rates. “This is the economically rational position to take,” the New South Wales energy minister said.

Joe Biden: The Democratic Party’s presidential candidate released his 2019 tax returns on Tuesday, which showed that he and his wife had an adjusted gross income of $985,000 last year and paid federal income taxes of $288,000.

Cardinal Pell: Three years after leaving for Australia to face sexual abuse accusations, and five months after that country’s highest court overturned his conviction on those charges, Cardinal George Pell is expected to return to the Vatican today.

Charlie Hebdo: The man suspected of stabbing two people last week outside the former Paris office of the French satirical magazine admitted to investigators that he’d wanted to set the building on fire.

Boris Johnson: Nine months after leading the Conservatives to a landslide victory in general elections, polls show that the British prime minister has frittered away support within his party, ceded ground to the once-hapless opposition and lost favor with the public.

Japan Airlines: The carrier said it would retire the phrase “ladies and gentlemen” from in-flight announcements and pledged to use inclusive language.

Snapshot: All over the world, theater is creeping back — albeit with certain coronavirus-specific alterations. “It was like coming home,” said a lighting designer who worked on London’s first fully staged indoor musical since the shutdown, “Sleepless: A Musical Romance,” above. “Everyone was smiling all the time, which sounds sort of Pollyannaish, but it’s true.”

Lives lived: Lillian Brown, who powdered the noses of nine presidents from Dwight D. Eisenhower to Bill Clinton while offering advice on diction, apparel and camera angles, died at 106 this month.

What we’re reading: In this GQ interview, the curator of the Black Magazine Covers Instagram account, Donovan X. Ramsey, “explains why he curates an Instagram page on Black magazine covers, how they tell a specific cultural history and why he won’t amplify Kanye,” writes Kim Severson, our Food correspondent.

Cook: This fabulously healthy kale and quinoa salad with tofu and miso has enough bite to serve as a meal.

Listen: With many opera houses and concert halls still closed by the pandemic, the musical action has moved online. Here’s a selection of 10 highlights to stream in October.

Read: These five books on design focus on the likes of claw foot bathtubs, sommeliers’ gadgetry and mahogany linen chests — objects to revel in.

Staying at home can be relaxing and — dare we say it — even fun, with our At Home collection of ideas on what to read, cook, watch and do.

A team of Times reporters obtained thousands of pages of President Trump’s tax records, which show losses and tax avoidance. Russ Buettner and Susanne Craig, who along with Mike McIntire investigated the tax data, talked to our podcast “The Daily” about what they learned.

Along with our colleague Mike McIntire, what information have you both obtained?

What we can see in these is that after 1995, he was still recovering from that billion dollars in losses that he accumulated. He was trying to reinvent himself, branch into new things, but it wasn’t really taking hold. His casinos were failing again.

Susanne: All of a sudden, he has this new financial lifeline — “The Apprentice.”

Russ: Eventually, that wealth stream, just the money from his fame that requires no business expertise, totals $427 million. We’ve now looked at almost 30 or 40 years of Donald Trump’s tax returns and his financial records, analyzed his inheritance. This wellspring that came from “The Apprentice” — that’s an amount of income unlike anything he experienced in any other aspect of his life.

It sounds like a big thing you’re learning is that when it comes to the kinds of deals in which somebody else borrows the Trump name and uses it, Donald Trump is swimming in money, but when it comes to a business that he buys and tries to operate, like a big golf course, those become big financial black holes.

Russ: The less decision-making authority Donald Trump has on a business, the more money that business is going to make. And the more he’s involved in designing a business, setting it up and creating a business plan, the more likely it is to have trouble. He finds himself in 2015 again needing a complete reinvention — and what does he decide to do?

Susanne: The next thing he does is run for president.

That’s it for this morning’s briefing. Thanks for starting your day with The Times.

P.S.
• We’re listening to “The Daily.” Our latest episode is about the investigation into President Trump’s taxes. (There’s an excerpt in the Back Story.)
• Here’s our Mini Crossword, and a clue: “Rhythm instruments” (five letters). You can find all our puzzles here.
• The accidental haiku — “Today I only / had to put on my Zoom shirt / for 13 minutes” — appeared in The Times on Tuesday, according to the Twitter bot @nythaikus.
• Our Supreme Court reporter Adam Liptak recently joined ABC Australia’s “RN Breakfast” to discuss Judge Amy Coney Barrett.

Tags: Briefing, Wednesday, Your
You may also like
Recent News:
This website uses cookies to improve your user experience and to provide you with advertisements that are relevant to your interests. By continuing to browse the site you are agreeing to our use of cookies.Ok