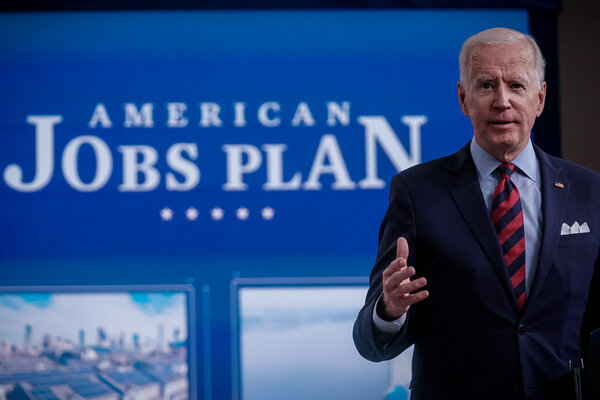 The Biden administration has unveiled its corporate tax overhaul, intended to raise $2.5 trillion over 15 years to pay for an infrastructure program. “Debate is welcome. Compromise is inevitable. Changes are certain,” President Biden said, but he stressed that “inaction is not an option.”

“America’s corporate tax system has long been broken,” the Treasury secretary Janet Yellen wrote in a Wall Street Journal op-ed coinciding with the plan’s release. In addition to raising the headline corporate tax rate, the administration’s proposal takes aim at companies that shift profits abroad, especially to low-tax havens like Bermuda or Ireland. Some of the changes could be enacted by regulation, but things like raising the corporate tax rate will need the approval of Congress.

What’s in the plan? Here are the main provisions:

Raise the corporate tax rate to 28 percent. The increase from 21 percent would put the U.S. more in line with other big countries and, the administration says, lift corporate tax receipts that have fallen to their lowest levels as a share of the economy since World War II.

Ensure big companies pay at least 15 percent in taxes. A minimum tax on book income for companies with annual profits of $2 billion or more would mean firms that use deductions, exemptions and other methods to reduce their liability wouldn’t be able to go lower than a certain level. If this had been in place in recent years, 45 companies would have faced the tax.

Strengthen the global minimum tax to end profit shifting. This would double the rate on foreign intangible assets introduced by the Trump administration in 2017. The Biden administration also says it will push for global agreement on common rates, to discourage companies from shopping around for tax jurisdictions. Finance ministers from the Group of 20 nations said yesterday that they hoped to agree on a global minimum tax rate by midyear, but previous efforts have faltered when it came to nailing down the details.

Beef up the I.R.S. The agency’s enforcement budget has fallen by 25 percent over the past decade, and the proposal would bolster the budget for experts in complex corporate litigation.

What effect would it have? A Wharton School budget model concluded that the corporate tax rate increase would “not meaningfully affect the normal return on investment,” but when combined with the proposed minimum tax on book income, business investment would fall somewhat. All told, by 2050 the tax provisions would reduce government debt by more than 11 percent from the current baseline, but also reduce G.D.P. by 0.5 percent over that period.

Business groups aren’t happy about it. The Chamber of Commerce said the plan would “hurt American businesses and cost American jobs.” The Business Roundtable said it “threatens to subject the U.S. to a major competitive disadvantage.” Republican lawmakers have also argued that it’s bad for business, but the White House was quick to note that the former Trump economic adviser Gary Cohn, a key player in the 2017 tax cut, said last June that “I’m actually OK at 28 percent.”

“I think there could be bipartisan interest in about half of what the president proposed on the spending side, but of course the corporate tax increases would be a non-starter,” Rohit Kumar, the head of PwC’s Washington tax policy group and a former aide to Senator Mitch McConnell, told DealBook. He’s not convinced there’s even enough support among Democrats for tax increases.

For more on this, see our sister newsletter, The Morning: “Corporate Taxes Are Wealth Taxes”

The counting of votes in the Amazon union drive begins soon. The union seeking to represent workers at a warehouse in Alabama said that 3,215 ballots were cast, representing 55 percent of eligible workers. The hand count of the ballots will begin either later today or tomorrow.

Britain curbs the use of AstraZeneca’s vaccine for people under 30. The decision came as regulators increasingly suspect a link between the shot and rare blood clots. While Britain has enough vaccines from other makers to avoid a slowdown in its inoculation efforts, the concerns may dent vaccination efforts in developing countries.

Senator Mitch McConnell walks back his comments on companies and politics, sort of. The minority leader conceded that his criticism of companies for speaking out against voting restrictions was not spoken “artfully.” (Democrats noted that Republicans have benefited from corporate donations.) “They are certainly entitled to be involved in politics,” Mr. McConnell said.

Tencent’s biggest shareholder sells a slice of its holdings for $14.7 billion. Prosus, the Europe-based tech investor, sold 2 percent of its stake in the Chinese tech giant in the biggest-ever block trade (breaking its own record). Prosus still owns a 29 percent stake in the company.

The N.R.A.’s chief concedes that he hid the group’s Chapter 11 plans. Wayne LaPierre said at a bankruptcy court hearing that he hadn’t told top executives or his board of the arrangement. He is accused of having the gun-rights group file for Chapter 11 to stymie an investigation by New York State’s attorney general.

Many parts of the economy have held up during the pandemic — but corporate real estate isn’t one of them. Landlords and cities are worried that remote working will irreversibly sap demand for office space, The Times’s Peter Eavis and Matthew Haag report.

The numbers are grim for landlords. The national office vacancy rate in city centers has hit 16.4 percent, according to Cushman & Wakefield, a decade-long high. In Manhattan alone, over 17 percent of all office space is available, the most in over 30 years. And rents on existing space could also face pressure from new buildings coming online, representing 124 million square feet.

Some are staying hopeful. Landlords like Boston Properties and SL Green haven’t suffered big financial losses from the pandemic, thanks to many tenants being locked into long leases. They’re also betting many companies want their workers to meet in person to better collaborate and train younger employees.

The final damage won’t be known for some time. Companies are still trying to figure out their real estate needs, based on their work policies: While Amazon expects a return to an “office-centric culture,” JPMorgan Chase’s Jamie Dimon said that the bank may need only 60 seats for every 100 employees after the pandemic.

“We are just going to be bleeding lower for the next three to four years to find out what the new level of tenant demand is,” Jonathan Litt, the chief investment officer of Land & Buildings, told The Times.

“Even though I’m sort of a pro-crypto, pro-Bitcoin maximalist person, I do wonder whether at this point Bitcoin should also be thought in part of as a Chinese financial weapon against the U.S.”

— Peter Thiel, the tech investor, on how cryptocurrency threatens the U.S. dollar. “China wants to do things to weaken it, so China’s long Bitcoin,” he added.

New York recently became the first U.S. state to offer Covid-19 “vaccine passports,” while the governors of Florida and Texas banned them. Airlines, universities, event venues and other businesses are also testing various methods of vaccine verification. The starkly different approaches reflect a wider national and global debate on proof of health in the pandemic era.

“There are a lot of ways it could be done badly,” Jay Stanley of the American Civil Liberties Union told DealBook, but he suggested a “narrow path” to a certification system that could work. The ideal system would be paper-based with a digital supplement, Mr. Stanley argues, so that people who lack access to technology aren’t disadvantaged. Encrypted data would be stored on a decentralized network, protected with a public key for vaccine providers and private keys for users to ensure privacy. Fairness also demands a standardized approach, rather than the current variety of systems, which could result in “a mess for civil liberties, equity and privacy,” he said.

The Biden administration has said it won’t mandate vaccine passports, a point it reiterated this week, but it is working on standards the private sector can adopt. New York partnered with IBM on the state’s opt-in Excelsior Pass, which allows access to restricted activities and venues.

The certificates can raise a slew of social and legal issues, depending on who is asking for proof of vaccination and why, according to the Stanford law professor David Studdert. Government mandates trigger more concerns than opt-in programs, he noted, and companies will have different considerations if they seek certification from customers or workers. Given all the variations, he said, “within reason” the market should decide what works, and officials should avoid both mandates and bans: “Different communities and employers have a different tolerance for risk.”

Mr. Studdert co-wrote an article in The New England Journal of Medicine on the ethical considerations.

“The Argument” podcast by Times Opinion goes into the privacy implications.

A top S.E.C. official warned of “significant and yet undiscovered issues” with SPACs, the latest words of caution from the regulator about blank-check funds. (WSJ)

Twitter is said to have held talks to buy Clubhouse for $4 billion, though negotiations aren’t currently active. (Bloomberg)

Shares in Deliveroo rose after retail investors were allowed to start trading in the food delivery service. (CNBC)

China is offering tax breaks and other perks to financiers in Hong Kong to keep them from leaving the territory. (NYT)

Uber and Lyft are “throwing money” at drivers to bring them back to work. (FT)

“No publicly traded company is a family. I fell for the fantasy that it could be.” (NYT Op-Ed)

How the pandemic pummeled the world’s most famous shopping streets. (Quartz)

Former employees of Marcus, the consumer lender that is key to Goldman Sachs’s future, reportedly say they were burned out by an ambitious product launch schedule. (Insider)

All about muons, the subatomic particles that seem to disobey the known laws of physics. (NYT)