The must-have accessory for many businesses this winter is basic, but lately it has been hard to find: the humble space heater.

As coronavirus cases surge, and as people shun or are even barred from gathering in indoor spaces, restaurants, hotels and office buildings are installing outdoor heaters on sidewalks and terraces in a bid to retain customers and tenants.

The effort can seem like an existential quest. A rise in demand has left some products back-ordered for months, possibly jeopardizing prospect for some of businesses getting through the pandemic intact.

“Surviving this pandemic has become like jungle warfare,” said Mark Barak, the chief executive of La Pecora Bianca, a restaurant that has decked out the outside areas of its three New York locations with about 70 heaters.

“I joke with my staff that I have become an outdoor-dining general contractor. That’s how I now spend so much of my time,” Mr. Barak said.

Distributors say they are having trouble keeping up with demand.

Gas-Fired Products, a North Carolina manufacturer of heating equipment, is selling three times as many heaters as it did in 2019, said Paul Horne, the vice president of the company. Its products include $1,200 versions with enclosed flames that promise to stay lit in 40-mile-per-hour winds.

“Any opportunity that people can find to go to a restaurant or hang out with friends outside, they’re going to take advantage,” Mr. Horne said. 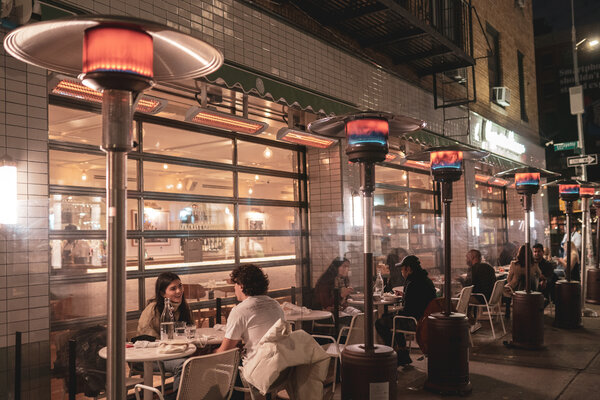 The profile of customers is changing, vendors say. Heaters once mostly ended up on backyard patios, but they are quickly becoming fixtures of commercial buildings.

Just a year ago, businesses made up 10 percent of the clients of Radtec, a Texas-based distributor. Today, that share is 50 percent, said Adam Minton, the sales director of the company, whose products include tabletop heaters and ones shaped like pyramids.

Interest has come from several northern cites grappling with falling temperatures, but New York in particular is a hive of activity, Mr. Minton said, adding that the city has gone from being “no market” last year to the company’s largest today.

“There is such a demand that people say, ‘I don’t care if it glows or doesn’t glow. I just need heat,’” Mr. Minton said. “They don’t even ask about cost or coverage area.”

For some businesses, like restaurants, the timing can be crucial. As states like California and Michigan move to impose business restrictions, including shutting down indoor dining, having a space outside can offer a chance to survive the pandemic.

“I think it’s going to be a very difficult winter, and a lot more restaurants will close,” said Andrew Moger, the chief executive of BCD, a restaurant consulting group whose clients have included Westville, Dinosaur Bar-b-que and Benihana.

The surge in demand has caught some stores flat-footed. Major hardware retailers like Lowe’s and Home Depot are frequently out of stock, say shoppers who have combed through aisles.

“Like all retailers, we have seen high demand for many items, and our merchants and supply chain teams have been working to replenish what they can,” a Home Depot spokeswoman said.

Many of the outdoor heaters sold in the United States are made in China, which is struggling to keep up with the heightened interest. Chinese factories used to take two months to fill Radtec’s orders, and they now take three, Mr. Minton said.

Yet prices for heaters, which come in propane, natural gas or electric versions, don’t yet seem to be climbing, possibly because the huge volume of business allows manufacturers to keep their costs down, analysts say.

Despite skyrocketing use, the cost of propane is similarly stable, said Tucker Perkins, the chief executive of the Propane Education and Research Council, an advocacy group based in Washington.

In 2019, U.S. consumers burned through 284 million gallons of propane in heaters, grills and other appliances, Mr. Perkins said. In 2020, that number is likely to nearly double to 500 million gallons.

Still, those small-scale uses are a drop in the bucket compared with consumption in the overall national market, which is about 10 billon gallons a year, he said.

New York, which mostly banned the gas for use in commercial heat lamps until reversing course in October to help struggling restaurants, “is now the epicenter of the growth,” Mr. Perkins said, with 60,000 gallons consumed a day.

Snapping up heaters this summer, well in advance of the winter season, appears to have been a smart move for business owners. Well-timed renovations also helped, said Mr. Barak of La Pecora, whose SoHo location was being remodeled when the pandemic hit.

During construction, workers upgraded gas lines and installed wiring, improvements that might have been difficult to pull off in a place that was already open, he said. The renovation included wall-mounted electric heaters as a backup and a transformer to power them.

To prepare for La Pecora’s opening late last month, Mr. Barak also added rows of mushroom-shaped free-standing heaters, powered by both natural gas and propane, along the sidewalk at his restaurant, which can accommodate 80 people outside and 40 inside. All told, the heat-related extras cost “a few hundred thousand dollars, he said, adding, “I don’t think anyone else has more heat per seat than we do.”

New York may have relaxed some heater rules, but fires remain a concern. Businesses are still not allowed to store full propane tanks on-site over fears of setting off an explosion. But heaters churn through about four gallons a day — the amount inside a 20-pound tank used for most grills — meaning restaurants with heaters burning day and night can face regular fuel shortages.

And existing propane services tended to punch out early, leaving businesses with late-night hours stranded. To meet that demand, Derek Kaye, who ran a feet of food trucks before the pandemic stunted his business, switched gears this summer to start NYC Propane Delivery, a six-employee business that supplies tanks to restaurants daily from dawn to midnight. “Hopefully, that will continue,” Mr. Kaye said.

Offices, too, are trying to make their outdoor spaces cozier. At Industry City, a sprawling office, retail and industrial complex on the Brooklyn waterfront, its owners Jamestown and Belvedere Capital Real Estate Partners have spent $1 million on heaters and tents, purchased this summer, to encourage tenants to socialize in the alleys between the development’s repurposed brick buildings. About 70 heaters are now installed, including an electric version in an existing yurt, said Kathe Chase, Industry City’s director of leasing.

Of the 8,500 employees who worked in the complex before the pandemic, 50 percent still regularly show up for work, Ms. Chase said. At the same time, 500,000 square feet, or 12 percent of the complex, have leased since March, she added.

“Nobody has a crystal ball about what will happen,” Ms. Chase said. “But this is not just a Covid fix. We think people will live differently after this.”

But not every business can heat outdoor spaces, and some are turning to rudimentary alternatives.

Tishman Speyer, a national office landlord, is not permitted to place heaters on some high-floor terraces of its Rockefeller Center, over concerns that wind could send them flying. Portable heaters also can’t be positioned too close to walls, said Thais Galli, a Tishman managing director.

But many of the employees who do come into the office — about 15 percent of pre-pandemic totals — prefer to hold meetings on the terraces, so wind-blocking options, like Plexiglass screens, rows of evergreens and plastic igloos, are now under consideration, Ms. Galli said.

At One Federal Street, a Tishman high-rise in Boston, the landlord hands out complimentary single-use fleece blankets and wool hats for those who want to grab a breath of fresh air on the lawn-lined ninth-floor terrace, where most heaters are also verboten.

Tags: Commercial Real Estate, Heater
You may also like
Recent News:
This website uses cookies to improve your user experience and to provide you with advertisements that are relevant to your interests. By continuing to browse the site you are agreeing to our use of cookies.Ok