President Biden’s $400 billion proposal to improve long-term care for older adults and those with disabilities was received as either a long overdue expansion of the social safety net or an example of misguided government overreach.

Republicans ridiculed including elder care in a program dedicated to infrastructure. Others derided it as a gift to the Service Employees International Union, which wants to organize care workers. It was also faulted for omitting child care.

For Ai-jen Poo, co-director of Caring Across Generations, a coalition of advocacy groups working to strengthen the long-term care system, it was an answer to years of hard work.

“Even though I have been fighting for this for years,” she said, “if you would have told me 10 years ago that the president of the United States would make a speech committing $400 billion to increase access to these services and strengthen this work force, I wouldn’t have believed it would happen.”

What the debate over the president’s proposal has missed is that despite the big number, its ambitions remain singularly narrow when compared with the vast and growing demands imposed by an aging population.

Mr. Biden’s proposal, part of his $2 trillion American Jobs Plan, is aimed only at bolstering Medicaid, which pays for somewhat over half the bill for long-term care in the country. And it is targeted only at home care and at community-based care in places like adult day care centers — not at nursing homes, which take just over 40 percent of Medicaid’s care budget.

Still, the money would be consumed very fast.

Consider a key goal: increasing the wages of care workers. In 2019, the typical wage of the 3.5 million home health aides and personal care aides was $12.15 an hour. They make less than janitors and telemarketers, less than workers in food processing plants or on farms. Many — typically women of color, often immigrants — live in poverty.

The aides are employed by care agencies, which bill Medicaid for their hours at work in beneficiaries’ homes. The agencies consistently report labor shortages, which is perhaps unsurprising given the low pay.

Raising wages may be essential to meet the booming demand. The Labor Department estimates that these occupations will require 1.6 million additional workers over 10 years.

It won’t be cheap, though. Bringing aides’ hourly pay to $20 — still short of the country’s median wage — would more than consume the eight-year outlay of $400 billion. That would leave little money for other priorities, like addressing the demand for care — 820,000 people were on states’ waiting lists in 2018, with an average wait of more than three years — or providing more comprehensive services.

The battle over resources is likely to strain the coalition of unions and groups that promote the interests of older and disabled Americans, which have been pushing together for Mr. Biden’s plan. And that’s even before nursing homes complain about being left out.

The president “must figure out the right balance between reducing the waiting list and increasing wages,” said Paul Osterman, a professor at the Massachusetts Institute of Technology’s Sloan School of Management who has written about the nation’s care structures. “There’s tension there.”

Elder care has long been at the center of political battles over social insurance. President Lyndon B. Johnson considered providing the benefit as part of the creation of Medicare in the 1960s, said Howard Gleckman, an expert on long-term care at the Urban Institute. But the chairman of the House Ways and Means Committee, Wilbur Mills, warned how expensive that approach would become when baby boomers started retiring. Better, he argued, to make it part of Medicaid and let the states bear a large chunk of the burden.

This compromise produced a patchwork of services that has left millions of seniors and their families in the lurch while still consuming roughly a third of Medicaid spending — about $197 billion in 2018, according to the Kaiser Family Foundation. By Kaiser’s calculations, Medicaid pays for roughly half of long-term care services; out-of-pocket payments and private insurance together pay a little over a quarter of the tab. (Other sources, like programs for veterans, cover the rest.)

Unlike institutional care, which state Medicaid programs are required to cover, home and community-based care services are optional. That explains the waiting lists. It also means there is a wide divergence in the quality of services and the rules governing who gets them.

Although the federal government pays at least half of states’ Medicaid budgets, states have great leeway in how to run the program. In Pennsylvania, Medicaid pays $50,300 a year per recipient of home or community-based care, on average. In New York, it pays $65,600. In contrast, Medicaid pays $15,500 per recipient in Mississippi, and $21,300 in Iowa. 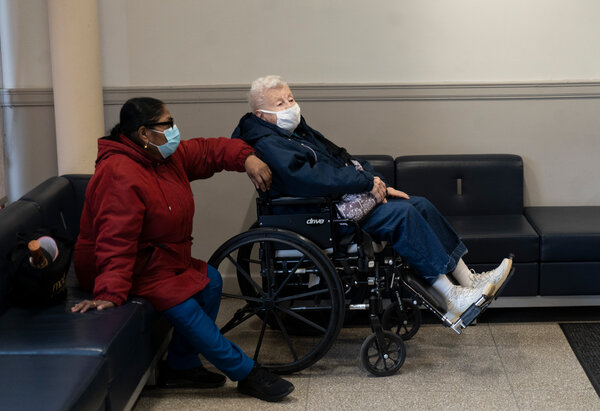 This arrangement has also left the middle class in the lurch. The private insurance market is shrinking, unable to cope with the high cost of care toward the end of life: It is too expensive for most Americans, and it is too risky for most insurers.

As a result, middle-class Americans who need long-term care either fall back on relatives — typically daughters, knocking millions of women out of the labor force — or deplete their resources until they qualify for Medicaid.

Whatever the limits of the Biden proposal, advocates for its main constituencies — those needing care, and those providing it — are solidly behind it. This would be, after all, the biggest expansion of long-term care support since the 1960s.

“The two big issues, waiting lists and work force, are interrelated,” said Nicole Jorwic, senior director of public policy at the Arc, which promotes the interests of people with disabilities. “We are confident we can turn this in a way that we get over the conflicts that have stopped progress in past.”

And yet the tussle over resources could reopen past conflicts. For instance, when President Barack Obama proposed extending the Fair Labor Standards Act of 1938 to home care workers, which would cover them with minimum-wage and overtime rules, advocates for beneficiaries and their families objected because they feared that states with budget pressures would cut off services at 40 hours a week.

“We have a long road ahead of passing this into law and to implementation,” Haeyoung Yoon, senior policy director of the National Domestic Workers Alliance, said of the Biden proposal. Along the way, she said, supporters must stick together.

Given the magnitude of the need, some wonder whether there might be a better approach to shoring up long-term care than giving more money to Medicaid. The program is perennially challenged for funds, forced to compete with education and other priorities in state budgets. And Republicans have repeatedly tried to curtail its scope.

Some experts have suggested, instead, the creation of a new line of social insurance, perhaps funded through payroll taxes as Social Security is, to provide a minimum level of service available to everyone.

A couple of years ago, the Long-Term Care Financing Collaborative, a group formed to think through how to pay for long-term elder care, reported that half of adults would need “a high level of personal assistance” at some point, typically for two years, at an average cost of $140,000. Today, some six million people need these sorts of services, a number the group expects to swell to 16 million in less than 50 years.

In 2019, the National Academy of Social Insurance published a report suggesting statewide insurance programs, paid for by a dedicated tax, to cover a bundle of services, from early child care to family leave and long-term care and support for older adults and the disabled.

This could be structured in a variety of ways. One option for seniors, a catastrophic insurance plan that would cover expenses up to $110 a day (in 2014 dollars) after a waiting period determined by the beneficiary’s income, could be funded by raising the Medicare tax one percentage point.

Mr. Biden’s plan doesn’t include much detail. Mr. Gleckman of the Urban Institute notes that it has grown vaguer since Mr. Biden proposed it on the campaign trail — perhaps because he realized the tensions it would raise. In any event, a deeper overhaul of the system may eventually be needed.

“This is a significant, historic investment,” Mr. Espinoza said. “But when you take into account the magnitude of the crisis in front of us, it’s clear that this is only a first step.”

Tags: Elderly care;Geriatrics, Wages
You may also like
Recent News: